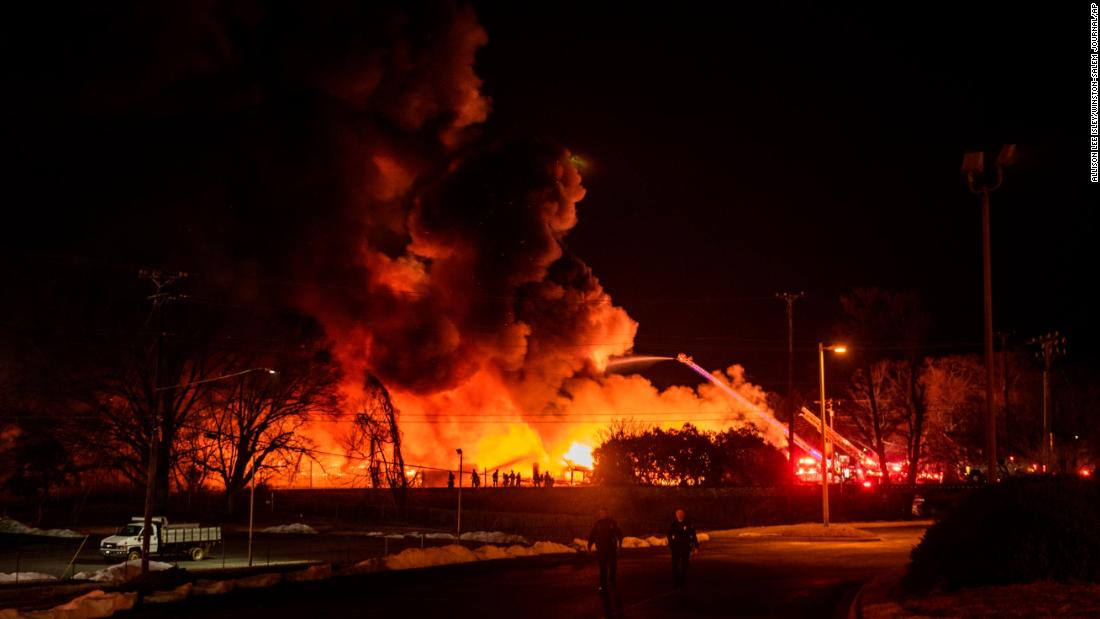 The potential for an ammonium nitrate explosion at the Winston Weaver Co. plant remained a top concern, fire officials said, as authorities scrambled to evacuate almost 2,500 homes within a mile of the blaze.

At one point, fire trucks were driving down every road in the evacuation zone — and going door-to-door in some places — using a public address system to urge residents to evacuate, Winston-Salem Fire Department Battalion Chief Patrick Grubbs said early Tuesday. He warned of poor air quality and asked that people call 911 only if “you are experiencing an emergency.”

The blaze began Monday night at the plant. After battling it for two hours, the fire department pulled back its crews after the blaze spread to a rail car containing ammonium nitrate, Grubbs said.

“Right now, the fire is still active, and there’s still potential for explosion. We’re asking all the citizens to evacuate the area for a 1-mile radius around it,” he said early Tuesday. “We do not know the full extent of the time we’ll be here. It will not be anytime soon that we’ll be leaving.”

A fire truck remains at the back side of the building dousing the fire, but no fire staff are there, Grubbs said. The department is accessing the scene every 15 to 20 minutes using drone teams, he said.

The cause of the fire remains under investigation, Grubbs said, and the fire department has been in touch with the company that owns the plant. The Winston Weaver Co. did not respond immediately to CNN’s request for information.

There was no imminent threat to the Forsyth facility, Bull said. Emergency officials recommended moving the prisoners as a precaution. They’ll be returned to Forsyth when it’s safe, he said.

Wake Forest University canceled classes Tuesday, the university said. The evacuation area includes a unit of on-campus housing, Deacon Place, and students on campus or living outside the 1-mile zone are encouraged to stay indoors and keep their windows closed, the school said. The Wellbeing Center, Benson Center and Z. Smith Reynolds Library are open for faculty, staff or students who need a place to stay.

“Travel in the evacuation area around 4400 North Cherry Street will become increasingly difficult as police begin to shut down roads and prohibit vehicle traffic. Faculty, staff and students are encouraged to evacuate as soon as possible. Use personal vehicles and carpool when possible. Parking anywhere on campus is allowed,” Wake Forest said early Tuesday.

At least 90 firefighters and up to about 150 emergency personnel — including police and others — have been working on the fire and evacuating the area, Grubbs said.