Millie Bobby Brown and Jake Bongiovi have been dating for just about a year, and they’ve become increasingly open about their relationship. They made their red carpet debut at the BAFTA awards this year, with Brown wearing an elegant black velvet and lace dress. They were both smiling and having fun in front of the cameras. 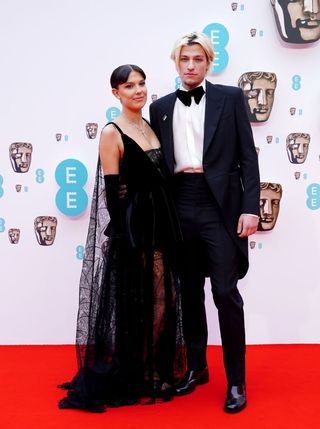 Here’s what we know about Jake Bongiovi and his relationship with Millie Bobby Brown so far.

Who is Jake Bongiovi?

The 19-year-old Syracuse University student is the son of rockstar JonBon Jovi and his wife Dorothea. He was accepted into Syracuse in 2020, and plans to get a doctorate. He calls himself an actor on his Instagram account, though he has said he has no interest in following his father’s footsteps in a music career. He has three siblings, Stephanie, Jesse, and Romeo.

Though he’s still a teenager, Bongiovi has a history of activism and helped stage a national student walkout to protest increasing gun violence in the U.S. while a sophomore at Pennington High School. The walkout was part of the response to the murder of 17 people killed in Parkland, Florida, in 2018.

“It’s enough. It’s happened too many times that we watch it,” he told nj.com at the time. “And we cannot let it go away this time.”

How long have Jake Bongiovi and Millie Bobby Brown been together?

They began appearing on one another’s Instagram timelines as long ago as June 2021, though some of their captions implied they were just friends.

In November of 2021, Brown share a picture of them at the London Eye, Newsweek reports, seemingly making everything Instagram official. In the blurry photo, Brown appears to be hugging Bongiovi as he embraces her and gives her a kiss.

Last month was Brown’s 18th birthday, and she threw a party at London’s Cirque Le Soir nightclub before heading to SoHo’s Windmill nightclub. They both shared photos of their costumes that night in which they dressed up as Barbie and Ken. Bongiovi wished Brown a happy birthday on Instagram before writing, “ily.”

Where does Jake Bongiovi live?

It doesn’t seem like Bongiovi necessarily lives in the U.K., but he’s definitely there a lot to visit Brown. He was in board school when the pandemic began, and in an interview People did with his father, Bon Jovi, he moved back home for a bit in recent years.

Was Jake Bongiovi at the Stranger Things premiere?

Brown and Bongiovi walked the red carpet together in Brooklyn on May 14, looking affectionate and happy in front of the cameras as they posed. 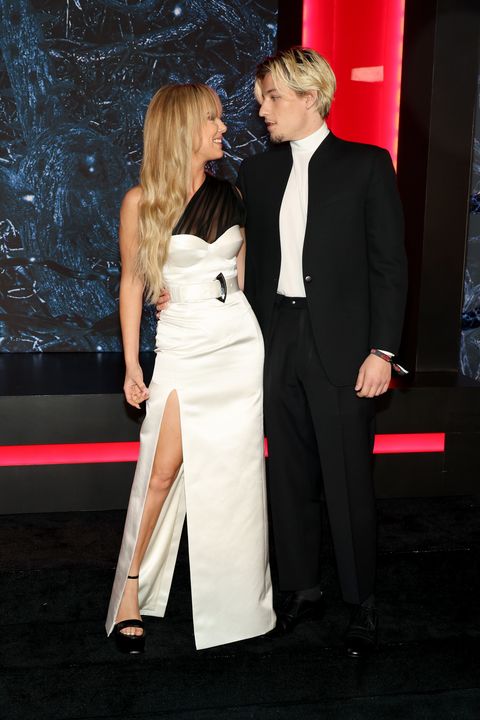 In June, Millie Bobby Brown shared meaningful post of them at a concert.

The couple loves attending concerts together and in mid-June they had a date night at a Harry Styles concert. Styles has been touring to promote his new album, Harry’s House, and Brown is clearly a big fan of the project. She referenced one of the album’s biggest hits in the caption of an Instagram post in which she and Bongiovi are embracing and kissing in the concert audience.

“alexa play love of my life by harry styles,” she wrote.

She also posted the two of them singing along to the song in her Instagram stories at the time, according to Hello Magazine, and she directed the lyric, “Baby, you were the love of my life,” right at her boyfriend.

In July of 2022, the couple enjoyed a little getaway in Italy.

Brown and Bongiovi enjoyed a little vacation in July on the island of Sardinia, Page Six reports, relaxing on a boat and enjoying the blue waters of the Mediterranean. They also enjoyed some time in each other’s arms, hugging and kissing throughout the day.

Brown was wearing a Louis Vuitton two piece in dark blue covered in light blue stars, with a coverup made from green mesh fabric. She sported a floppy straw hat to keep the sun out of her eyes and had a jaunty pink-patterned scarf tied around her neck. Bongiovi was wearing a bright blue shirt covered in a large pattern of daisies and striped swim trunks.

At one point, the couple noticed the cameras and Bongiovi shot them a thumbs up.

Brown seems to be on a bit of a European tour, and recently shared this photo of herself along a riverside.

She captioned it, “happy gal.”

In August of 2022, Brown was spotted wearing a gold band.

On Thursday, August 11, Brown and Bongiovi were walking through Little Italy in New York City enjoying a coffee when photographers caught a shot of a gold band on her ring finger. It does resemble a wedding band, but Brown is only 18-years-old and a bit young to be getting married. It could be a promise ring or even just a piece of personal jewelry.

That same day, Brown posted a photo to Instagram of herself and Bongiovi smiling at one another over an ice cream sundae and a clip where they seem to be playing “Dance Dance Revolution.”

Aimée Lutkin is the weekend editor at ELLE.com. Her writing has appeared in Jezebel, Glamour, Marie Claire and more. Her first book, The Lonely Hunter, will be released by Dial Press in February 2022.