Vladimir Putin: The West ‘has ignored’ Russia’s key security concerns and NATO ‘screwed us over’ 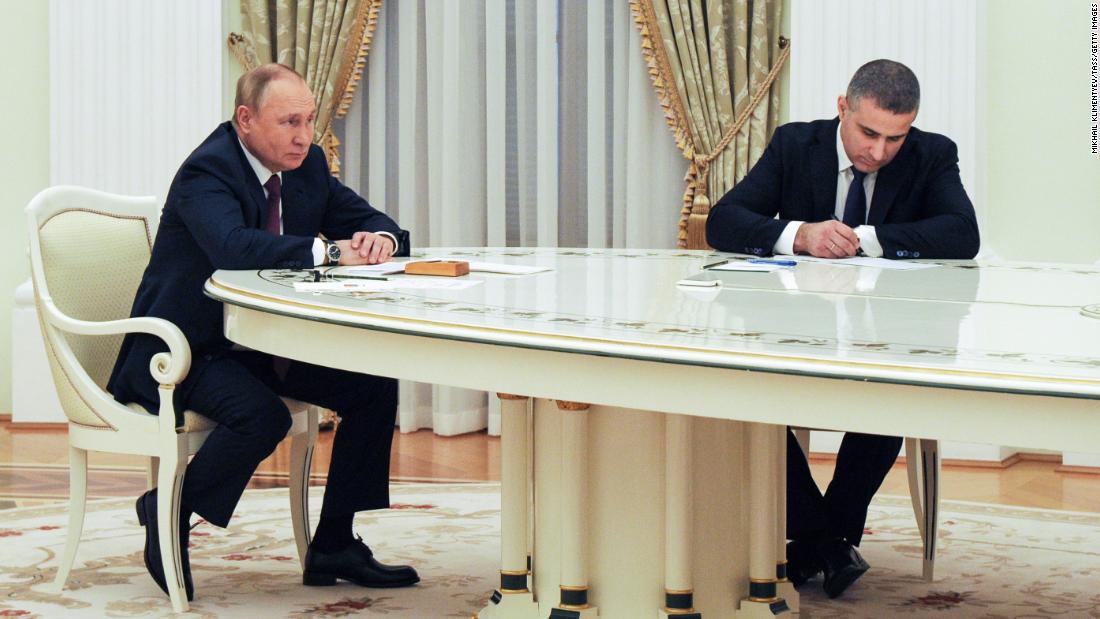 For weeks, Putin had said little publicly about the crisis sparked by Russia’s buildup of tens of thousands of troops near Ukraine’s borders, which has raised fears of a possible invasion.

But speaking at a Tuesday news conference following a five-hour meeting in Moscow with Hungarian Prime Minister Viktor Orban, Putin said: “It is already clear — I informed the Prime Minister about this — that the fundamental Russian concerns were ignored. We did not see an adequate consideration of our three key requirements.”

Putin added that Russia had not seen “adequate consideration of our three key demands regarding NATO expansion, the renunciation of the deployment of strike weapons systems near Russian borders, and the return of the [NATO] bloc’s military infrastructure in Europe to the state of 1997, when the Russia-NATO founding act was signed.”

Putin also accused the US directly of attempting to “draw us into armed conflict” over the Ukraine crisis by using the country as a “tool” for NATO operations. He claimed that Washington’s main goal is to force “allies in Europe to impose the very tough sanctions against us,” or “draw Ukraine into NATO.”

The US and NATO have said Putin’s demands — which include a promise to never expand eastward to countries including Ukraine — violate NATO’s open-door policy and are non-starters in negotiations.

Putin did not offer any solutions on Tuesday, but did say he was open to more talks.

“I hope that this dialogue will continue,” he said, adding: “I hope that we will eventually find this solution, although it is not an easy one, and we are aware of this. But what that will be, I’m not ready to say today, of course.”

Putin ended the news conference with a short lecture about what he characterized as NATO’s history of deceptions, claiming that the alliance promised to expand “not an inch” eastward. “They said one thing, they did another,” Putin said. “As people say, they screwed us over, well they simply deceived us.”

Russian officials have repeatedly made this claim in the past; the US and NATO have denied making such promises.

Putin also reiterated his opposition to the possibility of Ukraine joining NATO, and said Kyiv was attempting to retake Crimea — the Ukrainian territory annexed by Russia in 2014 — by military force, potentially bringing the alliance into open conflict with Russia.

“This [Crimea] is sovereign Russian territory, the question is closed for us,” he said. “Let’s imagine that Ukraine is a NATO country and starts these military operations. Then what, we should fight against the NATO bloc? So, has anyone thought about this? Looks like no.”

Diplomats from the US, Russia, Ukraine, NATO and the European Union have been engaged in a flurry of diplomatic activity in recent weeks.

US Secretary of State Antony Blinken and Russian Foreign Minister Sergey Lavrov held a phone call Tuesday. Following that call, a senior State Department official said Lavrov did not give an indication that Moscow will de-escalate from the border with Ukraine.

Blinken told Lavrov that if Putin “does not intend war or regime change,” then it was time to pull back troops and heavy weaponry and engage in serious, diplomatic discussions, the official said.

Lavrov responded that the escalation that the US was claiming was not occurring, the official said, but that it was merely Russia moving troops within its own borders.

US State Department officials confirmed Monday they had “received a written followup from Russia” to a document of proposals the US sent to the Kremlin last week on how to defuse tensions and pave the way for further security talks in response to Russia’s demands on security.

On Tuesday, however, the Kremlin said that Russia had not yet sent its “main reply” to the US. “There was a mix-up,” Kremlin spokesperson Dmitry Peskov said in a conference call. “It [the Russian correspondence] regarded a different matter. The main reply on this issue hasn’t been handed over, it’s still being prepared.”

Johnson accused Russia of “holding a gun to Ukraine” and warned that a potential invasion of Ukraine by Russia would be a “political” and “humanitarian disaster.”

“The potential invasion completely flies in the face of President Putin’s claims to be acting in the interests of the Ukrainian people,” Johnson said.

Zelensky said that should a war between Russia and Ukraine start it will be a “big war in Europe,” adding that there “will be no occupation of any territory or city in Ukraine… but there will be a bloody tragedy if the invasion of our country starts.”