The sky’s the limit for Durham country singer Robyn Ottolini 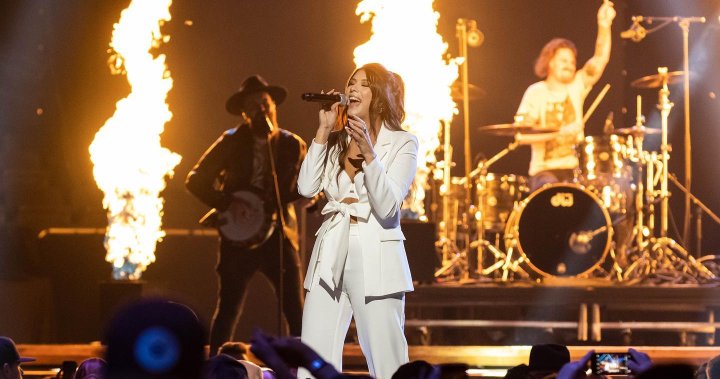 A local singer is rising through the charts after striking a deal with Warner Music Nashville last year.

Robyn Ottolini – who hails from Uxbridge, Ont., hit it big after getting noticed on TikTok for her hit single, F-150.

Global News first shared details about her hit last year, but due to the pandemic, she had yet to meet everyone in Nashville.

“It was so surreal. It’s crazy and now I’ve met everybody. I’ve travelled the U.S.”

Now she’s gone from that TikTok craze, streaming online for fans — to concerts in front of thousands of people.

Throughout 2021, the 26-year-old country singer has been across the U.S. doing radio tours and festivals, along with several performances here in Canada as well — including shows in Cavendish, P.E.I., and at the Calgary Stampede.

It was the first time the aspiring artist realized she had a massive fan base.

“It was a Robyn Ottolini show. It wasn’t cover bands and cover songs … I just remember it was all of the feelings,” she said.

Alan Cross: The future of the music industry is TikTok, and here’s why

Mark Fintelman, Robyn’s long-time friend and manager, says finally seeing her on the stage with fans in the crowd has been an unreal experience.

“To show up on stage and to see that connection in real life – Robyn on stage and fans in the crowd, and to hear them singing back her words, it’s just a whole different thing,” he says.

Ottolini has been playing in restaurants and bars across the region for the past several years and has even won a number of contests.

One of those places was The Second Wedge Brewery in Uxbridge, a location Ottolini played in a number of times. Co-owner of the brewery, Joanne Richter says being able to watch her rise to fame has been unbelievable.

“It’s amazing, it’s phenomenal. We feel like a little place of home, that we were blessed to have her play here for so many years,” says Richter.

The latest milestone for the singer was performing at the Canadian Country Music Awards (CCMA), on stage with a range of artists she’s looked up to.

“I’ve always wondered what it would feel like on stage. But I definitely kind of like black out,” she says. “You get into this like, ‘you’re doing this now’ and you just kinda do it. It was so much fun.”

She also took home the rising star award from that show.

But the excitement is far from over– in 2022, Ottolini will be sharing the stage with one of Canada’s biggest country singers, Shania Twain, at the Boots and Hearts Festival in Oro-Medonte, Ont.

“I’m such a realistic person and never thought that would be a thing, but it is. So next up — Shania, let’s do a song! Just kidding,” she said.