The Fabelmans review: Spielberg packs his magic into telling his own story 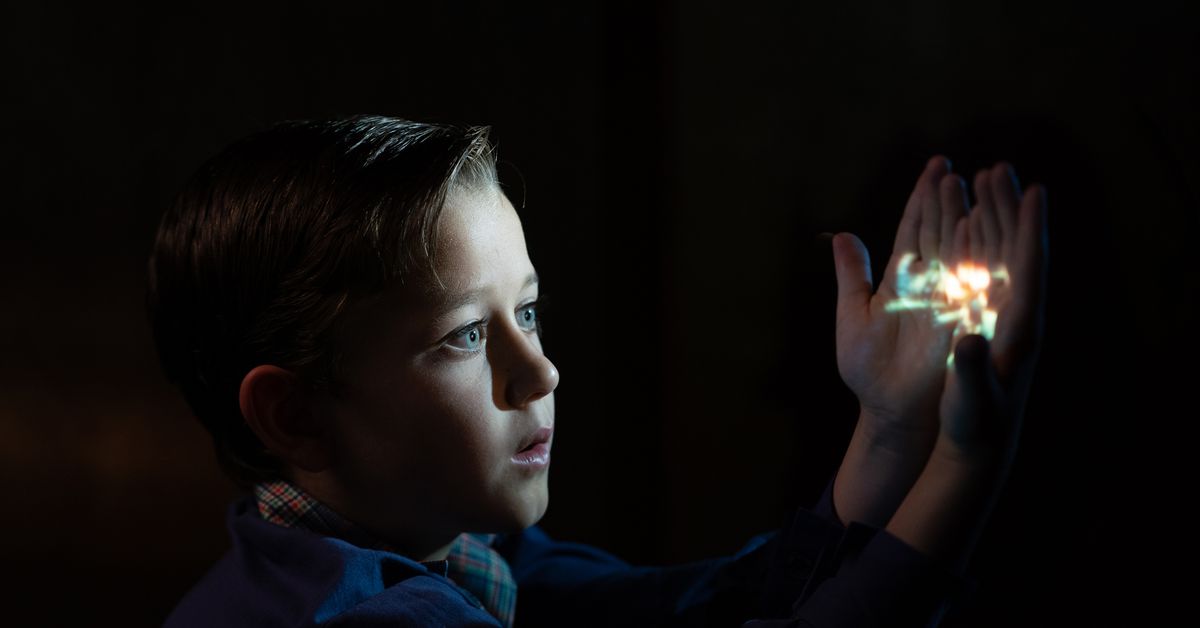 This review of The Fabelmans was originally published in conjunction with its premiere at Toronto International Film Festival. It has been updated and reposted for the theatrical release.

At the heart of nearly every Steven Spielberg film is the spirit of a boy who’s still saddened by his parents’ divorce, papering over his grief in cinema’s vast sandbox. You can see that kid’s pain unconsciously spilling out in the bickering mom and dad characters from Close Encounters of the Third Kind. It springs forth in the family dynamics of E.T.: the Extra-Terrestrial. And it evolves in Catch Me If You Can, as Frank Abagnale seeks refuge at the home of his mom’s second family. But Spielberg has never approached his own childhood with such straightforwardness as he does in his semi-autobiographical movie The Fabelmans, one of 2022’s best films so far.

The early word on Fabelmans made it look like Spielberg was out to join the trend of cinematic origin stories, this time focusing on his own personal origin. But his crowd-pleasing coming-of-age tale doesn’t fit neatly into that box, or any other. It’s a deeply personal narrative that isn’t wholly an autobiography, a greatest-hits replay of his career, or a cliché ode to moviemaking. It’s a vulnerable reach into his past, designed to heal a wound that seems to still be as tender as the day it opened decades ago, in spite of the bursts of comedy and the measured ruminations on display.

At times, The Fabelmans feels more like an idealized daydream of what could’ve happened to him, which often sands off the real-world edges and the pure anger that he must have felt as the son of divorced parents. This isn’t a confessional story. It grants the real-world figures a necessary grace, the kind people only find after coming out the other side of a lifetime of processing. And it features a brand of craftsmanship — from deliberate blocking to controlled, ingenious camera movements — that only occurs when you’re, well, Steven Spielberg. Above all else, it’s an empathetic message from the director to his mother.

Spielberg once again worked with Tony Kushner (his collaborator on West Side Story, Lincoln, and Munich) to develop the script. Their story begins with Burt (Paul Dano, in a tremendous performance) and Mitzi Fabelman (Michelle Williams, in a show-stopping one) taking their young son Sammy (Mateo Zoryon Francis-DeFord in early scenes, and Gabriel LaBelle in the teenage sequences) to the movies to see Cecil B. DeMille’s The Greatest Show on Earth. The images emanating from the screen dazzle and excite Sammy. And a fiery trainwreck, in which a car is impaled, blood erupts, and explosions fill the air, frightens him to the point where he obsessively reenacts the scene with his toy train set over and over.

To calm her son, Mitzi lets Sammy borrow his dad’s camera so he can film one of his toy-train crashes as a way to confront his fears. What Mitzi really does, however, is ignite a therapeutic love for movie-making, creating a lens that will become Sammy’s tool for trying to make sense of the world.

Sammy’s universe isn’t that complex. Burt is a brilliant, workaholic computer engineer and Mitzi is a free-spirited, classically trained pianist. Sammy has three sisters: Reggie (Julia Butters), Natalie (Keeley Karsten), and Lisa (Sophia Kopera). The New Jersey home where they all live is the perfect incubator for Sammy’s imagination. In their tight-knit Jewish community, they observe Jewish traditions, share their cultural humor, and are frequently visited by relatives. (This is an extremely Jewish movie.) They also hang out with Burt’s best friend and colleague Bennie Loewy (Seth Rogen), a man who appears totally supportive of the couple, but whose flaws could one day undo the family. In building out the imperative support system the Fabelmans enjoy in their neighborhood, Spielberg and Kushner’s assured script reveals the cracks that formed once the family left their familiar confines.

Burt is ambitious and selfish. First, he uproots his family and moves them to Arizona. Then he picks up sticks and heads toward Northern California. The further the family moves west, the further Sammy drifts away from his family and his roots — which brings him closer to his artistic passions. This early setup, which consumes the first hour of this 151-minute personal essay, runs at a slow pace, with a thesis that’s initially disorientating. How much of Spielberg is in Sammy? How much of what we’re seeing is fictionalized? Why wasn’t this just named The Spielbergs to save everyone the headache?

In one scene, Sammy and his fellow Eagle Scouts sneak into a movie. It’s telling that John Ford’s The Man Who Shot Liberty Valance is playing. The film, starring Jimmy Stewart and John Wayne, centers on a local senator recounting how his rise to power was fueled by a legend that he shot the titular famed outlaw, when he in fact did not. It’s a movie about mythmaking, reinvention, and the American West as an imperative setting for creating your own identity. The Fabelmans functions in a similar fashion: It isn’t a beat-for-beat origin story, it’s a chance for Spielberg to reshape the past without the heavy burden of his own name.

It also lets him re-approach the memory of his mother. In many ways, Sammy and Mitzi are exactly alike. Burt dismisses their artistic passions as hobbies. And Mitzi, in particular, has spent years setting aside her creative goals in favor of her husband’s burgeoning career. In the words of Mitzi’s Uncle Boris (Judd Hirsch, who absolutely crushes his one scene), she could’ve played anywhere for any symphony. Instead, she became a mother. Now, she and Sammy are looking for a way past Burt’s idiosyncrasies. But the once-tight bond shared by mother and son untethers when Sammy learns a disturbing secret about Mitzi (in a sequence elegantly assembled by Fabelmans editors Sarah Broshar and Michael Kahn) that causes him to temporarily lose his love of movie-making.

Make no mistake, however, The Fabelmans isn’t dour. A visual whimsy dances across the screen. Well-calibrated tracking shots and Janusz Kaminski’s dazzling cinematography set the creative bar. References to Spielberg’s biggest hits add a tip of the cap to his own career. The scenes of Sammy first filming simple shorts, then graduating to decent-sized, self-made war flicks, are inviting enough to make an entire audience want to take up amateur filmmaking. And at Sammy’s new Los Angeles high school, he falls for a Christian girl, Monica (Chloe East), whose attempts to convert Sammy provide riotous prayers doubling as euphemisms.

And yet the sense of betrayal a kid feels after a divorce propels this movie. It’s where LaBelle shines as the teenage Sammy. He doesn’t just imitate Spielberg’s speaking cadence and his body language. He rises above mere artifice by portraying Sammy as a dweeby, unathletic, and street-dumb kid first, and as Spielberg second. Nowhere is that more felt than when Sammy faces his anti-Semitic bullies with the power of the theatrical experience. This is a movie that seriously loves watching people watch movies: It adores the interior machinations, the hypnotic awe, and the revealed truths that happen when people see themselves on screen. LaBelle grounds these scenes with a sincerity that doesn’t come off as mawkish, but as euphoric and infectious.

And while LaBelle is wonderful on his own, he discovers another level when playing opposite an an incandescent Williams and a subtle, yet potent Dano. (The character work done here is among his best.) Williams, as the trapped housewife, turns in a freewheeling performance that would qualify as impossibly brilliant in its rawness and liveliness, if she didn’t just pull it off. Williams perfectly articulates the feeling of a woman on the verge of tearing herself apart, until she remembers that it isn’t her dreams or happiness that need to be shredded.

But Spielberg takes a refreshing tack by making sure not to paint either Burt or Mitzi as outright villains. They are complicated people with unignorable needs that they can’t fulfill while staying together. This is Sammy understanding the ambiguity of adulthood. This is Spielberg embracing it, so he can see his mother as a valid person in her own right.

By the end of the movie — which includes a too-hilarious to be described cameo by David Lynch as John Ford — Sammy skips down a studio lot knowing his troubles are behind him, and that his future lies just ahead. The Fabelmans is Spielberg exercising his vast filmmaking knowledge to compose a story where his entire heart is stapled across the screen. It’s beautiful, evocative, enthralling blockbuster filmmaking, perfectly tuned to remind viewers of the power that can reside within a movie.

The Fabelmans opens in wide theatrical release on Nov. 23.

A weekly roundup of the best things from Polygon