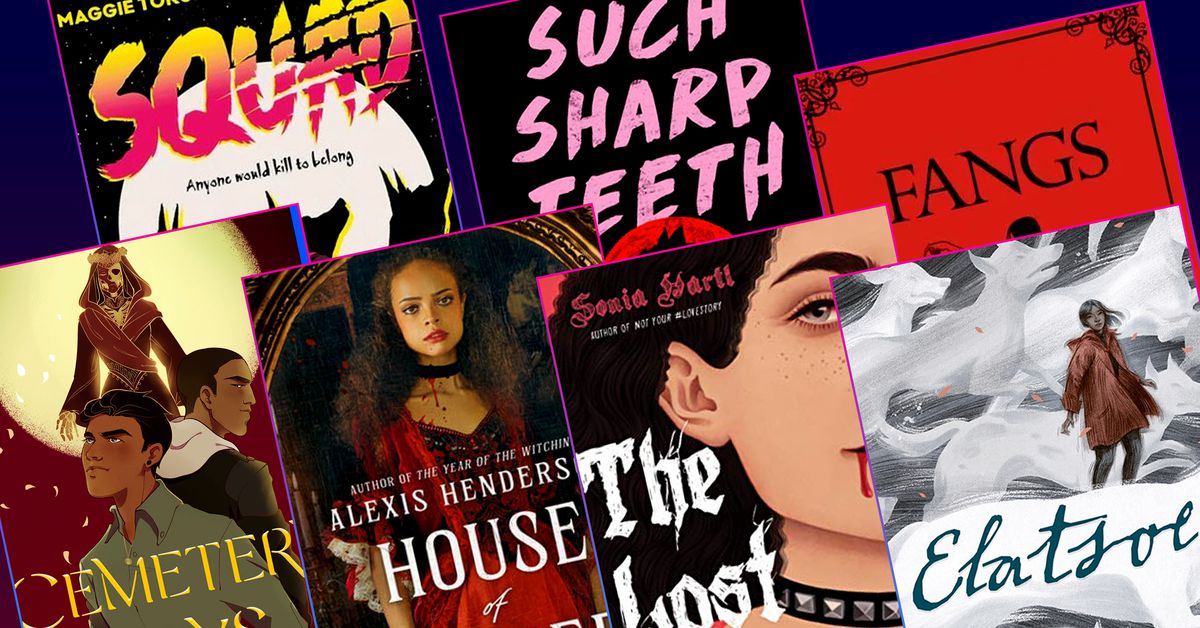 It’s hard to believe 10 years have passed since the cinematic masterpiece otherwise known as Breaking Dawn – Part 2 arrived in theaters. To help celebrate this momentous occasion, we’ve compiled a list of young adult and adult novels with a supernatural twist to read if you were (or still are) a Twilight fan.

The world Elatsoe lives in is not much different than our own. There’s still high school to navigate, homework to turn in on time, and pistachio ice cream. It just so happens there are also terrifying monsters and powerful magic users in this mirror-world. Elatsoe herself can communicate with the dead, a gift passed down through the generations of Lipan Apache ancestors that came before her. When her beloved cousin is brutally murdered, Elatsoe decides to put her unique skill set to use and, with the help of her best friend and her loyal ghost dog at her side, she soon discovers not all is as it seems in the picturesque town where her cousin’s body was discovered.

Darcie Little Badger has written a gorgeous and, at times, deeply unsettling story that readers of all ages will enjoy about the injustices that Indigenous people still face today and the importance of knowing where we come from. And, while it doesn’t feature a love triangle like in Twilight, Elatsoe features truly spectacular ace representation and some of the most terrifying vampires in YA literature.

What do you get when you cross Mean Girls with Teen Wolf? The answer is Maggie Tokuda-Hall and Lisa Sterle’s gorgeous and nostalgia-inducing YA graphic novel, Squad.

Set in the affluent suburbs of San Francisco, Squad introduces readers to Becca who, like most teenagers, wants nothing more than to find a group of friends she’ll fit in with. To Becca’s surprise she’s quickly adopted by a group of popular girls at school. It’s only under the light of a full moon that Becca learns the truth: her new friends are werewolves.

Squad is a compelling, neon-colored vigilante tale about the perils of peer pressure, love (both the platonic and romantic varieties), and how all of these things can bring friends together just as easily as it can tear them apart.

The Lost Girls by Sonia Hartl

If you’ve ever watched any of the Twilight movies and found yourself wishing Alice had more screen time (or you shipped Bella with Alice instead of with Edward), then The Lost Girls, Sonia Hartl’s sapphic vampire novel, might be the perfect book for you.

Immortality isn’t all it’s cracked up to be. When 16-year-old Holly Liddell is turned into a vampire by her boyfriend in 1987, the last thing she’s expecting is to be stuck with crimped hair for all eternity. Thirty-four years later, Holly meets Rose and Ida, two vampires who, like Holly, have been turned and left for un(dead) by her ex. Rose and Ida are hellbent on revenge, but things become complicated when Holly meets the new girl her ex has set his sights on.

The Lost Girls is an utterly charming take on John Tucker Must Die with a sapphic twist to it. It’s a wild ride from start to finish and an excellent reminder that girl gangs are not to be trifled with.

Despite what Twilight may have led you to believe, not all slow-burn supernatural romance takes place between a human and a vampire. Sometimes it’s between a human and the ghost of their school’s resident bad boy. This, as it just so happens, is exactly the case in Aiden Thomas’ enchanting and incredibly tender YA debut, Cemetery Boys.

Yadriel, a 16-year-old gay Latino boy, wants nothing more in the world than for his family to accept his gender. After Yadriel successfully performs a ritual to prove to his family he is a brujo, two things happen: He inadvertently unlocks his powers and accidentally summons the ghost of Julian Diaz, the school’s recently deceased troublemaker. In death, Julian is endearing and full of warmth in a way that seems at odds with the rumors of his troubled past. Determined to find out what really happened before he moves on, Julian convinces Yadriel to help him.

Needless to say, Cemetery Boys is an emotional rollercoaster of a book. Aiden Thomas pulls no punches as Yadriel is embraced at arm’s length (at least at first) by his family. The journey to acceptance and self-discovery is a bumpy one, but Yadriel has help along the way and learns that you don’t need permission from anyone to be yourself.

I dare you to find a slice-of-life graphic novel about a vampire and a werewolf falling in love that is as witty, charming, or downright fun as Fangs by Sarah Andersen.

Originally a webcomic, Fangs tells the story of Elsie, a 300-year-old vampire looking for love, and Jimmy, an utterly charming, flannel-wearing werewolf. Each page is its own self-contained comic strip that gives readers a glimpse into Elsie and Jimmy’s life together as their fondness for one another grows. They watch horror movies, go on dinner dates, and learn to navigate each other’s quirks (Jimmy hates the mailman, while Elsie struggles to take selfies and avoids the sun at the beach).

The combination of Andersen’s gorgeous, gothic illustrations and her signature, wry sense of humor highlights the trials and tribulations of modern-day relationships and makes Fangs a must-read if you’re a fan of supernatural romance.

Such Sharp Teeth by Rachel Harrison

If you were Team Jacob rather than Team Edward, Such Sharp Teeth by Rachel Harrison might be just the book for you. You’re guaranteed to have a good time reading any of Harrison’s books (check out The Return once you’re done with Such Sharp Teeth). Harrison is a master when it comes to making horror fun, and her feminist and body-positive take on werewolves is no exception.

Like many people, Rory Morris isn’t thrilled about the idea of moving back to the small town she grew up in, but that’s exactly what she does when her pregnant sister asks for her help. Rory abandons her dream job and ambitious social life, returning to the town she grew up in and the rumor mill she left behind. Things become more complicated when, after grabbing drinks with an old almost-flame, Rory hits a large, red-eyed animal with her car. Her investigation leads to a violent attack in the woods and, not long after, Rory develops an unusual craving for red meat, is suddenly super strong, and has a sudden aversion to silver.

With the next full moon coming up fast, Rory has to learn how to juggle her new predicament, supporting her sister as best she can, and a potential love interest all while trying to stop another attack from happening.

House of Hunger by Alexis Henderson

Unlike the vampires in Twilight, the ones in Alexis Henderson’s sexy, gothic new novel, House of Hunger, do not sparkle. Henderson has become an author to look out for when it comes to cosmic horror, dark fantasy, and things that go bump in the night. In House of Hunger, she deconstructs the hedonistic, blood-soaked vampire lore we’re all familiar with and flips it on its head.

Marion Shaw has longed to leave the city and the slums where she has lived for her entire life, so when the opportunity to work as a bloodmaid at the infamous House of Hunger arises, she jumps at the chance for a new start. Upon her arrival Marion discovers a lavish and debaucherous world in which the wealthy drink the blood of those in their service. At its center is the fearsome and seductive Countess Lisavet, and while Marion would do anything to please her new mistress, it’s difficult to ignore the fact that her fellow bloodmaids have begun to go missing during the night.

As alluring as it is unforgiving, this gory and gripping novel is not one to be missed.

The Undertaking of Hart and Mercy by Megan Bannen

If you’re a fan of romance novels and you somehow haven’t heard of The Undertaking of Hart and Mercy by Megan Bannen yet, then you should stop reading this and go get your hands on a copy right now.

The titular Hart is a marshal (think Timothy Olyphant in Justified), steadfast and serious, tasked with patrolling the magical land of Tanria. He’s also incredibly lonely. Desperate for a connection, Hart pens an anonymous letter that ends up in the hands of his nemesis: Mercy Birdsall. The last thing Hart is expecting is for Mercy to respond to his letter or, even worse, to romantic develop feelings for her.

Set in a world that features old gods, new gods, talking animals, the undead, and just about everything in between, it’s essential reading for anyone who swoons at the mere thought of a slow burn, epistolary, enemies-to-lovers plot.