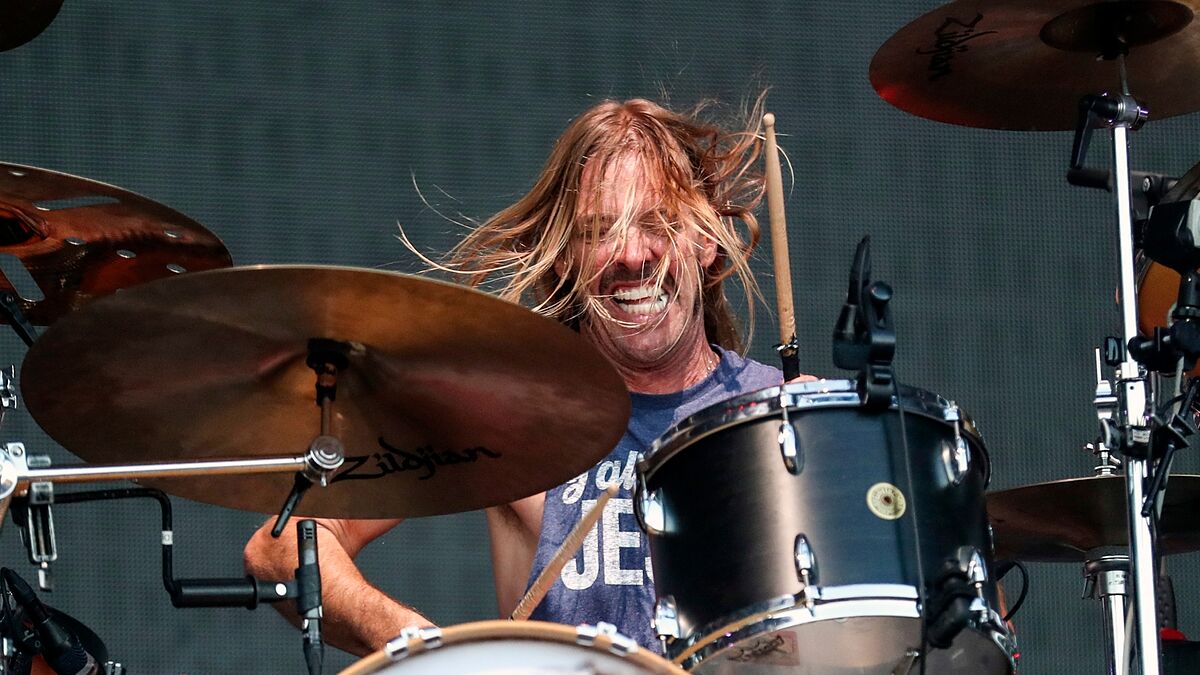 The entire world of music and entertainment is grieving after the news of Taylor Hawkins’ sudden passing broke during Friday evening. Reports confirmed he was found unresponsive at his hotel room in Bogota, Colombia, just hours before a live performance his band was booked for. The concert was set to be part of a three-day festival called ‘Estereo Picnic’, and the Foo Fighters were the main act on Day 1, but they obviously cancelled their performance due to this terrible news. As soon as the world started getting wind of what happened, numerous personalities from the entertainment world paid tribute to the rock legend through their social media accounts.

In this live blog, we will have some of the touching tributes towards the legendary Foo Fighters drummer, as well as news in the lead-up to his death.

Take a look at Dave Grohl introducing Taylor Hawkins in his final concert with the band before the tragedy occurred.

There really isn’t much more to say, we’ll just leave this tweet and hope Taylor is smiling from heaven.

Miley Cyrus breaks down in tears for Hawkins at Loollapalooza.

During Loollapalooza Brazil, Miley Cyrus broke down in tears as she told an ominous story of the first person she called when her emergency landing happened in Paraguay. It was Taylor Hawkins.

Black Pumas and fans pay tribute during the concert in Colombia.

What seemed like a promising night ended in tragedy for all Foo Fighters fans, the stage at the concert where they were supposed to play was filled with candles in Taylor Hawkins’ honor.

Comedian Conan O’Brien had a long-lasting relationship with Hawkins from their interactions on his talk shows. He paid tribute with the following tweet.

During a gig at the Royal Albert Hall in London, Liam Gallagher dedicated ‘Live Forever’ to the Foo Fighters drummer.

Back in 2001, Taylor Hawkins suffered a heroin overdose that left him comatose for a week. During that time, Dave Grohl composed a song for him. Here it is.

At Estereo Festival in Bogota, here are the moments in which the passing of the drummer was announced. There was a moment on stage when candles were lit in his memory.

In an ominous report from the Bogota police, there is a specific description of a report when Taylor Hawkins described the moment when the report was taken of Hawkins suffering chest pains.

Forensic report of Taylor Hawkins’ death is in.

The official forensic report of Taylor Hawkins’ body just came in, they found up to 10 different substances that include opiates and cannabis.

Foo Fighters drummer dies yesterday in Colombia. Hawkins was admired and beloved in the music community.

He had a net worth of Taylor Hawkins’ net worth was $40 to 57 million, largely due to his collaborations with Morissette, Foo Fighters and his side projects.

Her name is Emma, she’s from Paraguay and is one of Foo Fighters -Taylor Hawkins- biggest fans.

According to the tweet, Emma took her drums at the outside of the Sheraton hotel to be seen by Taylor Hawkins. The drummer took a picture with the 9-year-old girl two days before he died.

Friday night the official Instagram account of the Foo Fighters reported Hawkins’ death, without revealing further information about the causes of his death.

However, as the hours passed, details emerged about his death with the suspicion that it could have been a drug-related overdose.

According to a report published by the Daily Mail, Colombian police said the death of Hawkins, 50, may be drug-related.

Tributes for Taylor Hawkins in Bogota

Outside the hotel where Taylor Hawkins passed away, fans have been coming to pay their respects.

Mick Jagger, the lead vocalist in the Rolling Stones, has offered his condolences to the family and friends of Taylor Hawkins.

“So incredibly sad to hear of the passing of Taylor Hawkins. My thoughts are with his family and the band at this time,” read Jagger’s tweet.

One user on Twitter has posted footage from Taylor Hawkins’ last performance for Foo Fighters before his death, which came in Mexico City on March 15, 2022.

This video looks at the tragic death of Taylor Hawkins, who passed away at the age of 50.

Axl Rose, the lead vocalist and lyricist of the heavy metal band Guns N’ Roses, has paid tribute to Taylor Hawkins with a message on Twitter.

“Was always great to see him! Was looking forward to seeing him n’ everyone in Daytona.Truly saddened. My deepest condolences to his family, the Foo Fighters n’their fans.”

Taylor Hawkins cause of death

More details are beginning to emerge about Taylor Hawkins’ cause of death in Bogota, Colombia, with a drug-related overdose being suggested by the Metropolitan Police of Bogota.

Read more here about Taylor Hawkins’ cause of death.

During a video that he made during the height of the COVID-19 pandemic, when everyone was stuck inside their homes, Taylor Hawkins offered some tips to any aspiring drummers out there. Now, the video has a more emotional side to it.

Dave Grohl has never been afraid of showing his love for Taylor Hawkins, who joined Foo Fighters in 1997, three years after Grohl first created the band.

In a clip that has gone viral on social media, Grohl is seen discussing his love for Hawkins.

“We were, like, in love with each other. The first time we had a beer together, we’re like, we’re gonna be best friends for the rest of our lives. And it’s true. We still are,” he says in the clip.

Reading & Leeds Festival have paid homage to Taylor Hawkins by publishing a video of the Foo Fighters performing ‘Sunday Rain’, which features Hawkins singing whilst also playing the drums.

A nine-year-old girl in Paraguay was able to meet her hero Taylor Hawkins, just hours before the Foo Fighters drummer’s sad passing.

She took her drum set to his hotel in Asuncion in an attempt grab the attention of her idol, which ended up being successful.

Comedian Brad Williams is a good friend of the band and also offered his condolences.

Image of David Grohl with Kurt Cobain and Taylor Hawkins.

Dave Grohl has lost another band mate in his career. He lost Kurt Cobain in Nirvana and Hawkins today. It’s a difficult time for him as well.

The Back Keys’ drummer Patrick Carney posted some words for Hawkins as well.

During a performance in Monterrey, Mexico, Coldplay’s Chris Martin dedicated Everglow to Taylor Martin and said the following words.

This is the tribute from Nickleback, who also posted a portrait of Taylor Hawkins.

The Grateful Dead’s drummer Bill Kreutzmann had some beautiful words to say goodbye to Taylor Hawkins.

Another contemporary band that shared success alongsside the Foo Fighters was The Offspring, they also shared some words for Hawkins.

Actor John Stamos, who also recently lost his beloved friend Bob Sagetwas one of Taylor’s good friends. He shared the last text he got from the late drummer.

Alternative rock band The Smashing Pumpkins also posted an image and a tribute for Hawkins.

Sports site Barstool Sports paid tribute to Hawkins by posting a video of one of his live performances witht he Foo Fighters.

Rage Against the Machine’s Tom Morello reacts to Hawkins’ passing.

One of the most important rock bands in the world, Rage Against the Machine has Tom Morello as their lead guitarist. He was good friends with Hawkins and wrote a beautiful tweet accompanied by a picture of the two alongside Jane’s Addiction vocalist Perry Farrell.