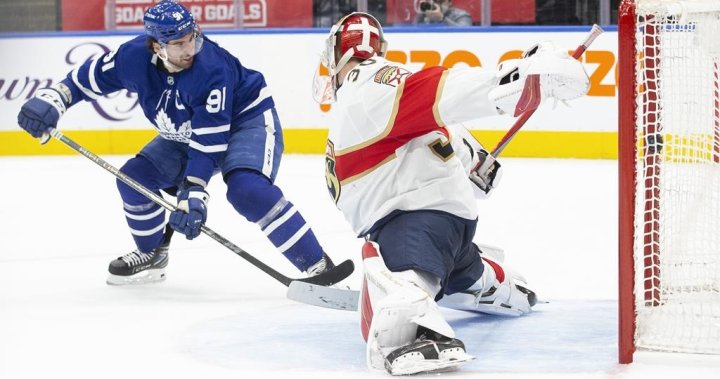 TORONTO – Mitch Marner set up three goals, including a pair of second-period power-play goals from John Tavares, to lift the Toronto Maple Leafs to a 5-2 win against the Florida Panthers on Sunday.

Marner also fired a pass into the slot to a streaking Iyla Mikheyev for Toronto’s fourth goal midway through the third period. Auston Matthews scored on a long drifter into the empty net with less than a second remaining.

Toronto defenceman Morgan Rielly checked in with a goal and two assists as the Maple Leafs (41-19-5) won for the second time in three starts since the NHL trade deadline last Monday.

The Eastern Conference-leading Panthers (44-15-6) lost for the first time in three starts with Claude Giroux in the lineup after the former Philadelphia Flyers captain was acquired last weekend.

The Panthers outshot the home side 31-23 but went 0 for 3 with the man advantage.

There were good vibrations in the building because an hour before puck drop, the Canadian men’s soccer team qualified for the World Cup for the first time since 1986 with a 4-0 win against Jamaica down the road at BMO Field.

The Maple Leafs needed only 11 seconds to give the 19,939 at Scotiabank Arena something more to cheer about. Rielly redirected a pass from T.J. Brodie for a 1-0 advantage.

The Panthers tied the game when Sam Bennett found defenceman Montour in the slot. He fired a high shot past Toronto goalie Mrazek midway through the first frame.

Florida snatched the lead early in the second period. Toronto’s William Nylander had the puck poked off his stick by Panthers forward Eetu Luostarinen, and it went to Lomberg from nearby Richmond Hill, Ont., for the go-ahead goal.

Tavares checked in with power-play goals 6:02 apart to regain the Maple Leafs’ advantage. Tavares’ first goal came on a rebound from a Marner shot.

Marner then found Tavares to the side of the net with a sweeping pass for a go-ahead goal. Tavares was good for his 21st and 22nd goals of the campaign.

Matthews had a partial breakaway before the Tavares goals but unwisely slipped a pass to Marner instead of shooting. Florida defenceman Radko Gudas lifted Marner’s stick to prevent a shot on Panthers’ backup goalie Knight.

The Maple Leafs meet another playoff-bound team next when they visit Boston to take on the Bruins on Tuesday.

This report by The Canadian Press was first published March 27, 2022.