Survivors emerge from rubble of Mariupol theater bombed by Russia 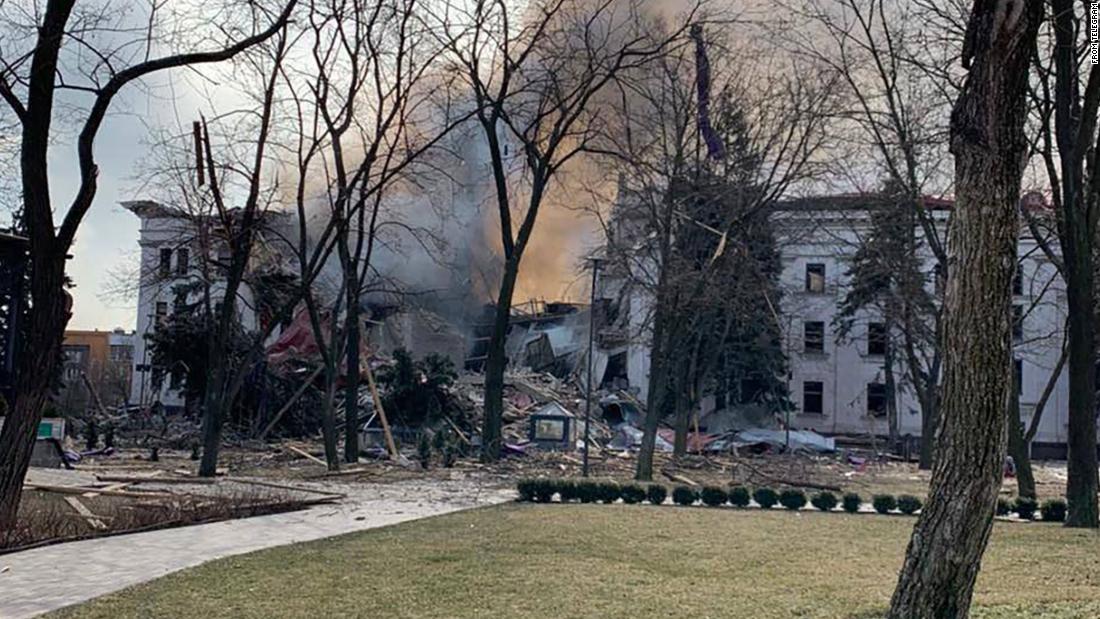 Hundreds of people were thought to have taken shelter in the theater amid the ongoing Russian siege of Mariupol. Hundreds of thousands of people are trapped in the coastal city and as many as 2,500 civilians have died in Mariupol, Ukrainian officials estimate.

“After an awful night of not knowing, we finally have good news from Mariupol on the morning of the 22nd day of the war. The bomb shelter [of the theatre] was able to hold. The rubble is beginning to be cleared. People are coming out alive,” the former Donetsk region head Sergiy Taruta wrote in a Facebook post Thursday.

He later told Ukrainian television that rescue efforts were being hindered by the complete breakdown of social services in the city and the dangers of further Russian attacks.

It was not yet clear whether all those who sheltered in the theater had survived. Taruta said on Thursday that 1,300 people were in the building when it was bombed and 130 have so far been rescued.

“People are doing everything themselves. My friends went to help, but due to constant shelling it was not safe. People are clearing away the rubble themselves. There is no rescue operation, because all the services that are supposed to rescue people, to treat them, to bury them, these services no longer exist,” Taruta told Ukrainian television.

Liudmyla Denisova, the Ukrainian Parliament’s commissioner for Human Rights, said earlier on Thursday that adults and children were coming out alive but the full extent of the impact remained unclear.

“In Mariupol, the release of civilians from the rubble of the drama theater has begun. The building withstood the impact of a high-powered air bomb and protected the lives of people hiding in the bomb shelter. Work is underway to unlock the basement,” Denisova said in a statement on Telegram.

However, she said there was “currently no information about the dead or wounded under the rubble of the theater,” and called the attack “an act of genocide and a terrible crime against humanity as defined by the Rome Statute of the International Criminal Court.”

After the bombing on Wednesday, Mariupol City Council shared an image of the building and said Russian forces had “purposefully and cynically destroyed the Drama Theater in the heart of Mariupol.”

CNN has geolocated the image and confirmed it is of the theater in the southeastern port city. The word “children” was spelled out on two sides of the theater before it was bombed, according to satellite images.

Ukraine’s Minister of Defense Oleskii Reznikov said on Thursday that the Russian who carried out the bombing was a “monster,” and stressed the presence of children in the building.

“You can see from the maps, from the drones that around this theater, big letters of ‘children’ were written so that the pilot of the plane which was throwing the bombs could see ‘children’, and still, in spite of that, this monster has bombed the theater,” Reznikov told the European Parliament via video link.

Russia has denied its forces hit the building and instead accused “militants of the nationalist ‘Azov’ battalion” of blowing up the theater. The Azov battalion started as a volunteer militia linked to far-right ideologies before it was incorporated into a Ukrainian National Guard unit in 2014.

Maxim Kach, a Mariupol city government official, said the building was for civilians, with only women and young children hiding within it and not military personnel, while an adviser to the government said it was the largest shelter in Mariupol.

Residents who escaped the city told CNN conditions were “unbearable” and “hell,” with constant shelling, reports of people being held captive in a hospital and residents left without water, electricity or heat.
Earlier this week a pregnant woman and her newborn baby died after a maternity hospital in Mariupol was bombed. CNN earlier reported that at least three people — including a child — died following the attack last week.
Previous attempts to evacuate Mariupol have failed, but 11,000 people managed to leave the city on Wednesday and flee to Zaporizhzhia, the city council said, and Ukriane’s deputy prime minister said 20,000 people left the besieged city on Tuesday.