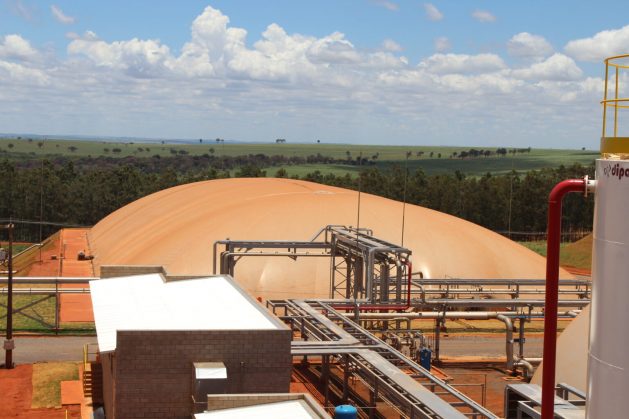 NARANDIBA, Brazil, Feb 23 (IPS) – Nothing is wasted from sugarcane, one can conclude from the biomethane production process at the Cocal plant, a Brazilian company that produces sugar, ethanol, electricity and other by-products from sugarcane agro-industrial waste.

Biomethane, equivalent to natural gas, which is methane of fossil origin, is the result of a long chain starting with the planting of sugarcane, originally intended for the production of sugar and spirits.

The sugarcane crop vastly expanded after Brazil decided to replace part of its gasoline with ethanol, in the face of rising oil prices in the 1970s.

Excess waste caused environmental disasters until companies were able to make use of it: bagasse as a source of thermal and electrical energy, for example. The vinasse and other wastes served as fertilizers, but they were imperfect because they contained organic material and consequently emitted polluting gases.

Cocal decided to produce biogas starting in 2021, subjecting vinasse and cachaza (sugarcane filter cake) to biodigestion in a plant built near its sugar mill and distillery, in the municipality of Narandiba, in the west of the state of São Paulo.

The decomposition of organic material inside the closed environment of biodigesters produces biogas, a mixture of gases. The extraction of these gases converts the waste into cleaner and more efficient fertilizers.

Biogas, on the other hand, can generate heat and electricity by burning it. But Cocal intends to refine most of it, i.e. to separate biomethane, a powerful fuel, from other gases, such as carbon dioxide and hydrogen sulfide, which have industrial uses.

The biomethane from Cocal will be distributed through a pipeline to three nearby cities – Narandiba, Pirapozinho and Presidente Prudente – which have a combined total of 264,000 inhabitants. The project is a pioneer in supplying local gas to an inland region without access to natural gas, which in Brazil comes from offshore hydrocarbon deposits and has limited distribution due to the scarcity of pipelines.

It may, therefore, inspire similar projects, especially in the interior of the state of São Paulo, which concentrates more than half of the sugar and ethanol produced in Brazil, in more than 150 plants.

That is why biogas, which can generate electricity or biomethane, earned the nickname “pre-salt caipira”, referring to the large hydrocarbon deposits discovered since 2006 under an offshore pre-salt layer in national waters and a Brazilian term that is used to refer to inhabitants of rural, remote areas in the country.

In addition, biogas is flexible and can be used for electricity generation or biomethane production, depending on market conditions. This reduces business risks, Alves argued.