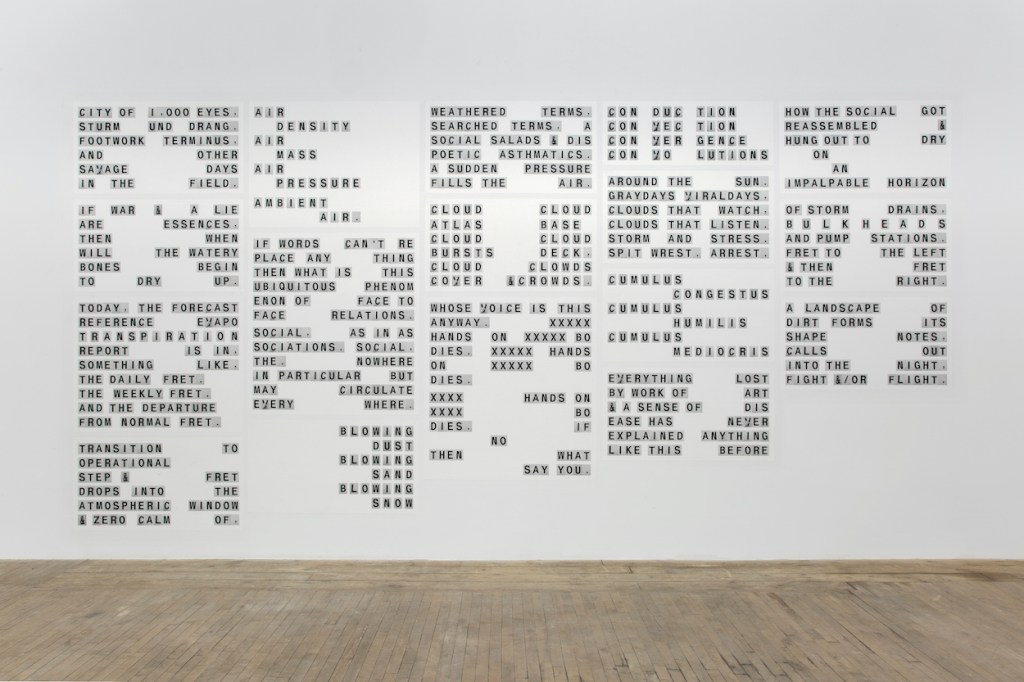 As a young MFA student at Yale in the late 1990s, Shannon Ebner set out on a pilgrimage to Nova Scotia to find her hero, Robert Frank. The Swiss artist’s black-and-white photobook The Americans (1958) became a defining social-critical document of postwar American life, and the English edition often includes an introduction by Jack Kerouac: “After seeing these pictures you end up finally not knowing anymore whether a jukebox is sadder than a coffin.” The tragedy of America often haunts Ebner’s pictures, as in her 2017 exhibition “Stray” at Galerie Eva Presenhuber in New York, where her images featured wry phrases she’d spelled out such as EX – PRESS / HOPE FOR THE ARTIST IN AMERICA and AMERICAN PHOTOGRAPHS. That uneasy presence lingers in “Fret,” her recent exhibition at Kaufmann Repetto in New York, which included thirteen melancholic black-and-white street photographs. In code of flag behavior (2022), a United States flag is visible behind a round pane of partly frosted glass that reflects bare trees in the distance, though the logic of these pictorial layers is subtly off kilter. A cryptic manipulation of perspective seems to be at play; it permeates many of the photographs, formally conveying how personal and national narratives are subject to editorial interventions and translations. In snow drift (2022), a door is marked with two sets of handprints—another discontinuity, as the delightfully childish signature typically found on frosty car windows reads more as a cry for help on the handle-less door.

Ebner’s pictures are also full of familiar streets and neighborhoods surrounding the gallery: a SoHo construction wall, a Lower East Side phone-screen-repair shop, the Chase Bank on the Bowery—the gray matter of the city, a place where layers of history and language flow and converge. See timbuk2 (2022), picturing a storefront that concurrently advertises a pop-up sample sale as well as retail space for rent, or days end (2022), where the artist photographs David Hammons’s 2014–21 work Day’s End, a monumental metal building frame in Hudson River Park that serves as a tribute to Gordon Matta-Clark’s 1975 architectural cuts out of the shed that once stood on the site, also called Day’s End. Ebner seems to have double-exposed a picture of a chain-link fence over the image of Hammons’s work. Within the larger context of her practice, these pictures seem to gesture to the alienation, discontent, and dissipation that have long been disavowed in romanticized and optimistic visions of American life. If such national mythologies were particularly powerful in Frank’s time, today it is clear that even the nostalgia for the “good old days” rings hollow.

For her 2019 exhibition at Altman Siegel in San Francisco, “Wet Words in a Hot Field,” Ebner constructed individual letters of the alphabet out of paper and pasted them onto a wall with water to photograph each separately; she then self-reflexively composed the prints of the letters into phrases borrowed from the instruction manuals of 35mm DSLR cameras. The same alphabet appeared in this exhibition in her visual-text poem fret (2022), which occupied a gigantic wall in the gallery with a meditation on loss and anxiety: HOW THE SOCIAL GOT / REASSEMBLED & / HUNG OUT TO DRY / ON / AN / IMPALPABLE HORIZON / OF STORM DRAINS, / BULKHEADS / AND PUMP STATIONS. Her methodology remained promising, but the form (which carried traces of that mutable category of “concrete poetry”) was affected by a rather exhausting degree of pathos. In the exhibition text, the artist cryptically wrote that she conceived of the wall poem as a “weather event that is facing off with a group of images that are forecasting the social world.” Her words, there and on the wall, reminded me of Lars von Trier’s 2011 film Melancholia, in which Earth, directly in the path of the titular planet’s orbital death-dance, faces total annihilation. Ebner again: CONDUCTION / CONVECTION / CONVERGENCE / CONVOLUTIONS / AROUND THE SUN [. . .] A LANDSCAPE OF / DIRT . . . CALLS OUT / INTO THE NIGHT, / FIGHT &/OR FLIGHT. This biblical forecast is one of collapse and breakdown—of the social, of the self. Reasons enough to fret, but if contemporary life has made clear the fragility of America (not only a myth, but also a disease), the rupture of its triumphant arc might ultimately be a form of salvation.