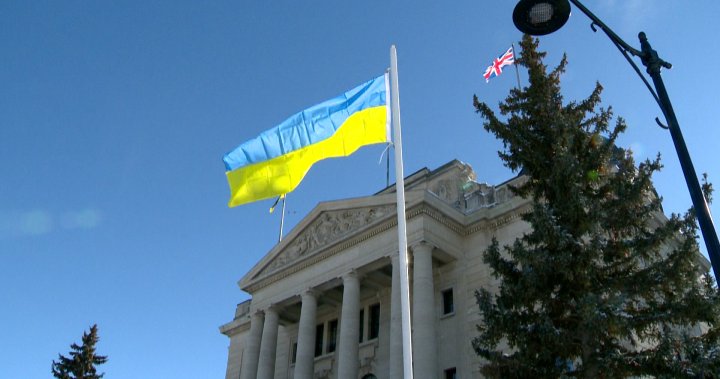 “It’s devastating. As anyone who considers himself a man it’s tough to know that you’re sitting back and hiding in a safe spot,” said Daniyil Lytvynenko, the owner of a new Ukrainian deli in Regina.

But Lytvynenko isn’t sitting back. Despite just hosting the grand opening for his Euro Deli Kiev days before Russia invaded his home country, he has shifted all his focus into sending food and clothing to Ukraine.

“We started buying socks, gloves, shirts, underwear, diapers for young kids and elders because right now the hospitals cannot function properly. They have to hide in bomb shelters. We started gathering foods, especially canned foods, because we don’t know how long this will last,” said Lytvynenko.

“We need to ensure that people will have food on their table for months to come if it will take that long to fight.”

And the support from Saskatchewan has come fast. Lytvynenko has already built up a second pile of supplies to be shipped to his home country.

1st shipment of Ukraine medical aid to arrive in Poland Thursday, WHO says

“I don’t want Ukrainians to believe they’re isolated. They’re not. People are witnessing the crimes every day. People are supporting them and our donations, people of Saskatchewan that I never met before bringing us stuff shows me that there is good in this world and we will win.”

Lytvynenko knows that supply donations are crucial in helping Ukraine but it doesn’t feel like enough to him.

“I don’t have military experience at all. I’ve never shot a gun in my life besides a paintball gun so I’m scared just as everyone else is and currently I’m in a state where I can see that the things that we are doing here are helping just as much as me being there,” said Lytvynenko.

“But that being said I lose sleep. I can’t sleep every day. I sleep for three hours a day max just because I feel guilty for hiding while my country is suffering.”

This is why many Ukrainians like Lytvynenko say they’d be willing to return home to fight for their country even without any military experience.

“I have a four-year-old at home, I have a work that pays my bills that I worked really hard to get. I have my mother and my sister here in Regina so I have a lot to lose if I go. But once again if you cannot respect yourself no one can ever respect you so that’s what makes me believe there is going to be a time if this doesn’t stop that no matter what I sacrifice it’s worth it because nothing is more important than your nation,” said Lytvynenko.

Vitalii Briukhanov, a Ukrainian man from Saskatoon has already decided to travel home to help defend his country.

“I have decided to go back to Ukraine and stand for my lands … This is what I have to do. That is what I’m feeling,” said Briukhanov.

Many of his store’s most popular products are Russian, yet Daniyil has stopped selling them despite trying to launch a new business.

“We removed them from the shelves. We are not willing to sell them to show the support or make people confused about what they’re doing. We stopped ordering everything from the Russian companies just because that is what pays for the war right now in Russia because everyone backed out from them,” said Lytvynenko.

But Lytvynenko who is Russian-Ukrainian has a message for anyone with Russian roots.

“Do not be ashamed to be a Russian. Russian is a nationality. Your passport and your president is not what dictates who you are.”