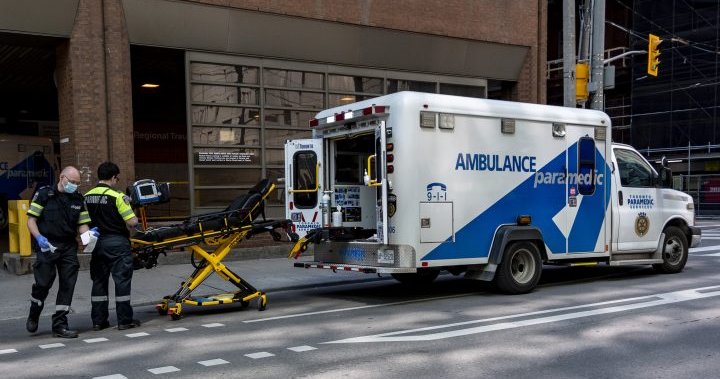 As Ontario’s hospitals stared down the barrel of another severe wave of COVID-19 in the fall of 2021, the Ford government was quietly instructing provincial health-care bureaucrats to tighten their belts.

In a letter obtained by Global News, the government’s then-health minister Christine Elliott instructed Ontario Health — the Crown agency responsible for Ontario’s health-care administration — to find “efficiencies and savings” in the system.

“As part of the Ontario government, agencies are expected to act in the best interests of Ontarians by being efficient, effective, and providing value for money for taxpayers,” Elliott’s letter said.

The letter then instructs Ontario Health to “pursue opportunities for innovative practices” and “identify and pursue efficiencies and savings including those due to COVID-19, as applicable.”

Less than two months later, Omicron was named a variant of concern by the World Health Organization, triggering new promises from Premier Doug Ford on combating the latest wave of COVID-19.

“Throughout this entire pandemic, we’ve never faced an enemy like Omicron given how quickly it spreads,” Ford said in a news release on Dec. 17, 2021.

Faced with massive demand, the government then began placing limits on who qualified for PCR testing, resulting in significant savings for the province — in line with the directive given to Ontario Health.

“I couldn’t believe it,” said France Gelinas, the NDP’s health critic. “We had a premier who stood up in the (legislature) every day and said, ‘We will spare no expense,’ and then you see this mandate letter telling them basically don’t spend any money you don’t need to spend.”

In a sit-down interview with Global News, the CEO of Ontario Health said the bureaucracy saved money after the government shifted away from some pandemic policies, particularly “the amount of money that’s spent on testing.”

“The government has shifted the focus on rapid tests as opposed to PCR tests…. Ontario Health runs the PCR network,” Anderson said.

“Those would be savings that would go back to the government because we’re not using that part of the infrastructure anymore.”

In another instance, Anderson provided the example of multiple provincewide surgical referral systems that were funded by the government during the pandemic to cut down surgical wait times.

Anderson told Global News Ontario Health’s objective is to find “efficiency for patient care” and revealed that since its creation in 2019, the agency has “given back over a half-a-billion dollars in savings.”

“How at the end of the day, the government uses the funds that have been identified, our hope and belief would be to re-invest it into other parts of the health-care system,” Anderson said.

A spokesperson for the Ministry of Health told Global News integration has “redirected nearly $400 million every year into frontline patient care that the previous government wasted on duplicative admonition and bureaucracy.”

“Ontario Health has a mandate to ensure this funding is used in a way that maximizes its benefit to patient care, including by finding efficiencies in a large, complex system where appropriate,” the spokesperson said.

The agency’s 2022-23 annual business plan includes examples of other efficiencies the agency planned to pursue.

“Rationalize and consolidate digital assets and services as contracts end or opportunities arise to optimize services, increase efficiency and ensure value for money,” one line of Ontario Health’s 2022-23 plan says.

Another explains the agency will seek “further integrations” in its quest for efficiencies.

It also says the agency will “evaluate digital and virtual solutions, programs and services to identify opportunities, innovative models and promising practices for improvement, scale and spread.”

The order for savings and efficiencies comes as the Financial Accountability Office of Ontario found the Ford government spent $1.8 billion less than it planned to on health care last year.

The Ford government disputes that figure, saying it is a point in time that does not tell the whole story.

However, repeatedly pressed by Global News at a press briefing, Minister of Finance Peter Bethlenfalvy refused to say every cent budgeted for health care had been spent in the past year.

And, with a staffing crisis continuing to unfold in the province’s hospitals, the opposition has called foul on the order to cut costs.

“We’re in the thick of a pandemic and they’re saying find efficiency, find savings,” Gelinas said. “That was a low priority in the pandemic when we were still counting the dead in long-term care.”

Ontario Health was created by the Ford government in 2019 as a Crown super-agency designed to consolidate various public health agencies including Cancer Care Ontario, Health Quality Ontario and 13 Local Health Integration Networks around the province.