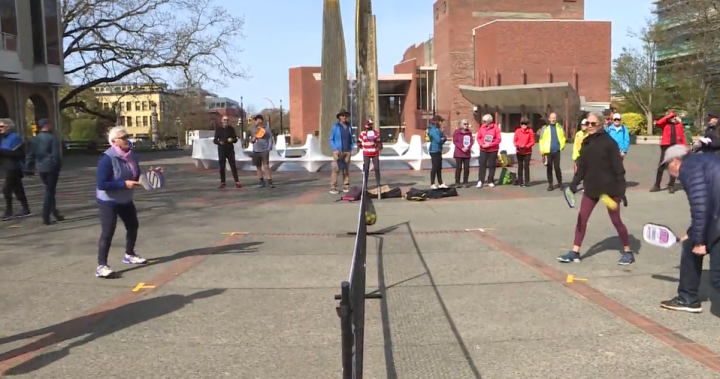 Frustrated Victoria pickleball players took their message to the city on Thursday, after the city moved to shut the game out of a popular park in the James Bay neighbourhood.

Members of several local pickleball groups set up an impromptu court in front of city hall, where they batted balls back and forth in a light-hearted protest.

“We just decided we would step out here and show council and the mayor what pickleball is all about,” said local pickleball organizer Janine Douglas.

“The message we’re trying to send is this is a sport that is just growing phenomenally … There’s a lot of seniors, but there’s also a lot of young people too because it’s a sport you can play with families.”

The city removed pickleball lines from tennis courts in Todd Park on March 31, after it received noise complaints from neighbours. Tennis players have also complained about lack of access to the courts due to the popularity of pickleball.

2:20
Pickleball players cry foul over being kicked out of Todd Park in Victoria

Pickleball players cry foul over being kicked out of Todd Park in Victoria – Mar 22, 2022

Pickleball is a net and racket/paddle sport that uses a hard, polymer ball.

A paddle striking the ball generates a sound of about 60 decibels, well within Victoria’s noise bylaws. However the Todd Park courts are about 17 metres from nearby homes, while more recent industry standards have established a minimum distance of 50 metres.

“We were ready to adapt, to put up acoustic curtains, to have a different quieter ball, to have shorter hours — we were not consulted by city,” player Luke Penseney said.

In a statement, the City of Victoria said there are currently four parks available to accommodate pickleball players: Central Park, Oaklands, Barnard Park and Franklin Green.

“The city acknowledges the high demand for pickleball in the region and the health benefits for those who play the sport,” it said.

“The city has had and continues to have discussions with pickleball permit holders about this transition.”

It said six of seven pickleball groups with permits have been moved to Central Park, where it said courts are further from homes.

2:45
Pickleball 101: A lesson in the popular sport in this edition of Out & About

It said it has also planned six dedicated pickleball courts for an upgrade to Topaz Park, with construction expected to begin in 2023.

Robbie Christie with the James Bay Pickleball Club said the Central Park option, about 3.5 kilometres and a 45 minute walk away was not practical for many James Bay seniors who play.

“We can’t walk to the courts anymore. That was part of the enjoyment of pickleball — walk to the park, see the neighbourhood, play with people that you enjoy playing with,” she said.

The Topaz upgrade, she added, likely wouldn’t be ready for players for at least two years.

“We’re getting into our 80s, so will we still be here when they’re finished? Now we’ve got nowhere to go,” she said.

The pickleballs, it turns out, may not be left waiting for a compromise.

Towards the end of Thursday’s demonstration, players say they got a call from city staff setting up a meeting for Tuesday to discuss “immediate solutions.”

“Thank you for hearing us,” Penseney said.

“Now we will wait to see the reality of the proposed solution.”

— with files from Elizabeth McSheffrey