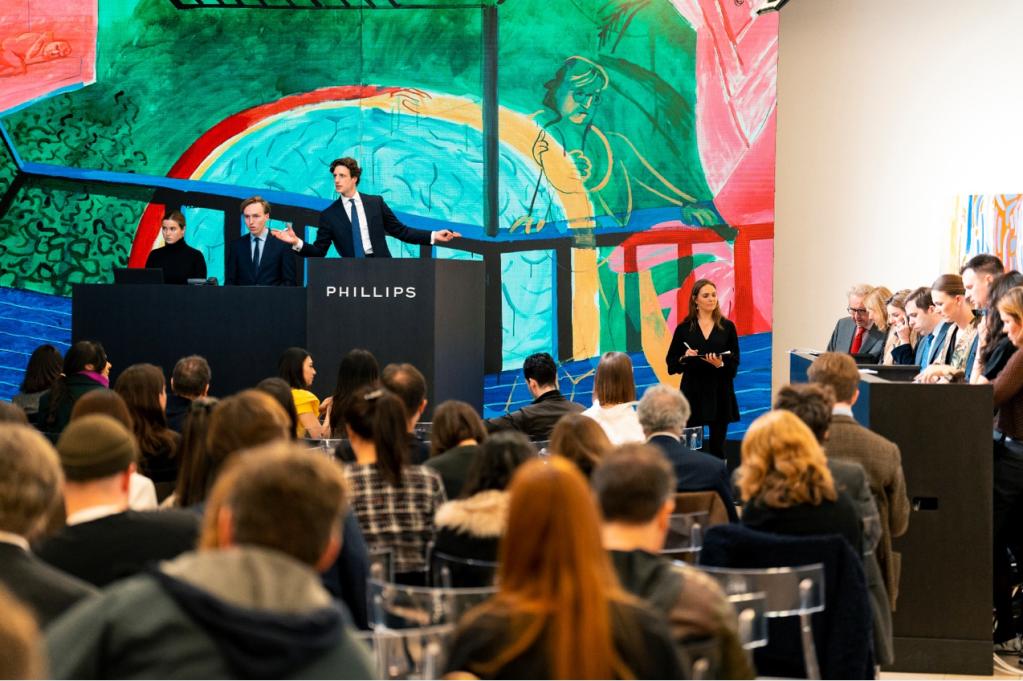 Amid the somber backdrop of an escalating war in Ukraine, Phillips followed its competitors Sotheby’s and Christie’s, holding an evening sale dedicated to modern and contemporary art at its London headquarters that brought in £29.9 million ($40 million) on Thursday. The total surpassed the sum made during last year’s equivalent sale held in April, which brought in £24.8 million with premium ($34.2 million), across 30 lots.

At this sale, 36 out of a total 41 lots sold, yielding a solid 95 percent sell-through rate. Eight works, including ones by David Hockney, Günther Förg, and Henry Moore, were secured with third-party backing before being offered in the sale. After four lots were withdrawn prior to the sale, the auction was expected to fetch an estimated hammer price of £24.7 million–£36 million ($33 million–$48 million). The sale’s final sum of $40 million (£29.9 million) includes premium.

Phillips auctioneer Henry Highly took up the gavel on Thursday to lead the sale. The atmosphere in the room appeared notably downcast as reports of economic sanctions targeting key Russian financial institutions and high-net-worth Putin allies, after Russia’s invasion of Ukraine last week, continued to escalate.

On the heels of an announcement earlier this week of its plans to sell a $70 million Basquiat painting in May that would mark a price milestone for the house, Phillips is now being eyed over its status as a Russian-owned company as the armed conflict worsens abroad. Amid some scrutiny over the house’s ownership by the Moscow-based luxury behemoth Mercury Group, the house pledged to donate the proceeds made from buyer’s premium and vendor’s commission from Thursday’s sale to a Ukrainian relief fund. The sale raised a total of £5.8 million ($7.7 million) for the cause.

“Of course no financial donation is going to rectify this terrible situation,” a Phillips spokesperson told ARTnews in a statement. “But we feel we are taking the lead in the art market in making a significant donation in expressing our solidarity with the people of Ukraine in a meaningful and practical way.”

A 2015 canvas by Nicolas Party titled Houses, which features a cluster of five multi-colored structures of various heights, attracted bidding from London. It ultimately went to a bidder on the phone with Phillips U.K. contemporary art specialist Charlotte Gibbs, selling for a final price of £1.5 million ($1.9 million).

A work by British painter Jadé Fadojutimi, whose work has seen a rapid rise in the auction circuit over the past year, saw attention from bidders in Asia. Her 2020 canvas A Cropped Perspective of This Whirlwind Effect, an abstraction in a green palette, saw bidding between Phillips head of client advisory Kevie Yang, based in New York, and Kathy Lin, a London-based client liaison for the Asia Pacific region. It sold for £627,500 ($854,000) with premium, four times the £150,000 estimate ($204,000), to Lin’s client.

In her auction debut, a work by Los Angeles–based artist Lauren Quin saw three bidders from Japan, Hong Kong, and mainland China compete for the work. As the sale’s opening lot, the abstract composition, titled Air Sickness (2021), spurred momentum early on in the sale when it sold for a final price of £441,000 ($600,000), more than ten times the estimate of £30,000 ($40,000) low estimate. But that speed proved difficult to maintain as the sale progressed.