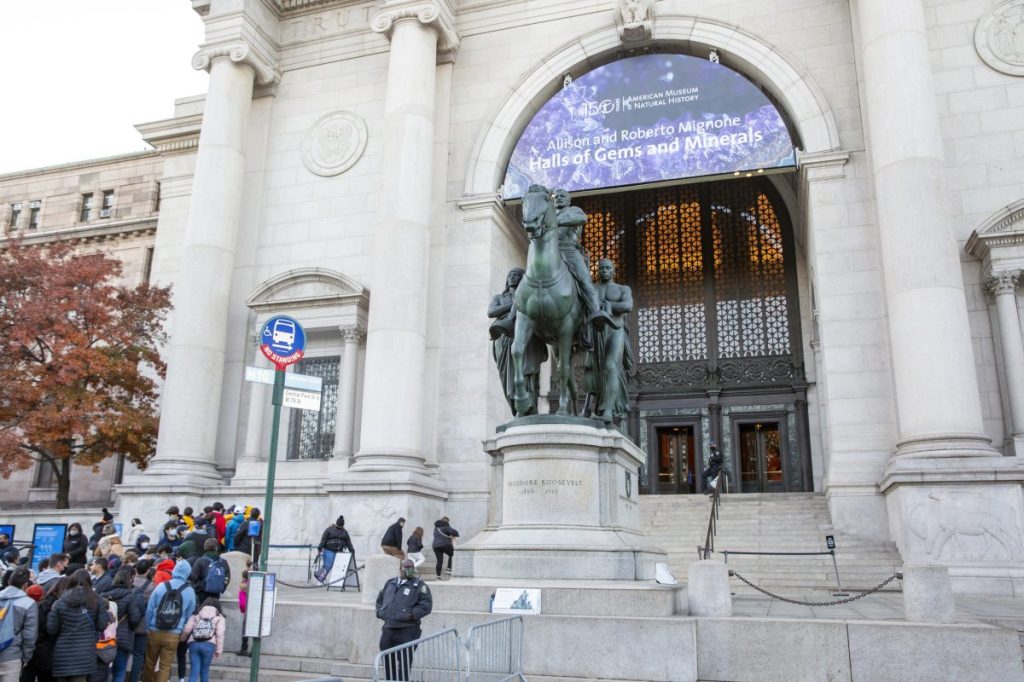 More than 140 artists and professors have signed a petition calling on New York City officials to stop the relocation of a contested statue of Theodore Roosevelt that long resided at the American Museum of Natural History, claiming that its new location in North Dakota would put it on land that was seized from Indigenous peoples.

The bronze statue depicts Roosevelt on horseback, flanked by Black and Indigenous figures that are positioned beneath him. Activist groups have deemed the statue racist and have been seeking its removal for years. Following protests for racial equity last year following the murder of George Floyd, the museum and city officials announced plans to remove the monument in January 2022.

The city of New York is set to relocate the statue to the Theodore Roosevelt Presidential Library in Medora, North Dakota, where it will be on long-term loan. Detractors of the move to do so argue that Indigenous communities should have been consulted first.

A representative for the MHA Nation (Mandan, Hidatsa, and Arikara) in North Dakota told Hyperallergic, which first published the petition, that tribal leaders in the region were not asked about the plan and that the group would be “offended” if the statue was installed on its ancestral lands.

The library commemorating the U.S. president is estimated to cost $150 million, with $50 million of that sum coming from the state of North Dakota. It is set to be finished in 2025. Plans for the presidential archive will see the building erected on a former ranch at the Theodore Roosevelt National Park.

Portions of the federally owned land where the park is located were seized from the MHA Nation in the mid-19th century. Subsequent executive orders in the decades afterward saw even more land taken from Indigenous communities.

The petition calls for the city to consider melting down and repurposing the bronze materials from the monument instead of relocating it. The document also pointed to Roosevelt’s track record of policies that stripped Indigenous tribes of land ownership rights, as well as public speeches in which he said he supported genocide of Indigenous peoples throughout the U.S. “No one can ignore Roosevelt’s own, well-documented contempt for Indigenous people—a sentiment not at odds with his zeal for environmental conservation,” the petition reads.

Among the petition’s signatories are artists Dread Scott, Hans Haacke, and Teresita Fernández, who serves on the mayoral commission on City Art, Monuments and Markers that reviewed proposals for the statues’ relocation in 2017. Professors across Yale, Columbia, New York University, and Harvard also signed the letter.

Calling the decision to move the statue to a site “so culturally important to the MHA Nation” a “mistake,” the petition describes the plan as “either an act of breathtaking insensitivity or of metropolitan arrogance.”

In a statement from November, a representative for the Theodore Roosevelt Presidential Library said the library’s board sees the statue as “problematic in its composition,” adding that “its current location denies passersby consent and context.” The library plans to consider a display that allows the statue to “serve as an important tool to study the nation’s past.”

In a separate statement, the group Decolonize This Place condemned the transfer of the statue to the North Dakota badlands, saying that at its new site, it “will sit on stolen land.” Another petition addressed to the New York City Public Design Commission started by North Dakota Human Rights Coalition organizer Melanie Moniz last year has drawn more than 700 signatures. “We are not a dumping ground of the colonialist tributes that other states are no longer willing to house,” that petition to the commission reads.