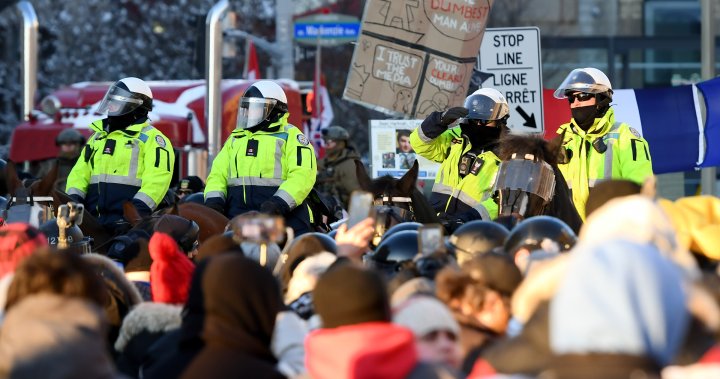 A massive police operation to clear demonstrators out of Ottawa’s downtown core continued through the bitterly cold night as the protest against the federal government and COVID-19 public health measures entered its fourth week.

More than 100 protesters, including four key organizers, have been arrested and at least 21 vehicles in the so-called “Freedom Convoy” were towed Friday as hundreds of officers – some of them on horseback – fanned out across the area to take back the streets.

The well coordinated police action began peacefully Friday morning but as the day wore on tensions escalated with the Ottawa Police Service accusing protesters of assaulting officers, trying to take their weapons, and in one case throwing a bicycle at a police horse. Some protesters claimed they were assaulted by officers.

Ottawa police interim chief Steve Bell told a Friday evening news conference that clearing the area would take time, but the operation was “deliberate and methodical” and police were in control on the ground.

1:42
Dozens arrested as police clearing the streets of Ottawa

Dozens arrested as police clearing the streets of Ottawa

He said no serious injuries had been reported, and those arrested had been charged with various offences including mischief, adding that police were still urging demonstrators to leave peacefully.

Meanwhile, inside the House of Commons today MPs will resume debate on the use of the Emergencies Act to respond to the illegal blockades. The debate was begun on Thursday but Government House leader Mark Holland said in a Twitter post that House leaders from all parties agreed to to cancel Friday’s session on the advice of parliamentary security.

Holland said MPs will vote early next week on the Emergencies Act motion.