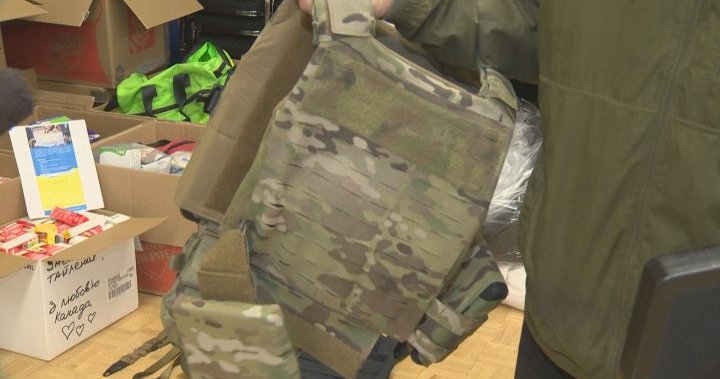 A group of Ukrainian Canadians are doing their part to help Ukraine during the ongoing Russian invasion.

The group, named Kelowna Stands With Ukraine on Facebook, has gathered military, medical and humanitarian supplies that they will directly send to their homeland.

Denys Storozhuk, one of the organizers, who immigrated from Kyiv over 20 years ago, says the local support they have received has been surprising.

“It’s overwhelming. I’m surprised by just the sheer amount of it,” said Storozhuk.

So far, the group has purchased and sent 32 sets of body armour to the Ukrainian military.

Kostiantyn Siryi , a 25-year-old born in Ukraine, says he’s been in touch with some of his old friends in Ukraine.

He says they’re part of a special forces unit on the front lines. They sent him a short video, thanking Kelowna people for their support.

“We want to thank Kelowna for sending help to our warriors — body armour, first aid kits and other supplies that are useful to us,” said the masked unnamed Ukrainian solder.

The group’s home base is at the Ukrainian Catholic Church in Kelowna.

The pastor is encouraging everyone in the community to participate in humanitarian efforts locally.

“Please remember together in spirit we are united. Please make donations to organizations. Our church, we accept donations, items and medical supplies which are truly needed. I talked to my sister, my sister in law, they do not have enough bandages,” said Rev. Pavlo Myts, Kelowna’s Ukrainian Catholic Church’s pastor.

The group has a rally planned for Sunday, at the large pedestrian overpass over Harvey Avenue, from 2 to 4 p.m.