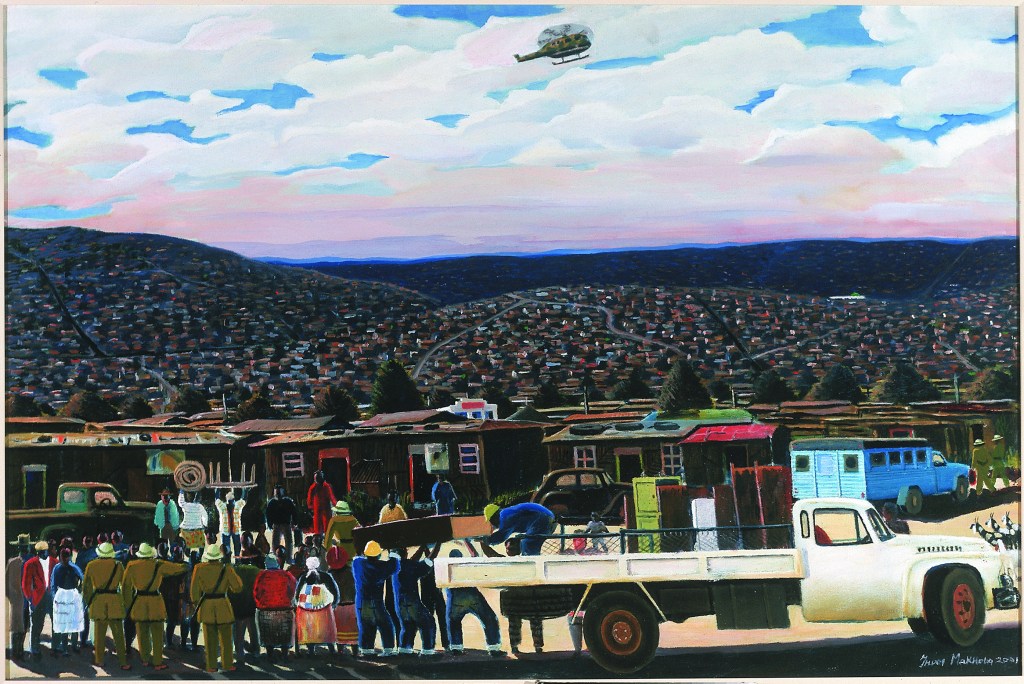 Curated by South African arts journalist Sean O’Toole, “Congress: The Social Body in Three Figurative Painters” explored Black subjectivity through the themes of kinship and mutuality. The exhibition at the Norval Foundation in Cape Town brought together works by three artists from three generations—George Pemba (1912–2001), Trevor Makhoba (1956–2003), and Sthembiso Sibisi (1976–2006)—with a focus on group portraits they created over a period of more than five decades (1950–2005). The images capture couples and groups as they walk (Sibisi, Going Home [Chicken Couple], 2005), work (Pemba, Harvesters, 1976), worship (Sibisi, Ocean Baptism, 2005), celebrate (Sibisi, Imfene Stokvel, 2005), and even die (Makhoba, They Were Deeply in Love, 2002).

The title “Congress” suggested a coming together for some shared purpose; the exhibition emphasized scenes of social, political, and spiritual gatherings, which the curator described as “images of communion, disorder and transcendence.” These gatherings take place against the backdrop of South Africa’s spatial politics, particularly the segregationist system of apartheid and the processes of urbanization that saw many Black people moving from the countryside to cities in search of work. Several paintings detail forced removals of Black people from areas declared as “whites only” by the government (Makhoba, Removals, Cato Manor, 2001), housing insecurity (Pemba, Homeless, 1973), and precarious working conditions (Makhoba, Gumboot Dance in the Old Mine, 2002). These are presented alongside pictures of leisure, rest, and play: Pemba’s The Audience (1960) shows a young couple at a movie theater completely engrossed in each other and Makhoba’s Amagendi Kids (Cato Manor), 2001, depicts children playing the coordination game known as diketo, which involves drawing a circle on the ground and shifting small stones in and out of the circle while throwing another in the air and catching it before it hits the ground.

Drawing its own kind of circle across time, “Congress” was organized at a critical moment in the history of realism, now that figuration is under scrutiny due to its massive proliferation, particularly in the form of works depicting Black people and Black life. By presenting early works by artists proficient in that genre, the exhibition anchored contemporary figuration in an art historical lineage. In South Africa specifically, the current burgeoning of representational art-making comes after a hiatus during which many young artists—including Igshaan Adams, Nandipha Mntambo, and Nicholas Hlobo—worked in abstraction that frequently engaged materiality.

The exhibition drew interesting parallels between the three painters and their respective social contexts. Pemba’s sketches, notations, and studies reveal how he moved from watercolors to oil painting on the advice of his mentor Gerard Sekoto, a fellow artist who nudged him away from rendering idealized pastoral versions of his people and toward reflecting the world as he experienced it. Sibisi made a similar shift in his career: though he started working in printmaking, other Black painters (including Pemba) inspired him to transition to oil painting. Like his contemporaries, he moved away from idyllic and sentimental depictions of Black life to begin painting what he observed around him—as seen in Taxi Group (2003), a vivid and dramatic canvas illustrating commuters in a vehicle, most of whom look with annoyance at a fellow passenger carrying a live chicken on his lap. Later, as he sought to become a spiritual healer, Sibisi increasingly incorporated spiritual themes into his work; one of his last series of paintings focuses on ocean baptisms. While Sibisi and especially Pemba arrived at a subtle, earthy palette with the realistic use of color, Makhoba favored evocative, harsh, and dark palettes. This may result from his circumstances—he sold his work on the Durban beachfront, where it was regularly exposed to sunlight. Often considered a moralist painter, Makhoba was deeply invested in Christian values and a personal cosmology. More than that of Pemba and Sibisi, his work is didactic, warning youth about the scourges of HIV/AIDS, gender-based violence, and alcoholism.

Although this exhibition could be read as a document of Black life in a very specific time frame, a purely historical reading would miss the artists’ nuanced engagement with surrealist aesthetics: Pemba, Makhoba, and Sibisi often experimented with fantasy and distortion in trying both to make sense of the conditions of life under apartheid and to stretch the limits of what was possible. Just as the parameters of the artists’ work remained open, the parameters of the exhibition were provisional, suggesting ways in which group portraits might contribute to increased understanding of communal life in South Africa.