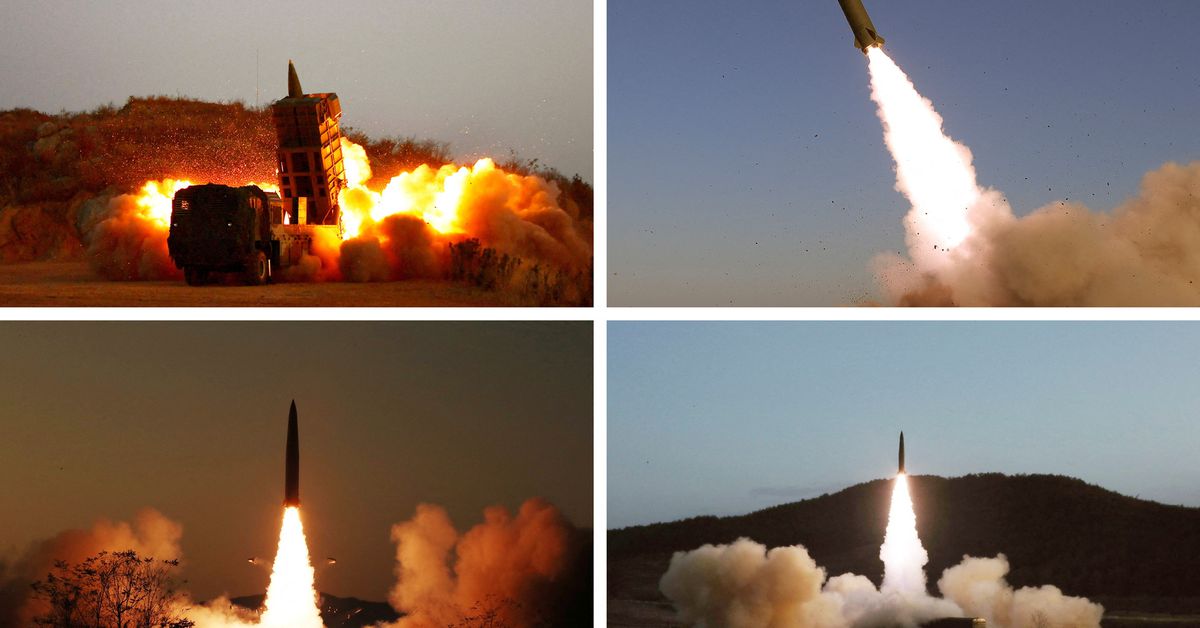 SEOUL, Nov 7 (Reuters) – North Korea said on Monday that its recent missile launches were simulated strikes on South Korea and the United States as the two countries held a “dangerous war drill”, while the South said it had recovered parts of a North Korean missile near its coast.

Last week, North Korea test-fired multiple missiles, including a possible failed intercontinental ballistic missile (ICBM), and hundreds of artillery shells into the sea, as South Korea and the United States carried out six-day air drills that ended on Saturday.

The North’s military said the “Vigilant Storm” exercises were an “open provocation aimed at intentionally escalating the tension” and “a dangerous war drill of very high aggressive nature”.

The North’s army said it had conducted activities simulating attacks on air bases and aircraft, as well as a major South Korean city, to “smash the enemies’ persistent war hysteria”

The flurry of missile launches included the most ever in a single day, and come amid a record year of missile testing by the nuclear-armed North Korea.

South Korean and U.S. officials have also said that Pyongyang has made technical preparations to test a nuclear device, the first time it will have done so since 2017.

Senior diplomats from the United States, Japan, and South Korea spoke by phone on Sunday and condemned the recent tests, including the “reckless” launch of a missile that landed off South Korea’s coast last week, according to a U.S. State Department statement.

The South Korean Navy rescue vessel used an underwater probe to recover the parts, which are being analysed, the official said.

South Korean officials called that claim “untrue” and said they had tracked no missiles near there.

Analysts said some of the photos released by North Korean state media seemed to be recycled from launches earlier in the year.

The operations also included a launch of two “tactical ballistic missiles loaded with dispersion warheads,” a test of a “special functional warhead paralysing the operation command system of the enemy,” and an “all-out combat sortie” involving 500 fighter jets, according to a statement carried by the official KCNA news agency.

Five hundred fighters would represents almost every dedicated combat aircraft in the North’s inventory, which seems unlikely given many are 40-80 year old airframes and not all are serviceable or kept in the active fleet, said Joseph Dempsey, a defence researcher at the International Institute for Strategic Studies.

The General Staff of the North’s Korean People’s Army (KPA) accused Seoul and Washington of eliciting a “more unstable confrontation,” and vowed to counter their drills with “sustained, resolute and overwhelming practical military measures.”

“The more persistently the enemies’ provocative military moves continue, the more thoroughly and mercilessly the KPA will counter them,” it said in the statement.

The photos released by state media appeared to show a previously unreported new type or variant of ICBM, analysts said.

“It’s not explicit in their statement, but the design doesn’t correspond to one we’ve seen before,” said Ankit Panda, a missile expert at the Carnegie Endowment for International Peace.

He said the launch shown may have been a developmental platform for evaluating missile subsystems, including possibly a vehicle for multiple independently targetable reentry vehicles (MIRVs), which allow a single missile to drop nuclear warheads on different targets.

“This is definitely an ICBM-size missile,” Panda said.

George William Herbert, an adjunct professor at the Center for Nonproliferation Studies and a missile consultant said the images showed what appeared to be a new nosecone on North Korea’s Hwasong-15 ICBM, which was first tested in 2017.

The nosecone has a different shape, and appears larger than necessary for the 200- to 300-kiloton nuclear device shown in state media and apparently tested in 2017, he said.

Herbert said the shape is more suited for a single large warhead than multiple smaller warheads such as a MIRV.

Kim has called for the development of both larger nuclear warheads, as well as smaller ones, which could be used in MIRVs or for tactical weapons.