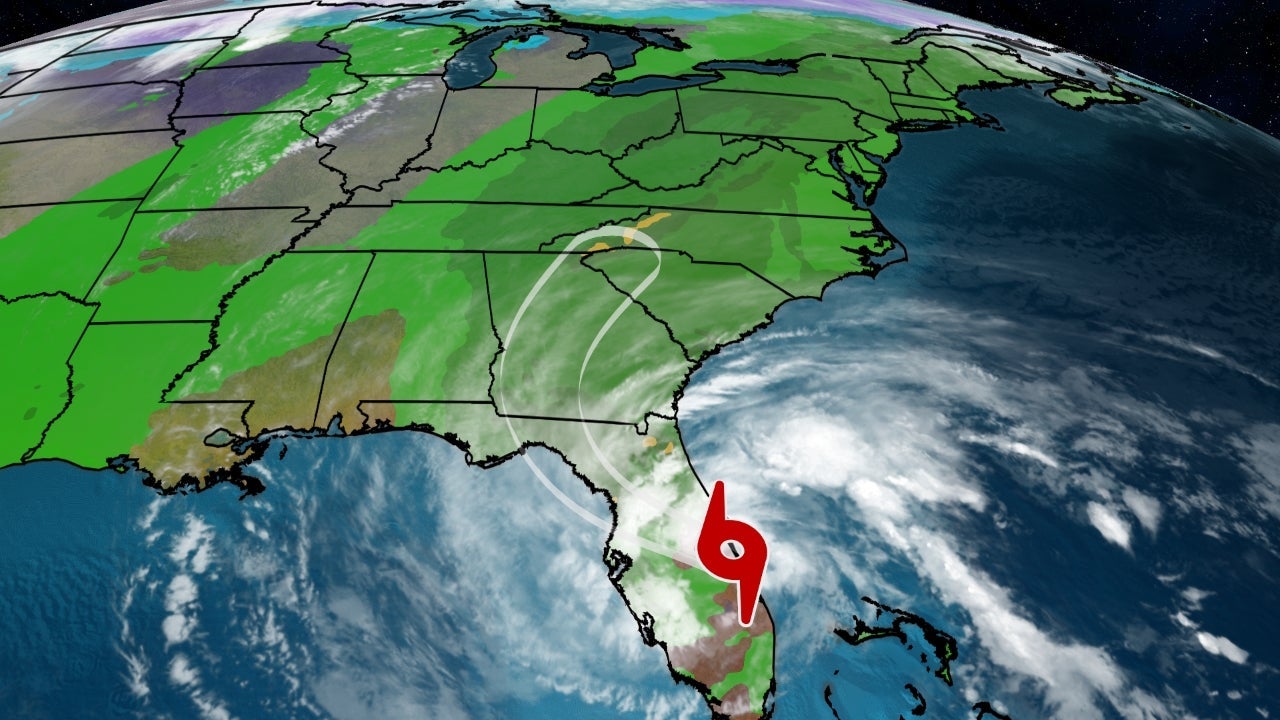 Nicole made landfall in Florida as a hurricane early Thursday morning, but its impacts including prolonged coastal flooding, beach erosion, strong winds, high surf, heavy rain and tornadoes will continue to impact other parts of the Southeast as well as the mid-Atlantic and Northeast through the end of the workweek.

N​ow that Nicole is inland, it has weakened back to a strong tropical storm.

N​icole is just the fourth November hurricane to landfall in the mainland U.S. in records dating to the mid-19th century, and the first to do so in 37 years.

The large wind field of Nicole means tropical storm-force winds (39 mph or greater) extend well to the west, north and east of that center, including much of the Florida Peninsula, coastal Georgia and coastal South Carolina, according to the National Hurricane Center analysis below.

W​inds have have gusted 70 mph or greater on Florida’s Atlantic coast, including in Playalinda Beach (73 mph), Cape Canaveral (71 mph) and Melbourne (70 mph).

A​ NOAA tide gauge reported major coastal flooding this morning at Port Canaveral, Florida, from a storm surge of over 5 feet.

A​ll hurricane warnings have been discontinued now that Nicole has weakened to a tropical storm.

Tropical storm warnings are in effect for a broad area of southern, central and northern Florida, southern Georgia and the South Carolina Lowcountry.​

Cities in the tropical storm warnings include Orlando, Fort Myers, Tampa and Tallahassee in Florida as well as Savannah, Georgia and Charleston, South Carolina.

A​ storm surge warning is in effect from Jupiter Inlet, Florida, to Glynn County, Georgia, a stretch of the St. Johns River in northeast Florida from Georgetown to where it empties into the Atlantic Ocean north of Jacksonville Beach, and along a part of Florida’s Gulf Coast from Pasco County north to Wakulla County. This means a dangerous, life-threatening surge of water along the coast is expected in these areas.

Nicole is forecast to continue weakening today as it curls northwestward over Florida.

It will then get picked up by a cold front that turns the storm northeastward over the Southeast states on Friday. The remnant energy and moisture from Nicole will team up with that cold front to bring heavy rain and gusty winds up the East Coast into Saturday.

Below is a breakdown of what to expect from Nicole. Keep in mind that Nicole’s large size means its impacts will spread far from its center, arriving sooner than, and lasting longer than, the passage of its center.

Persistent onshore winds will lead to coastal flooding along parts of the Southeast coast from Florida to the Carolinas through Thursday, or in some areas, Friday.

The National Hurricane Center’s peak storm surge forecast, if it occurs at high tide, is shown below.

Given coastal flooding over multiple high tide cycles and battering waves riding atop the storm surge, major beach erosion and some damage to infrastructure is expected along Florida’s east coast and parts of the Georgia coast. This is particularly the case for eastern Florida’s coast damaged from Hurricane Ian in late September.

O​ne exception to this general scenario will be a part of western Florida’s Gulf Coast.

Tides will start out much lower than normal due to winds blowing offshore.

But by later Thursday, water levels may quickly rise as winds switch onshore once Nicole’s center moves to the north. This may lead to some coastal flooding and storm surge in the areas shown in the map below peaking Thursday night, but also lingering into Friday.

T​ropical storm-force winds (39 mph or greater winds) will continue to spread across much of the Florida Peninsula on Thursday.

These s​trong winds are expected to knock out power and could down trees, especially near the coast.

W​hile Nicole will have weakened, some strong wind gusts are possible into parts of Georgia, the Carolinas and Virginia through Friday.

N​icole’s remnant teaming up with a cold front and stronger jet-stream energy could produce strong wind gusts Friday night into Saturday morning in the Northeast, from the Delmarva Peninsula and Chesapeake Bay north to New England, particularly near the coast.

T​hese wind gusts could lead to scattered tree damage and at least some power outages Friday into Saturday.

Heavy rain has already arrived in Florida and it should spread north into parts of Georgia and the Carolinas through Friday.

T​he heaviest rainfall totals are expected in parts of central and northern Florida, including some areas flooded from Hurricane Ian’s rain.

S​ome minor river flooding is also forecast along stretches of the Peace and Little Manatee Rivers in western Florida, which suffered major to record flooding during Ian. But this flooding will be nowhere near the magnitude of Ian’s flood.

Nicole’s moisture in combination with an approaching cold front will result in soaking rain for the Appalachians, mid-Atlantic and Northeast Friday into Saturday.

A broad footprint of 1 to 5 inches of rain is possible from parts of southern Florida into the Carolinas, Georgia, mid-Atlantic and Northeast, with locally higher amounts.

T​his could lead to localized flash flooding and some river flooding, particularly in the Appalachians and adjacent foothills, as well as parts of the Northeast.

As with most landfalling storms, s​ome isolated tornadoes and damaging thunderstorm wind gusts are also possible in Nicole’s rainbands from Thursday through Friday.

H​ere’s a look at the timing.

-Friday-Friday Night: central and eastern Carolinas into the mid-Atlantic.

L​arge, pounding waves and coastal flooding are impacting much of the Southeast coast. Water levels topped out around 2 feet above normal along Florida’s Atlantic coast with Wednesday morning’s high tide.

F​looding was reported around homes on Anastasia Island, near St. Augustine, and on some streets in West Palm Beach, Wednesday. A sea wall was breached by storm surge in St. Lucie County near Jensen Beach. Beach erosion undermined one structure and ate away at a parking lot of a hotel in Daytona Beach Shores.

S​torm surge flooding was also captured on video Wednesday morning in Marsh Harbour, in the Abaco Islands of the Bahamas, pummeled by Hurricane Dorian in 2019. Winds have gusted up to 60 mph in Hope Town, according to the Bahamas Department of Meteorology.

Check back with us at weather.com for important updates on Nicole.

The Weather Company’s primary journalistic mission is to report on breaking weather news, the environment and the importance of science to our lives. This story does not necessarily represent the position of our parent company, IBM.