Musqueam Nation: Trutch Street’s new name to be unveiled on National Day for Truth and Reconciliation 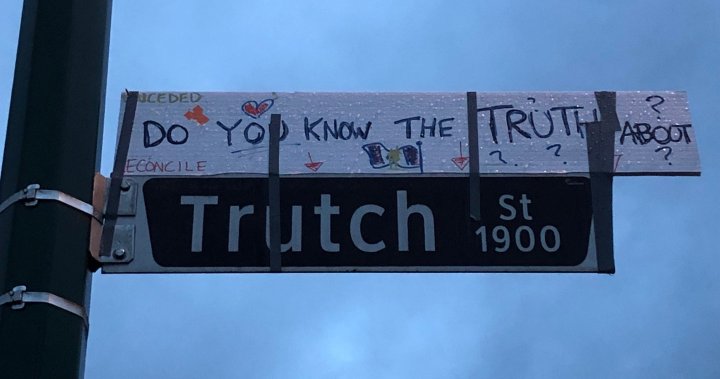 It’s been more than a year since the city of Vancouver decided to nix the Trutch Street moniker because it’s named after a racist colonial leader. It appears the new name can’t come fast enough for some.

The city said it was made aware of the vandalism on Aug. 3, and dispatched crews on Aug. 4 to repair all of the altered signs.

City council passed a motion titled ‘Toward Reconciliation’ from Mayor Kennedy Stewart in July 2021 to rename the street because of racist policies against Indigenous people enacted by B.C.’s first Lieutenant Governor, Joseph Trutch. Before he died in 1904, Trutch was considered an extreme racist.

The Musqueam First Nation is leading the renaming process.

Sparrow said they had hoped to roll out their new name choice on June 21 to coincide with National Indigenous Peoples Day, but needed a bit more time to finalize details.

The new moniker will be unveiled on Sept. 30, National Day for Truth and Reconciliation.

“It bothered our past leaders, our ancestors that have gone, Trutch was the surveyor, he actually surveyed this existing reserve so it was our leaders back in the day [who] said that that name should be removed,” Sparrow said.

“It’s going to be an exciting day to have us recognized in our area, and I think the name will have a connection to Musqueam.”

On July 10, the city of Victoria officially renamed their Trutch Street to Su’it Street, which means truth in the Lekwungen language.

The capital city’s name change had been almost five years in the making, and began with a student-led movement.

The newly-renamed two block Su’it Street in Victoria is home to Trutch’s former residence, which is now a heritage building.