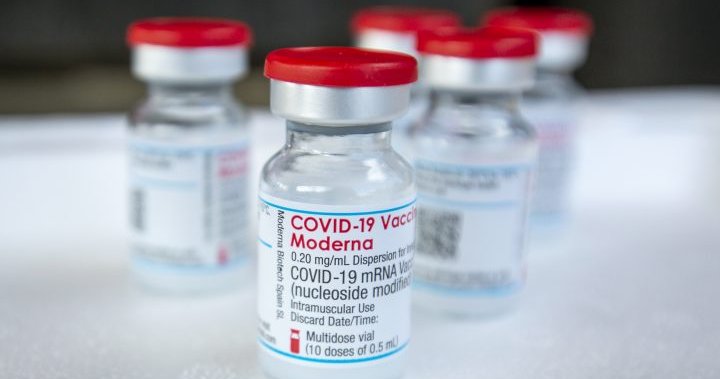 Drugmaker Moderna’s CEO set off fresh alarm bells in financial markets on Tuesday after he warned that COVID-19 vaccines were unlikely to be as effective against the Omicron variant as they have been against the Delta version.

Crude oil futures shed more than a dollar, the Australian currency hit a year low, and Nikkei gave up gains as Stéphane Bancel’s comments spurred fears that vaccine resistance could lead to more sickness and hospitalizations, prolonging the pandemic.

“There is no world, I think, where (the effectiveness) is the same level . . . we had with Delta,” Moderna CEO Bancel told the Financial Times in an interview.

“I think it’s going to be a material drop. I just don’t know how much because we need to wait for the data. But all the scientists I’ve talked to . . . are like ‘this is not going to be good’,” Bancel said.

Moderna did not reply to a Reuters’ request for comment on the interview and on when it expects to have data on the effectiveness of its vaccine against Omicron, which the World Health Organization (WHO) says carries a “very high” risk of infection surges.

Bancel had earlier said on CNBC that there should be more clarity on the efficacy of COVID-19 vaccines against Omicron in about two weeks, and that it could take months to begin shipping a vaccine that work against the new variant.

The WHO and scientists have also said it could take days to several weeks to understand the level of severity of the variant and its potential to escape protection against immunity induced by vaccines.

“Vaccination will likely still keep you out of the hospital,” said John Wherry, director of the Penn Institute for Immunology in Philadelphia.

COVID-19: U.K. to offer booster vaccine to all adults 18+ amid concerns over Omicron

The uncertainty about the new variant has triggered global alarm, with border closures casting a shadow over a nascent economic recovery from a two-year pandemic.

News of its emergence wiped roughly $2 trillion off the value of global stocks on Friday, but some calm was restored this week as investors waited for more data on Omicron.

Remarks by President Joe Biden that the United States would not reinstate lockdowns had also helped soothe markets before comments from the Moderna CEO spooked investors.

Biden has called for wider vaccination, while the U.S. Centers for Disease Control and Prevention has urged everyone aged 18 years and older to get a booster shot. Britain too has expanded its COVID-19 booster program amid Omicron fears.

First reported on Nov. 24 from South Africa, Omicron has since spread to over a dozen countries. Japan, the world’s third-largest economy, has confirmed its first case.

Countries around the world have moved quickly to tighten border controls to prevent a recurrence of last year’s strict lockdowns and steep economic downturns.

Additionally, it said non-residents who have been to Austria, Australia, Belgium, Canada, the Czech Republic, Denmark, Germany, Israel and Italy in the past 21 days would not be allowed to enter the city from Dec. 2.

Singapore’s health ministry said two travelers from Johannesburg who tested positive for the variant in Sydney had transited through its Changi airport.

Australian authorities have also identified a sixth traveler who was most likely infected with the variant and had spent time in the community.

Canberra delayed on Monday the reopening of the nation’s borders for international students and skilled migrants, less than 36 hours before they were due to be allowed back in.

“We’re doing this out of an abundance of caution but our overwhelming view is that whilst (Omicron) is an emerging variant, it is a manageable variant,” Federal Health Minister Greg Hunt said.

5:52
What we know about the Omicron variant

What we know about the Omicron variant

“The people of Africa cannot be blamed for the immorally low level of vaccinations available in Africa – and they should not be penalized for identifying and sharing crucial science and health information with the world,” U.N. Secretary-General Antonio Guterres said in a statement.

India, home to the world’s largest vaccine maker, has approved supplies of COVID-19 vaccines to many African countries and said it stands ready to “expeditiously” send more. China too has pledged 1 billion doses to the continent.