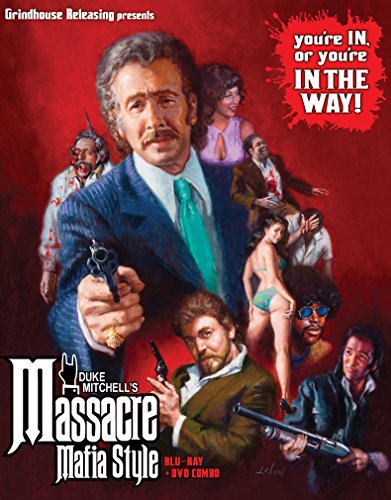 YOU’RE IN, OR YOU’RE IN THE WAY!
Italian-American actor and nightclub singer Duke Mitchell wrote, produced, directed and starred in this homemade answer to THE GODFATHER, self-financed with earnings from his career as the self-proclaimed Mr. Palm Springs. Previously known for his Martin and Lewis act with Sammy Petrillo as seen in BELA LUGOSI MEETS A BROOKLYN GORILLA, Duke plays the ruthless son of a Mafia kingpin who blasts his way through Hollywood on a bloody crime spree. Promising more guts, more action, more dynamite than the Mario Puzo gangster classic, MASSACRE MAFIA STYLE delivers an onslaught of low-budget mayhem unlike anything you’ve ever seen. Grindhouse Releasing proudly presents the definitive release of the most violent movie ever made!