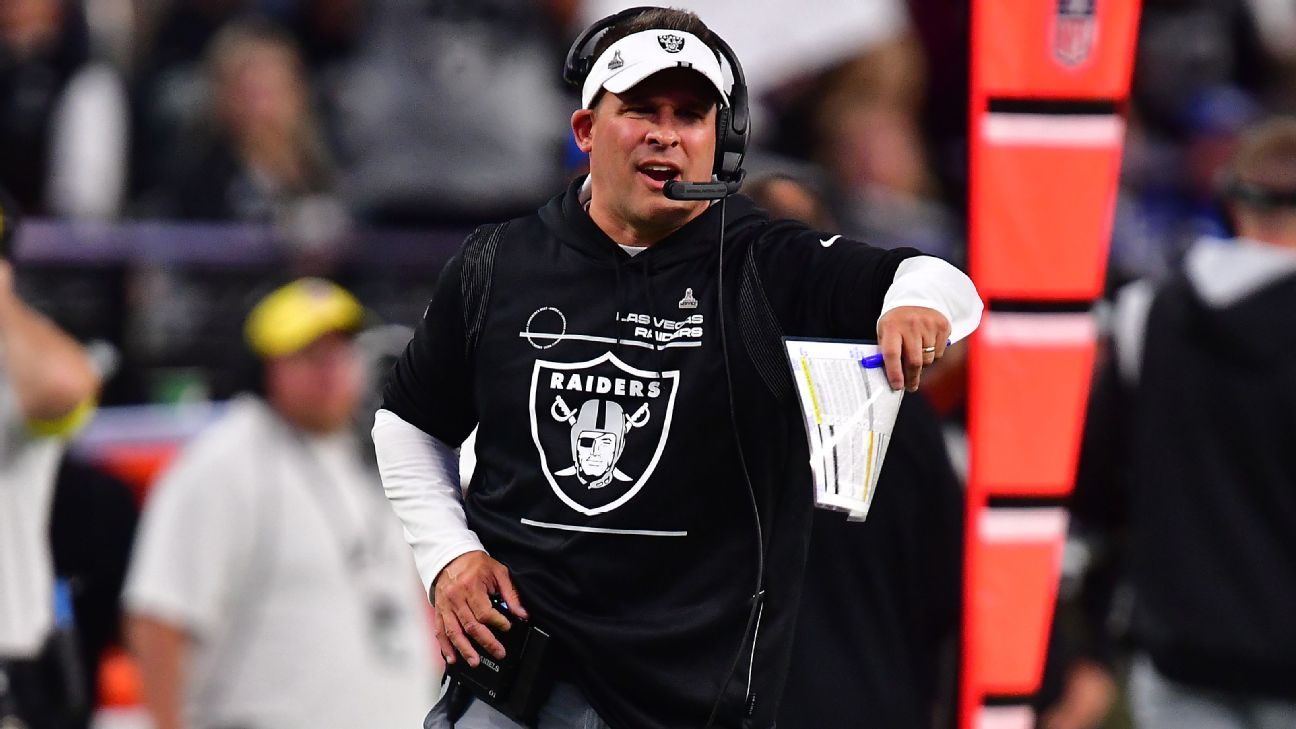 HENDERSON, Nev. — Shortly after Josh McDaniels shared his vision of the Las Vegas Raiders‘ future on Monday, a day after a stunning 25-20 loss to the Indianapolis Colts that dropped his team to 2-7, owner Mark Davis expressed to ESPN that he will be patient with his first-year head coach and the program he is building.

“People in today’s world want instant gratification. The guy’s coached nine games. We’re 2-7, not the results we’re looking for but at the same time we’ve lost six one-score games with the ball and a chance to win at the end,” Davis told ESPN.

Asked about giving a vote of confidence to McDaniels, who was hired in January, Davis said that happened when he signed him to a contract.

“I gave him my vote of confidence when I signed him to a contract to be coach of the Raiders. That’s when I gave it to him,” he told ESPN.

Davis added: “Rome was not built in a day.”

Earlier Monday, McDaniels said he will stay the course amid rumors about his job security.

“We are building,” McDaniels said in his weekly Monday media conference. “I have never used the word ‘rebuilding,’ or anything like that. It’s the National Football League; there’s not five years to do that.

“There’s a process that we’re trying to go through. Certainly, slower and more painful than anybody wants it to be.”

“I’m going to control what I can control and do the best I can at my job, and part of that is continuing to think about the future and next year and what goes on beyond the next few months here,” McDaniels said.

Expectations were high for Las Vegas after its unlikely run to a 10-7 finish and the playoffs last season under interim coach Rich Bisaccia and general manager Mike Mayock, after which Davis chose to bring in McDaniels and Dave Ziegler, as GM, from the New England Patriots.

But the Raiders got off to a 0-3 start. And after winning two of three, they have lost their past three games in dispiriting fashion, getting shut out by the New Orleans Saints and former coach Dennis Allen, blowing a 17-0 lead (their third such loss of the season) at the Jacksonville Jaguars, and then Sunday’s loss to the Colts, who had a coach who had never coached above the high school level in Jeff Saturday, an offensive coordinator who had never called plays in the NFL before in Parks Frazier and a 37-year-old quarterback who had been benched earlier this season in Matt Ryan.

“We’re not trying to do anything other than win every game, and that’s what we will continue to do,” McDaniels said. “I think the reality is, I do understand the short-term history of this place. I was educated on it; they talked to me about it when I came here — trying to get something together that can last and sustain and win and win and win and win and win. We’re not doing enough of it now, and we understand that. But at the same time, that was the vision for us, to try to figure out what is going to be part of the future, what isn’t. And how we proceed going forward is going to impact that.

McDaniels said the goal is to “have a culture and the kind of people on the team that continue to try to uphold that year after year after year” in Las Vegas.

“I understand the short-term frustration. I get it. I really do.”

McDaniels is 13-24 as an NFL head coach after previously going 11-17 with the Denver Broncos before being fired during his second season in 2010. He started his coaching career by going 6-0 with the Broncos but is just 7-24 since.

Also Monday, the Raiders made a move to aid their defense, claiming 2019 first-round pick Jerry Tillery off waivers from the Los Angeles Chargers. Tillery, a defensive tackle who was waived by the Chargers last week, has 10.5 sacks and three forced fumbles in 54 career games.

The No. 28 overall pick in 2019, the Chargers declined over the offseason to pick up the fifth-year option on Tillery’s rookie contract. He appeared this season in seven games but did not start. He recorded a sack and forced fumble.