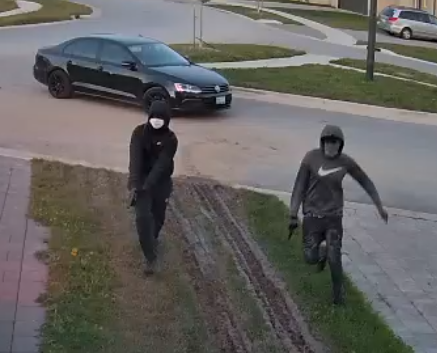 New photos are now available to the public as police in London, Ont., continue to investigate the murder of Lynda Marques.

The 30-year-old was fatally shot as she arrived at her north London home on Wateroak Drive on the evening of Sept. 10, 2021, according to police.

Investigators believe the suspects later fled the scene in a black Volkswagen Jetta. On Sept. 15, 2021, the suspect vehicle was found abandoned on Meadowlily Road South near Commissioners Road East.

Police later determined the Jetta had been stolen from Bluffers Park and Beach in Scarborough on Sept. 5, 2021, according to police.

Police say the vehicle has undergone “extensive forensic examination, and analysis of evidence gathered is ongoing.”

In new information released on Tuesday, police said investigators believed those involved in the murder of Marques are from the Greater Toronto Area and had travelled to London from the GTA on Sept. 9, 2021, before leaving immediately after her death.

Police are appealing to the public for information on: