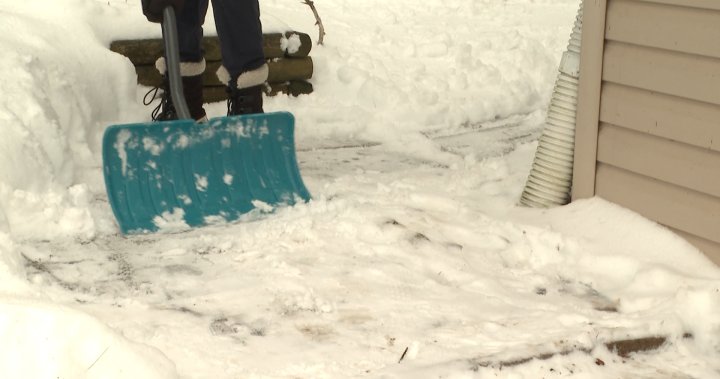 Shovelling by hand isn’t how Kingston, Ont. resident Jammie To expected to be spending the snowy months.

To hired Richardson Services, a general contracting and snow removal business, on Dec. 6 to remove snow from her property until April 16.

“He told me that they have a business licence, that the price includes HST, that they have insurance coverage,” says To. “So it really put all the ticks in the boxes I was looking for.”

After two small snowfalls in December, To says two men with shovels showed up late in the night.

However, after Monday night’s 42 centimetres, she called to discover the company’s phone number had been disconnected and the Facebook page was gone.

A new one appeared on Tuesday, indicating the company is bankrupt and permanently closed.

“I’m frustrated with myself that I have fallen for such a scam,” To says.

Global News has heard from at least four people who say they were left to dig themselves out, after Richardson Services never showed up, despite taking their money.

Those people include Gale Degeer, who organized snow removal for her daughter.

“She was so upset and when she tried to access his link it came back saying, ‘closed due to COVID,’ and I was like, ‘What,’” says Degeer.

Global News tried reaching Jamie Boch, the company’s owner according to those who paid Richardson Services, and only received an automated message through a newly created Facebook account that read: “Hi, thanks for contacting us. Currently we are closing down. We do appreciate all the support the community has given us but at this time we are unable to acquire or complete any more jobs or current clients. Thanks and have a great day.”

A tenant at the building told Global News they had never heard of the company.

Lennox and Addington OPP have followed up on complaints and decided the matter is a civil one, leaving paying customers frustrated and upset.

According to Kingston resident Ed Gordon, this isn’t the first winter this has happened.

“The number I had for him wasn’t working and he wasn’t answering e-mails and I just wrote it off as a learning experience, I guess you can call it,” says Gordon.

Multiple people have filed reports with Kingston Police and the OPP, but were told that it was a civil matter.

According to one lawyer we spoke with, small claims court is likely the only way for the snowed-in customers to get their money back.

But if the business is truly bankrupt, getting their money back is a long shot at best.