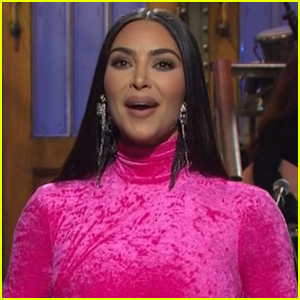 The 40-year-old reality star hosted the hit NBC sketch comedy series for the first time ever on Saturday (October 9).

In her monologue, Kim brought the laughs as she poked fun at plastic surgery, her sex tape, O.J. Simpson, her divorce from Kanye West and so much more.

“I’m excited to be here tonight to show you guys that I’m so much more than just a pretty face… and good hair and great makeup and amazing boobs and a perfect butt,” Kim said. “Basically, I’m just so much more than that reference photo my sisters show their plastic surgeons.”

Kim then roasted herself, joking about her sex tape with Ray J.

“I only had that one movie come out — and no one even told me it was premiering,” Kim said. “It must have slipped my mom’s mind.”

“But the one thing I’m really proud of is that no one could ever call me a gold digger,” Kim said. “Honestly, I’m not sure how you even become one. So I asked my mom’s boyfriend Corey.”

“I married the best rapper of all time. He’s also the richest black man in America who gave me four amazing children,” Kim said about Kanye. “So when I divorce him, that means it comes down to just one thing…personality.”

“OJ does leave a mark. Or several. Or none at all! I still don’t know,” Kim said, referencing his murder trial when he was accused of murdering the late Nicole Brown Simpson.

At the end of her monologue, Kim teased that she going to announce that she was going to run for president, but said it was just a joke.

“I’m not running for president we can’t have three failed politicians in one family,” Kim said, referencing Kanye‘s failed presidential run and Caitlyn Jenner‘s failed run for governor of California.