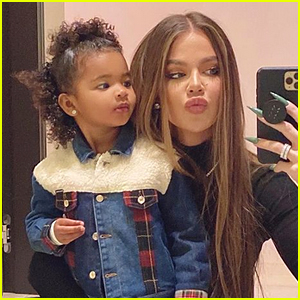 Khloe Kardashian is responding to those who call her daughter True “big.”

The 37-year-old reality star was asked about her three-year-old daughter, who she shares with Tristan Thompson, during her interview with Health.

“When it comes to food — I had so many issues. It wasn’t from one person, I guess just from society or how people critiqued my body,” Khloe told Shape. “So, I don’t play when it comes to True. She’s very tall. People will always say, ‘She’s so big.’ And I’ll say, ‘Oh, she’s so tall.’ I try to make them be more descriptive. I know what an adult means when they say that, but I don’t want her to misinterpret that.”

“If that’s who she is, I’m not trying to make her not be that way. But sometimes, I’ll notice she may bump into something. I’ll say, ‘Are you OK, Tu-Tu?’ And she’ll say yes and kind of brush it off. I do try to always tell her that it’s OK if she cries or if something is wrong,” she continued.

Khloe recently revealed that she was having a dilemma with True.

Khloe Kardashian Calls Out People for Making Up ‘Fake S–t’

True stories: How these 6 people overcame huge health and fitness barriers (and you can too).
Share
Facebook
Twitter
Pinterest
WhatsApp
Previous articleTen Spiritual Lessons from St. Teresa of Avila
Next articleNew Study Shows Disturbing Amounts of Plastic in Baby Poop