Kelowna, B.C. woman has ‘flying mountain’ named after her 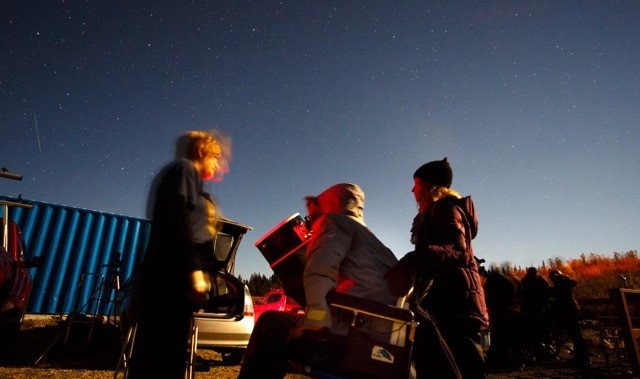 Colleen O’Hare’s namesake should be around long after she’s gone; around 4.5 million years longer, give or take a millennium.

The International Astronomical Union which is based in France recently named one of its numbered asteroids after the Okanagan woman, and she couldn’t be more honoured.

“Who has a flying mountain named after them,” she said, laughing all the while.

The name is officially Colleenohare and the asteroid that now bears her name was first spotted on Sept. 13, 1991 by H.E. Holt, who was the first to identify almost 700 asteroids between 1989 and 1993.

According to the union writeup, O’Hare is an active member of the Royal Astronomical Society of Canada, Okanagan Centre, who won the 2012 Qilak Award for her outreach efforts and the RASC Service Award in 2018 for her leadership, which included a term as club president as well as committee service.

She led the development of the club observatory’s SkyTheatre and has been, for many, the Okanagan’s conduit to the stars.

All that said, she still can’t believe her namesake will be whizzing by in the night sky once in year — even if it will only look like a tiny point of light.

“(The asteroid) orbits the sun every five years, and it’s 300 million kilometres away from earth,” she said.

Nonetheless, it’s a “ very special honour,” that came about when her fellow local stargazers nominated her in secret.

“It was an absolute shock, I would never have expected this to happen, nobody leaked information to me, there was not even a wink of the eye,” she said.

With this honour, she will be able to add a personal touch to star-studded events she speaks at. In normal times, there are about 100 events a year in parks, schools and libraries aimed at sparking interest in the heavens among children.

Public viewings of the night sky were held regularly on Friday evenings in the summers before the onset of the COVID-19 pandemic in early 2020. The adjacent Sky Theatre includes seating areas and projector screens where volunteers can explain to visitors what they are about to see up close through the telescope.

“We hope to open the observatory and Sky Theatre again this year,” O’Hare said, adding that she would like to have more people come out if possible.

To go get a glimpse of collenohare while standing with Colleen O’Hare, or simply learn more about the stars above go to the Okanagan Observatory when it opens. It is exactly four km up Big White Road from Highway 33

Club members will have their telescopes on hand and be using the observatory’s 25-inch telescope to show off celestial wonders such as the Moon, planets, comets, dying stars, stellar nurseries, globular clusters, open clusters and galaxies.