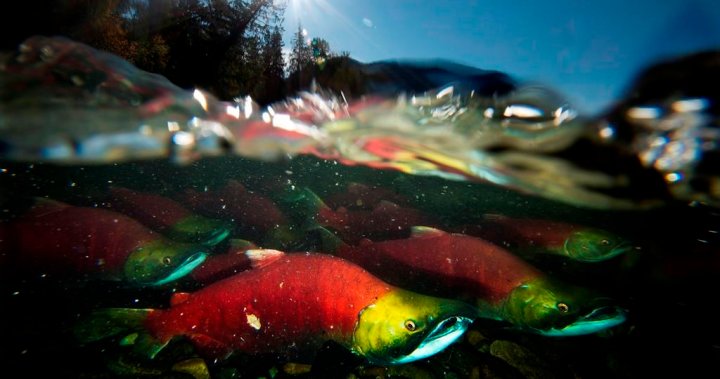 The kʷikʷəƛ̓əm (Kwikwetlem) First Nation has begun work on a new hatchery it hopes will help replenish the “main staple” sockeye salmon run in its territory.

Nation leaders joined BC Hydro, Fisheries and Oceans Canada and Metro Vancouver in a blessing and ground-breaking ceremony Thursday at the skʷƛ̓əma:ɬ x̌acaʔ Watershed, also known as the Coquitlam Lake Watershed.

“The name kʷikʷəƛ̓əm is ‘Red Fish Up The River,’ so we take our name after (the salmon),’” Chief Ed Hall told Global News. “They used to be so plentiful 120 years back.”

Sockeye salmon are inseparable from kʷikʷəƛ̓əm culture, identity and livelihood, and once sustained the nation’s people from season to season.

The population flourished before the opening of the Coquitlam Dam in 1913, which took place without consultation with kʷikʷəƛ̓əm First Nation, and despite a moving letter of protest from the nation’s chief of the day.

kʷikʷəƛ̓əm Coun. George Chaffee said he grew up hearing stories of the time “the fish died” in the Coquitlam river and that “our name died with it.”

0:38
Could road salt be having an impact on B.C.’s salmon population?


Since 2003, kʷikʷəƛ̓əm First Nation has succeeded in restoring restoring a small sockeye run. The new hatchery aims to build on that progress.

“When we found those fish up here, the elders had a feeling. Something told them they were trapped behind here,” Chaffey said.

“kʷikʷəƛ̓əm people are the ones who pushed for them … it meant the heartbeat of my community was back.”

The kʷikʷəƛ̓əm Sockeye Hatchery is slated for completion in 2023 and will be operated by the nation. BC Hydro, Metro Vancouver and DFO are partners, providing a mix of funds, resources, training, technical support, and more.

“This (dam) was built more than 100 years ago by a predecessor company to BC Hydro. It was done in an age when there was very little concern for First Nations people, no consultation or process, and no real consideration of environmental and social effects,” BC Hydro CEO Chris O’Riley said.

“Times have changed and I think we get better work done today, we get better outcomes and achieve stronger relationships in the process.”

Chaffey described the construction of the dam as one of the “most significant colonial harms” done to kʷikʷəƛ̓əm people.

1:48
The impact of drought conditions in B.C. can be seen with the state of spawning salmon right now


The hatchery will target the capture of 30,000 eggs for annual incubation, according to the nation, and the priority is to raise 15,000 fish to release at the smolt stage after spending 18 months at the hatchery.

Hall said the project is grounded in conservation and reconciliation, and in keeping with the United Nations Declaration on the Rights of Indigenous Peoples.