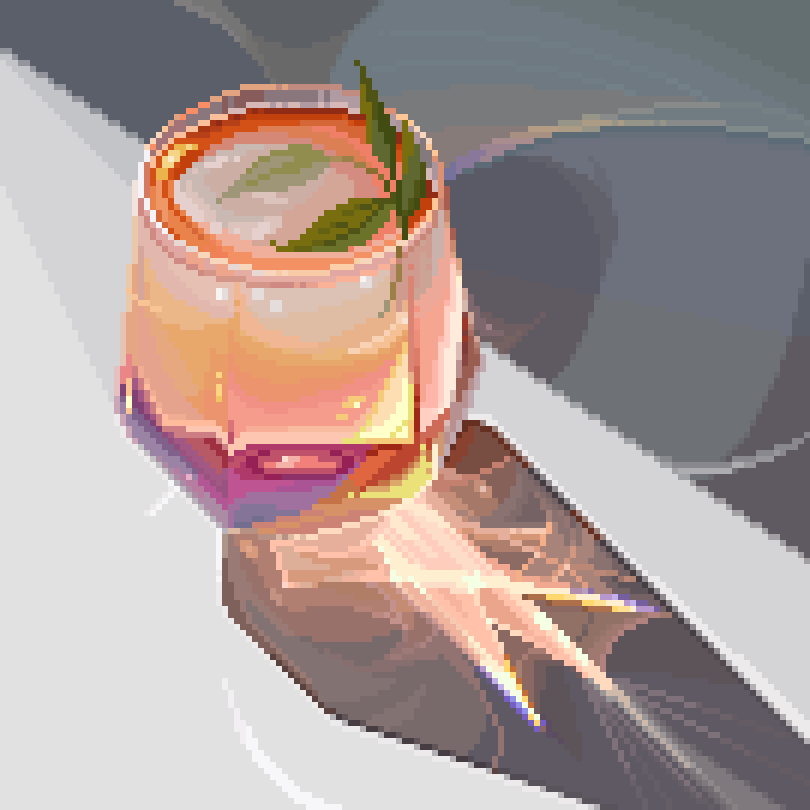 Forget the low-res Mario of the 16-bit era, or the first renderings of Pokémon from the early chapters of that 25-year-old franchise. Today, pixel art (dotto kei in Japanese), the staple of indie video games, has gone far beyond gaming. Thanks to Tumblr and its more successful cousins, Instagram and Twitter, pixel art is a fully legitimate genre for digital artists.

One such pixel enthusiast is Pacific Northwest-based artist Jubilee, who goes professionally by her first name only. Though she’s best known for her serene landscapes, their clouds reflecting magical sunsets and moonlight, I came to her work through her Instagrammed “tea studies,” artworks depicting beverages in mugs, cups, or tumblers. “I honestly started [making them] because I saw the original photographs online, and thought they just felt so warm,” says Jubilee, with whom I spoke recently by phone. “I really like making people feel things whenever they look at my art.”

Around 2014, she recalls, she started seeing a lot of pixel art on Tumblr, including work by Waneella, best known for detail-rich cityscapes, and 1041uuu, who specializes in serene, pictorial-like landscapes—two artists who became catalysts for her to more thoroughly explore the medium. “They make a lot of cityscapes and stuff like that, and really intricate lights, stars, and moons. And they always animated their works,” Jubilee says. And while she hasn’t yet gotten around to animating her own art, by 2018 she’d gained enough of a following and workload to be able to quit her day job in retail. She now combines her individual art practice with commissions from the likes of Microsoft, Magic: The Gathering, and Paris Fashion Week.

“My inspiration is mainly the 2000s handheld games for Game Boy Advance, like Kirby and Fire Emblem,” Jubilee says. “I actually find myself going back to Kirby a lot for inspiration, because of the colors.”

Jubilee now photographs most of what she’ll turn into pixel art works, after which she proceeds to sketching. “I usually do that with actual pencil and paper,” she explains. “So I’ll look at the image just to get my own proportions.” She then photographs the sketch and traces it in Photoshop, to start the piece with a digital line drawing. Throughout the process, she uses a drawing tablet and Photoshop’s 1-pixel-wide “pencil” tool. The original image always lies next to the working canvas—she generally uses a 135×135 or 175×230 canvas—for reference. “It really just depends on how many pixels you want to have in the piece; so you can detail them, but too many pixels also means that you lose seeing actual pixels.”

Next, Jubilee looks for “mood colors”—a palette to set the mood for each artwork. “If I want a happy sunset, or I want it to feel like the sunrise of a new day or something like that,” she says, “I’ll think bright blues, yellows… If you’re making a moonscape or something in the middle of the night, it’s going to be blues for a solemn, melancholic reflective mood; so you want to choose darker blues into purples. I always think those are magical.”

“Then I always work from background colors to foreground, shadows to light, just because I think it’s easier that way,” Jubilee continues, adding that the main challenge in a pixel art work is trying to block out the main colors. “You want to lay them out into a similar pattern,” she says. “And then once you get a similar pattern of colors, you can just kind of do your own thing and make it look better. It doesn’t necessarily have to look realistic—it just has to look good.”

What makes Jubilee’s art pop is the way highlights are rendered, whether flickers of light reflected from a glass surface, the moonlight, or sunlight peering from clouds. “I think contrast is definitely key. You can’t have muddy colors, because white—the ultimate visual representation of light—isn’t muddy,” she says. “As you’re blocking out colors, you want to make sure you’re keeping light in mind. When I first started [making] art, I would only work in grayscale, so I’d focus only on lighting, making sure the lighting was right, and then I’d go to color.”

Once the color is blocked out and the light pattern is set, it’s time to deal with texture. “The way you do different textures [depends on] the way you want to interpret it,” Jubilee explains. One of her tea studies, for example, features a glass with a diamond pattern. “I just did diamond patterning, and then you want to fill in the diamonds as you go.”

Next, to render the light so it harmonizes with the rest of the piece, it’s important to make sure there’s some curve in it, Jubilee says. Yet there’s no hard-and-fast rule, other than observation: “It’s a lot easier when you’re looking at a reference—I couldn’t do this without a reference.”

How does one decide when a pixel art work is done? “With pixel, it’s really hard to stop, because you can literally stare at one pixel and just keep going back over and over it, because it looks wrong,” she says. “But as I’ve gotten better and made more art, I’ve realized that I just need to get to a stopping point. It’s not about being perfect, it’s about getting it done.”