In must win game, Jets fall flat in 3-1 home loss to Detroit – Winnipeg 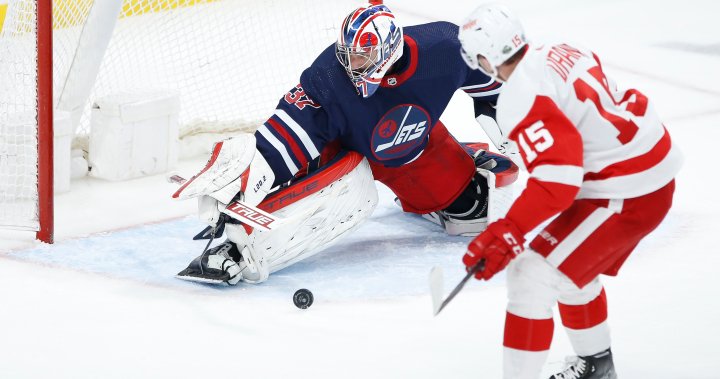 Whatever thread the Winnipeg Jets’ playoff hopes were hanging on by, the Detroit Red Wings took a pair of scissors to it Wednesday night.

Fully rested and facing a team that played at home the previous night, the Jets fell to the Wings 3-1, a third straight loss that all but sticks a fork in their postseason chances.

The first period was mostly uneventful, with the Jets having a couple decent chances to score. The best chance went to Paul Stastny, who was robbed on the doorstep by Thomas Greiss.

Late in the period, Josh Morrissey drew a penalty on a great net drive. But on the ensuing power play, a turnover led to a 2-on-2, where Dylan Larkin found Sam Gagner streaking to the net.

The veteran forward made no mistake, beating Connor Hellebuyck to give the Wings a 1-0 lead after one. It’s also the third time in as many games that Winnipeg has allowed a shorthanded goal as well as the 500th point of Gagner’s career.

Just over six minutes into the second, the Jets drew even. Nate Schmidt’s point shot was tipped in the slot by Mark Scheifele, beating Greiss to make it a 1-1 game.

Schmidt and Kyle Conner were back in the lineup after missing the last three games because of COVID protocol.

Less than five minutes later, it looked like the Jets had taken the lead on a nearly identical goal. Dylan DeMelo’s point shot was deflected by Blake Wheeler in the slot and past Greiss, but a quick review showed Wheeler was offside when the Jets gained the zone seconds earlier.

With eight minutes left, the Wings had their best offensive zone shift of the game, leading to a great scoring chance for Lucas Raymond, but the rookie drilled the post from the slot.

The iron bailed Hellebuyck again a few minutes later when Jakub Vrana was sprung on a breakaway following a strong shift by the Jets in Detroit’s end. Vrana tried to snap one blocker-side but he rang it off the pipe.

Winnipeg held a 13-5 edge in shots on goal after the first but Detroit piled up the shots in the second, outshooting the Jets 17-9 to bring both teams to a 40-minute total of 22 shots.

The visitors grabbed the lead just shy of the midway point of the third. After Hellebuyck stopped the initial Detroit chance, a scramble ensued and Michael Rasmussen knocked home the loose puck. Both Wheeler and Pierre-Luc Dubois were nearby but neither could prevent Rasmussen from getting to the puck first.

Moments later, Vrana was sprung on his second breakaway of the game but Hellebuyck turned him aside to keep it a one-goal game.

With 6:44 to go, the Jets were dealt a tough blow when Zach Sanford received a double-minor for high sticking. But with just over a minute left in the penalty, Detroit was called for having too many men on the ice.

Winnipeg decided to gamble and pull the goalie with more than three minutes left, starting when the teams were 4-on-4 and continuing after Sanford got out of the box.

The Jets could not take advantage.

With 36.5 seconds remaining, Gagner deposited his second of the game into the empty net to seal the deal for Detroit, handing Winnipeg a dagger of a loss.

Both goaltenders were excellent, each making 32 saves in the game.

The Jets now have 11 games left in the season, continuing Friday night at home against the high-flying Avalanche.