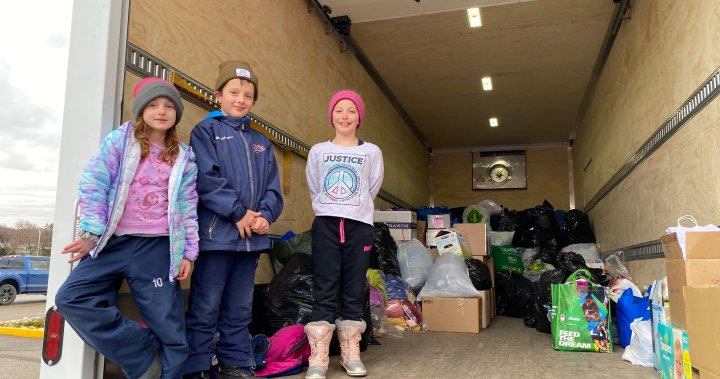 Times may be difficult for some Regina residents as of late, but that isn’t stopping help to those who need it.

On Saturday, people were in the giving mood as residents stopped at two separate donation events in the city.

The first was held by Regina Chip Repair with the tagline, “Fill the Tent,” where they collected winter clothing ahead of the snowfall and low temperatures.

The goal was to fill a giant tent with winter coats, boots, socks, gloves and more.

But thanks to some early morning rain, “Fill the Tent” turned into “Fill the Truck.”

“The weather was iffy this morning and we got really wet,” said Regina Chip Repair co-owner Carrie-Lynn Stryletski. “But we feel like whoever needed these items wakes up in that weather every day, so we’re glad to be here.”

This is the second year Regina Chip Repair has hosted the event. Last year, they ended up with two 15-foot U-Haul trucks full of gear.

All donations are being given to Awasiw: A Place of Hope, a nonprofit organization that provides a warm place for the homeless and clothing to those in need.

People of all ages donated and helped run the event.

“I helped out here last and it’s been really great,” said Sophie, a nine-year-old from Regina.

“This is my first year and it’s really fun and we’re excited to be here,” said seven-year-old Tenley, whose older brother Cole was also helping pack the truck.

Across town, another donation event was taking place as radio station Jack 94.5 held their annual “Stuff the Bus” drive.

The goal was to collect non-perishable food items, with the hope of stuffing a Regina transit bus to the brim with food that would be dropped off at the Regina Food Bank.

“The food bank is helping 12,000 families every month,” said Jenn Dean with Jack 94.5. “That’s 400 families a day, so every little bit we can do really matters. We really are neighbours helping neighbours.”

The bus will make its way to the food bank Saturday night with supplies being handed out as soon as they arrive.

“Hunger doesn’t discriminate, so it’s really nice to see a whole community coming together like this,” said Sean Dean with Jack 94.5.

2:00
Residents call for raw meat donations to be accepted by community fridges in Regina