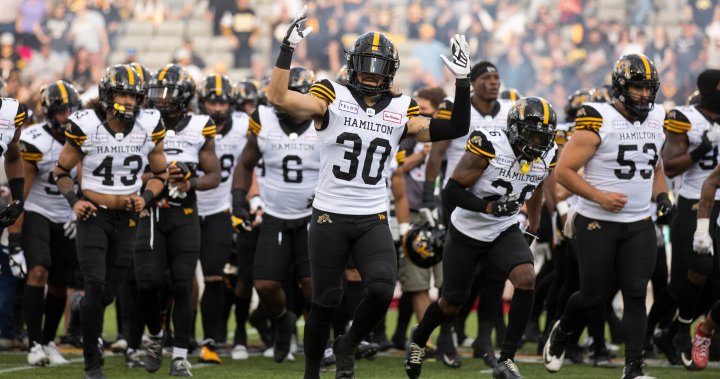 The Hamilton Tiger-Cats returned to the field Saturday night for the first time since their gut wrenching overtime loss in last year’s Grey Cup. They beat the Montreal Alouettes 25-22 on a last second field goal from rookie Tadhg Leader.

The game at Tim Hortons Field in Hamilton was the first preseason tilt for both CFL teams.

Leader hit a 35-yard kick as time expired, after Montreal had taken a one-point lead just seconds earlier when QB Davis Alexander ran for a one-yard touchdown with 25 seconds to play in the game, and then connected with Krishawn Hogan on a two-point convert.

Most of the Tiger-Cats’ starters played limited minutes, including quarterback Dane Evans, who completed four of his five pass attempts for 46 yards.

Montreal opened the scoring on a 79-yard drive that soaked up more than four minutes of playing time and culminated with QB Trevor Harris throwing a four-yard touchdown to receiver Reggie White Jr.

Alouettes kicker David Cote booted a 32-yard field goal with 3:16 remaining in the first quarter to extend Montreal’s lead to 9-0 before the Ticats answered with a touchdown of their own.

Aided by a pass interference penalty that placed the football on the Montreal one-yard line, backup quarterback Matt Shiltz ran for a touchdown on the next play to cut the Alouettes’ lead to 9-7.

The Tiger-Cats took a 10-9 lead early in the second quarter when rookie kicker Seth Small drilled a 39-yard field goal.

Small is competing against incumbent Michael Domagala and Leader, a Global rookie, for Hamilton’s kicking job.

The Ticats retook the lead at 8:24 of the third quarter when rookie pivot Jalen Morton ran for a 10-yard touchdown, but the ensuing two-point convert failed, leaving Hamilton ahead 16-15.

Domagala was good for a 49-yard field goal late in the third quarter and Small drilled a 48-yarder with 3:30 to go in the fourth quarter to give Hamilton a 22-15 advantage.

Punting was an issue for the Cats as Joel Whitford, Blake Hayes and Leader averaged 31.2 yards on six punts.

Hamilton will wrap up their preseason schedule on June 3 when they take on the Toronto Argonauts in a game that will be played at the University of Guelph.