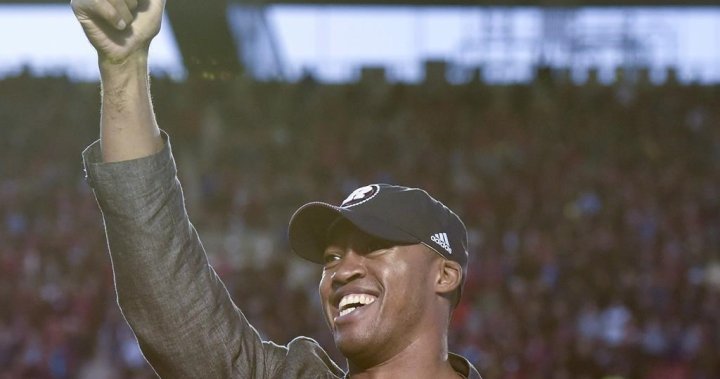 Henry Burris and Rick Campbell are together again.

Campbell, the B.C. Lions head coach and co-GM, hired Burris as an offensive consultant Tuesday. Burris finished his CFL career playing for Campbell in Ottawa, leading the Redblacks to a 2016 Grey Cup victory in the final game of his Canadian Football Hall of Fame career.

Burris returns to the CFL after spending two seasons on the Chicago Bears coaching staff. He served as a seasonal coaching assistant in 2020 before being named offensive quality control coach last year.

Burris said he entertained coaching offers on both sides of the border but his familiarity with Campbell played a major role in his decision.

4:30
The BC Lions have hired the first full time female coach in CFL history

The BC Lions have hired the first full time female coach in CFL history – Feb 16, 2022

“It was huge,” Burris said. “Rick is so cool, calm and collected? and to see him celebrate in 2016 after winning the Grey Cup still brings tears to my eyes.

“He’s a guy who never gets too high or too low but to see him finally come out of his shell after we won, I want to help him get back to that. I want to be in his shoes one day, I do want to be a head coach? the best way to learn is to learn from the greats, right? Rick Campbell is one of those in my book.”

CFL to hold draft combine at University of Waterloo on Thursday

Burris ended his CFL career in style, passing for 461 yards and three TDs in leading the Redblacks to a 39-33 overtime Grey Cup win over Calgary. It was Ottawa’s first football championship in 40 years.

“Henry is a tremendous addition to our coaching staff,” Campbell said in a statement. “His knowledge, experience and communication skills will be a huge asset to both our quarterbacks and the entire offence.”

B.C. Lions team up with province to tackle racism in schools

Burris will be tasked with teaching a young B.C. quarterback corps after Mike Reilly, a two-time Grey Cup champion and former CFL MVP, retired at season’s end. Sophomore Nathan Rourke, a 23-year-old Victoria native, was promoted to the No. 1 position.

“Working with quarterbacks has been my life,” Burris said. “I’ve got this wealth of knowledge and I’ve got to hand it to somebody because I mean, I’m getting old and I need to share all the things that I’ve learned.”

Burris finished his career with 63,227 passing yards (third-most all-time) and 374 TDs (third overall). He was inducted into the Canadian Football Hall of Fame in 2020.

The six-foot-two, 209-pound Rourke started two of the 13 games he appeared in last season as a CFL rookie. He completed 52-of-82 passes (63.4 per cent) for 754 yards with three TDs and five interceptions while rushing 18 times for 111 yards (6.2-yard average) and five touchdowns.

Rourke started B.C.’s season-opening 33-29 loss to Saskatchewan on Aug. 6 before Reilly started the second half. Rourke finished 23-of-34 passing for 359 yards and a TD and ran seven times for 34 yards and three touchdowns in the Lions’ season-ending 43-10 home win over Edmonton on Nov. 19.

“He’s been able to see the field for an entire year and make the adjustments coming from Ohio,” Burris said of Rourke. “You’ve got to make great decisions and it’s all in your hands as far as whether the team is going to win or lose ? and I think he’s made those adjustments.”

“Michael is a guy, to me, who has a wealth of talent, a wealth of ability,” Burris said. “He’s been put into a good situation by Rick to come in and compete.

“You’re going to go through your rough times, can you learn from those rough times and be able to grow from it? I I just want to be of service to those young men ? and help them find an easy way and efficient way to grow and be the best they can be.”

Burris will head to Vancouver later this month for staff meetings, then return to B.C. for training camp in May. His family, though, will remain in Chicago and Burris himself won’t be with the Lions on a daily basis during the season but will only be a phone or zoom call away.

“I’ll still be here working from afar,” he said. “I’ll make sure I’m doing zoom calls with the quarterbacks and talking about things we rehearse during training camp so there’ll always be constant communication taking place.”