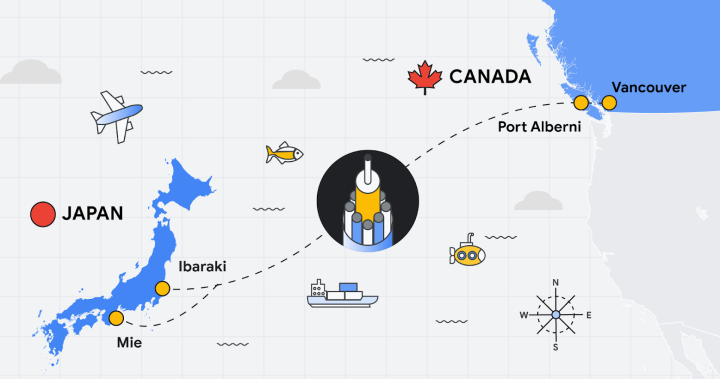 Google has announced plans to build the first ever high-speed fiber-optic cable to connect Canada to Asia.

The new submarine fiber cable, which will be the width of a garden hose, is expected to be completed next year. It will run from Vancouver to Port Alberni on Vancouver Island, then across the floor of the Pacific Ocean to Japan’s Mie and Ibaraki prefectures.

The cable, called Topaz, is expected to make accessing Google products like YouTube, Gmail, and Google Cloud faster and “will increase capacity to the region for a variety of network operators to both Japan and Canada,” Bikash Koley, the head of Google Global Networking said in a blog post last week.

The tech giant is working with Japanese and Canadian partners to construct the cable, which will be accessible for internet other providers as well.

“We’re essentially increasing the reliability of the bandwidth that we can offer them,” Bobby Ninan, senior staff engineer for Google, said in an information video.

The Hupacasath, Maa-nulth, and Tseshaht First Nations, whose traditional territories the cable will be built alongside, support the project.

“This agreement, in which both Google Canada and our Nations benefit, is based on respect for our constitutionally protected treaty and aboriginal rights and enhances the process of reconciliation,” Chief Charlie Cootes, president of the Maa-nulth Treaty Society, said in the blog post.

In the 1960s, a copper undersea cable called the Commonwealth Pacific Cable System connected Vancouver Island to Australia, with stops in Hawaii and New Zealand.

According to Koley, that cable is now retired, but the same facility it was connected to in Vancouver will house the end of the Topaz cable.