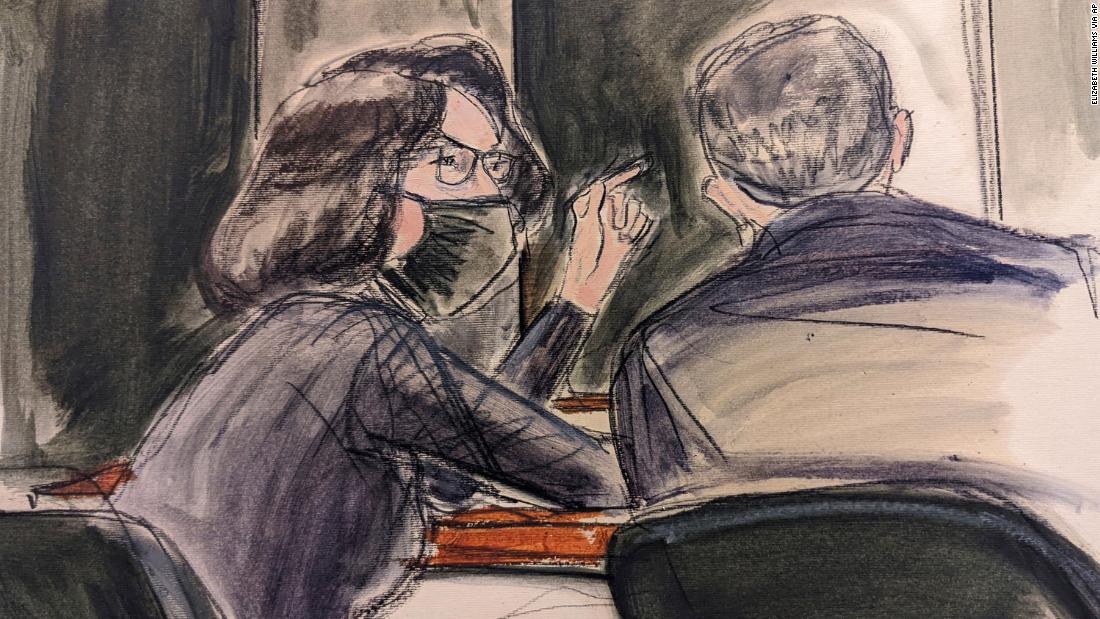 Friday’s witnesses included Annie Farmer, the fourth and final accuser to take the stand. She testified she was 16 years old when Maxwell massaged her naked chest at billionaire Jeffrey Epstein’s New Mexico ranch in 1996.

Maxwell faces six counts, including sex trafficking of a minor, for allegations of conduct that allegedly occurred between 1994 and 2004.

The government alleges Maxwell facilitated and at times took part with Epstein in the alleged sexual abuse described by the four accusers.

Defense attorneys moved for an acquittal at the end of the court Friday, which is standard practice after the prosecution rests. Judge Alison Nathan denied the motion.

The defense is expected to start its case next Thursday. The trial will not sit Monday through Wednesday due to a scheduling conflict for the judge.

Defense attorneys said their case will likely take two or three days and they expect to rest on December 20.

Some defense witnesses want to testify anonymously given they “might get a lot of unwanted attention” testifying for Maxwell, attorney Christian Everdell said. The parties will confer on that over the break.

Farmer was the only accuser to testify by her full name in the federal trial in New York. Others did so under pseudonyms or their first name only to protect their privacy.

Farmer, now 42, is identified as “Minor Victim-2” in the indictment detailing the charges against Maxwell. It alleges that Farmer traveled to New Mexico in 1996 where Epstein abused her at his ranch. Maxwell groomed Farmer, giving her an unsolicited massage while she was topless and encouraging Farmer to massage Epstein, according to the indictment.

Prosecutors additionally allege, in a perjury case severed from this trial, that Maxwell denied ever giving Farmer a massage when explicitly asked during a 2016 civil deposition.

Prosecutor Lara Pomerantz told Farmer to look around, “Do you see anyone in this courtroom who has ever given you a massage?”

Farmer testified that Maxwell gave her a massage at Epstein’s New Mexico ranch in 1996, telling her she wanted Farmer to experience how nice a professional massage felt.

“She told me to get undressed,” Farmer, 16 at the time, recalled.

At some point as she lay on her back, Maxwell pulled the sheet down, exposing her naked breasts and rubbed her chest and upper breast, Farmer testified.

“Once she pulled down the sheet I felt like kind of frozen,” she testified. “It didn’t make sense to me that that would happen. I just wanted so badly to get off the table and have this massage be done.”

On her last day at the ranch Epstein bounded into her guestroom where she still lay in bed telling her he wanted to “cuddle.”

“He climbed into bed with me and kind of laid behind me and reached his arms around me and like pressed his body into me,” she said.

Feeling uncomfortable, she made an excuse to get out of bed and went to the bathroom, closing the door behind her.

And on Tuesday, a woman who used only her first name, Carolyn, testified that Maxwell once touched her breasts, hips and butt and told her she “had a great body for Epstein and his friends.” She was 14 at the time, she said.

The trial, which began last week, has alternated between disturbing testimony from sexual abuse victims and testimony about some of Epstein’s connections to high-profile figures such as Donald Trump, Bill Clinton and Prince Andrew. None are alleged to have committed wrongdoing in relation to the ongoing trial.
Epstein, who pleaded guilty in 2008 to state prostitution charges, was indicted on federal sex trafficking charges in July 2019 but died by suicide in prison a month later. Maxwell, his former girlfriend, was arrested a year afterward and has pleaded not guilty.
In opening statements of her trial, prosecutors said Maxwell and Epstein created a “pyramid scheme of abuse” to lure underage girls into sexual relationships with Epstein and pay them bonuses to bring other girls into the fold. Her defense, meanwhile, said she was a “scapegoat” for Epstein’s actions and attacked the memories and motivations of the women who say they were sexually abused.

Farmer testified that she told her mother, Janice Swain, in the summer of 1996 that something happened to her at the New Mexico ranch without going into detail. “I told my mom I was not raped and I didn’t want to talk about it,” she said.

Swain was the last witness in the government’s case and told the jury that she spoke on the phone with Epstein to plan Annie’s trips to New York and New Mexico.

Swain testified that when the billionaire invited Farmer to go to the ranch he told the mother it would be for a “retreat” with 20 to 25 other students who Epstein would also be funding for enrichment trips abroad later that year.

Epstein told Swain that “his wife, Ghislaine” would be chaperoning the girls on what she was told was a co-ed retreat, she said. But Farmer said she was surprised when she was the only one there.

Farmer also said Friday that she years ago had confided in a boyfriend and spoke to law enforcement in 2006.

The boyfriend, David James Mulligan, testified Friday they started dating in the fall of 1996.

He said Farmer confided in him that Epstein touched her leg at the movies in New York and spoke of the massage in New Mexico. Mulligan recalled that she told him she felt “fearful and awkward and helpless” during the massage.

Farmer said she first met Epstein over the holidays in 1995 into 1996 through her older sister, who worked for him in New York. Epstein paid for her commercial flight there and tickets for the Farmer sisters to see “Phantom of the Opera” on Broadway, she testified. At some point on that trip Epstein took the sisters to see the movie “Five Monkeys,” she recalled.

Farmer read portions of January 1996 diary entries in which she wrote about Epstein holding her hand and “caressing” her foot while her sister sat on the opposite side of Epstein in the theater.

She testified that Epstein would stop touching her any time he spoke to her sister as if to hide it from her.

What appeared to be an inner struggle unfolded in the journal entry. Farmer wrote that she felt “weird” about his behavior but it was probably “normal” and “fine.”

“I know it sounds like me trying to justify him doing something weird but it isn’t,” 16-year-old Farmer wrote.

Annie Farmer also wrote that she didn’t tell her sister about the incident because her sister “worshiped” Epstein and she feared it would upset her or cost her sister her job.

‘I imagined it would be different’ with Maxwell present

Defense attorney Laura Menninger during cross examination repeatedly pointed out that Maxwell was not present on Farmer’s New York trip.

Annie Farmer recalled she wasn’t excited for the New Mexico trip in April 1996 because of the movie incident with Epstein months earlier.

However, knowing Maxwell would on the trip made her more comfortable. “I imagined it would be different this time because Maxwell was there,” she testified.

Maxwell bought her beauty cream and Epstein bought her expensive cowboy boots on a day they all went shopping, she said.

They also went to see the movie “Primal Fear” that day, where Epstein again caressed her in a more “blatant” way, seemingly making no effort to hide it from Maxwell, she recalled.

“She instructed me to you know, pull back his big toe, rub this part of his foot, you know, and so I did what she told me,” Farmer said in court.

Epstein “groaned” with pleasure as she methodically followed Maxwell’s lead massaging his feet, she said.

Menninger asked Farmer several questions suggesting to Farmer that she “pieced together” the timeline around her memory of the New Mexico trip by looking up when “Primal Fear” was released in theaters. Farmer acknowledged doing the research and said she had already recalled it was the spring of 1996 but wanted to be more accurate.

Farmer filed a civil lawsuit against Maxwell and Epstein in 2019 but later dropped the suit as a condition to receive $1.5 million for her claim with the Epstein Victim Compensation Program, she testified.

Menninger admitted Farmer’s black leather cowboy boots into evidence and had her review the footwear on the stand. Farmer testified that she’d found the boots in her mother’s storage unit after a move years later and chose to wear them, “reclaiming” the boots that were tied to a “dark” memory.

Menninger clarified with Farmer that she’d worn them to the point of wearing down the heels and scuffing the toes.

The defense attorney also suggested that Farmer overstated what she alleges happened to her in her public statements and on her Epstein Victim Compensation Program application for personal gain.

The judge permitted the defense to review Farmer’s victim fund application during cross examination. The claim says Farmer was “groped” during the massage by Maxwell.

Farmer responded on the stand, “Yes, I don’t see that as significantly different — rubbed, groped, massaged.”

“I was 16 years old when I had the misfortune of meeting Jeffrey Epstein here in New York,” Farmer said at the July 2019 hearing. Her voice cracked as Epstein stared at her just feet away, his gaze unwavering. “He was inappropriate with me.”