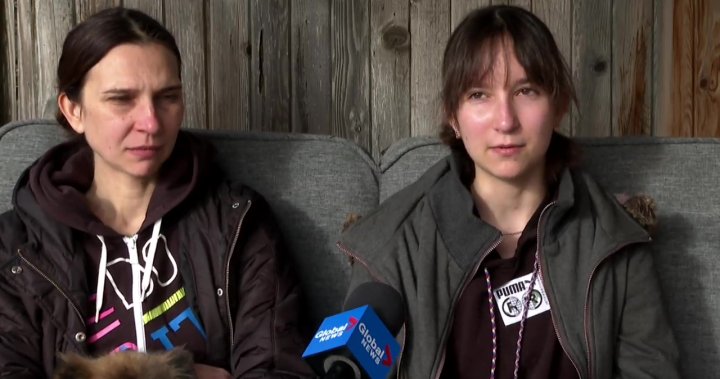 A Ukrainian mother and daughter have come to Alberta to start over for a second time, but this time leaving behind a husband and brother.

The Pustovoyts were forced to flee their home and lives in 2014, when war broke out in the Donbas region of Ukraine.

They found themselves on the run again in February, when Russia started the war in Ukraine.

Sergey, Irina, their son Max, and daughter Polina are originally from Donetsk, where they had a life, a house and a successful business.

It was hard to believe that a war was breaking out for Irina, until one day in 2014 when she was driving ten-year-old Polina to gymnastics. The car ahead of her stopped to let a military vehicle pass, then suddenly began to back up.

Not knowing what was happening, Irina got out and saw a military man pointing a rifle at the man in the car and yelling to keep his distance and back up.

Irina dropped Polina off and went home on her regular route through the central square.

“On the square, there were a lot of people and a lot of militaries shooting up in the air from their rifles,” said Irina. “My parents told me they were celebrating victory.”

“It was all terrible. Previously, all celebrations in my city were with fireworks and not shooting.”

Sergey and Irina decided to leave, thinking they’d be back in two weeks.

Irina said she “packed a small suitcase and told myself ‘it’s impossible, I will definitely go back.’ and I did not take it.”

“We took a train. It was the last possible day to leave the city. The next day, the bombing of the railway stations began, and train traffic was closed,” said Irina.

They began a new life from scratch in Kyiv.

Sergey and Max found good jobs, the family got a new car and apartment and finally started to get back on their feet.

The morning of Feb. 23, now 17-year-old Polina said, like usual, she went to university and her parents went to work. She stayed up late that night to catch up on studying and went to sleep around 3 a.m.

“I woke up at 5 or 6 because my father said that Mariupol is bombed,” said Polina.

Her brother came into her room to tell her to pack a bag of necessities. They were joined by another family in the hallway of their third floor apartment, where they stayed for two sleepless nights.

“It was really awful,” said Polina.

On Feb. 25, they saw people packing their cars and leaving so, they decided to do the same.

After 10 hours of driving with the sounds of explosions and airstrike warnings, they arrived in Novovolynsk, where they met a friend who helped get them organized to get to safety in Poland.

There, they found out that they weren’t able to stay together.

“Unfortunately, my brother and father can’t come with us because of martial law and they are fighting age,” said Polina.

Irina and Polina managed to get to the border by foot and stayed in Poland for a few days, where they volunteered to help other Ukrainian refugees get to safety.

On March 6, they arrived in Staveley, Alta. to the loving arms of sister-in-law Anna Zaporoshchenko and her husband Abby Koshney.

“Here I can finally say that I feel safe,” said Polina.

Anna started a GoFundMe to help Irina and her family get back on their feet again.

They hope they can raise awareness of what is happening in Ukraine.

“It’s really nice to know that I’m from a country where people are so united and so patriotic. They risk their lives for themselves and everybody else in the world,” said Anna.