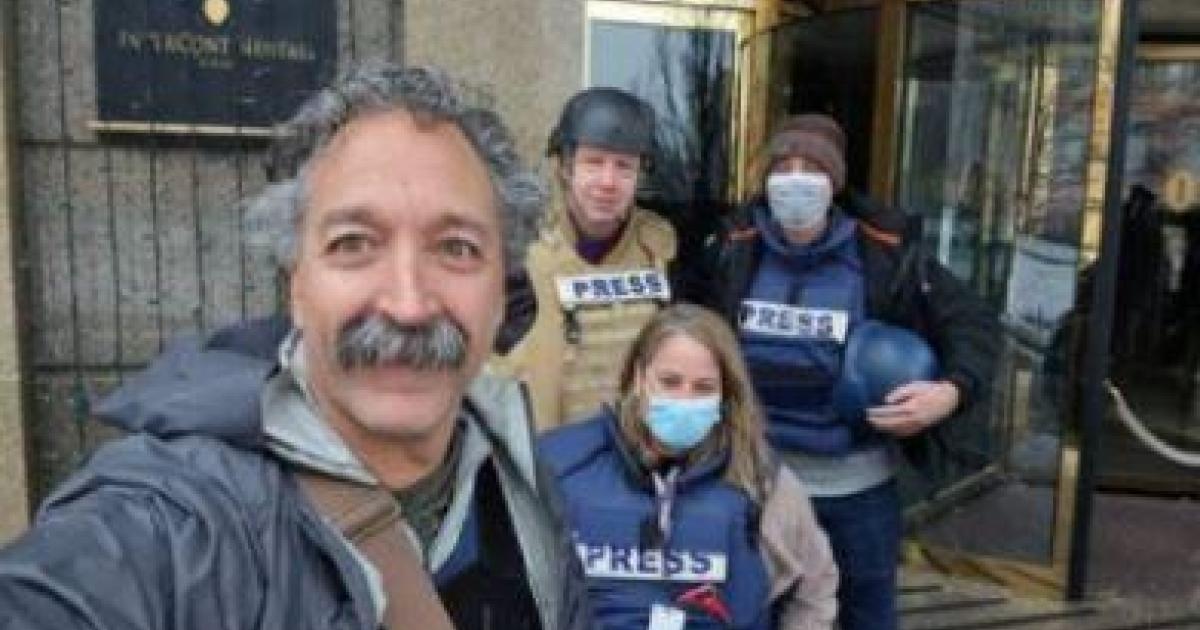 A Fox News cameraman was killed Monday in the same attack that left the network’s correspondent Benjamin Hall injured as they reported near Ukraine‘s capital Kyiv, the network said on Tuesday. Fox News said in a statement that cameraman Pierre Zakrzewski was killed when the vehicle that both he and Hall were riding in “was struck by incoming fire.”

“I worked with Pierre many times around the world. He was an absolute treasure,” said Fox News anchor John Roberts in a tweet, offering prayers to his colleague’s family.

Fox News CEO Suzanne Scott said that Zakrzewski, who was based in London, had “covered nearly every international story for Fox News from Iraq to Afghanistan to Syria during his long tenure with us,” adding that “his passion and talent as a journalist were unmatched.”

“He was profoundly committed to telling the story and his bravery, professionalism and work ethic were renowned among journalists at every media outlet,” Scott said.

“Pierre Zakrzewski was an absolute legend at this network and his loss is devastating,” Fox News anchor Bill Hemmer said on the air Tuesday. He quoted Fox president Jay Wallace as saying that other staff “always felt an extra sense of reassurance when they arrived on the scene, and they saw that Pierre was there.”

“He was a professional, he was a journalist, and he was a friend,” said Hemmer. “We here at the Fox News Channel want to offer our deepest condolences to Pierre’s wife, Michelle, and his entire family. Pierre Zakrzewski was only 55 years old, and we miss him already.”

Just last year, the network honored Zakrzewski with a FOX News Media Spotlight Award, which it says present managers with the opportunity to recognize “extraordinary employees who go above and beyond, inside and outside the workplace.”

Fox’s statement offered no update on the condition of Hall, their correspondent wounded in the same attack, but he remained hospitalized on Tuesday.

On Monday, the network confirmed that Hall “was injured while newsgathering outside of Kyiv in Ukraine.”

Scott said in a Monday memo to employees that the network had a “minimal level of details right now, but Ben is hospitalized and our teams on the ground are working to gather additional information as the situation quickly unfolds.”

News of the attack on the Fox crew came just a day after another American journalist, Brent Renaud, was shot and killed in Ukraine. The head of Kyiv’s regional police force said Renaud was killed and another journalist was wounded by Russian forces in the town of Irpin outside the capital of Kyiv as they were traveling to film refugees.

“We know Ben for his warmth, good humor and utmost professionalism,” Tandon said in a statement. “We wish Ben a quick recovery and call for utmost efforts to protect journalists who are providing an invaluable service through their coverage in Ukraine.”

Hall recently made headlines for rebuking Greg Gutfield, co-host of the Fox News political talk show “The Five,” after he said on-air that the reporting from Ukraine “is a lot like other stories that we’ve gone through in the digital age in which an image is taken and then played over and over and over again to create some kind of emotional response out of you, because that makes a profit for news companies.”

“This is not the media trying to drum up some emotional response,” Hall said. “This is absolutely what’s happening.”

“It is an absolute catastrophe,” he added. “And the people caught in the middle are the ones who are really suffering.”

Victoria Albert is a News Editor at CBS News. Reach her at victoria.albert@viacomcbs.com