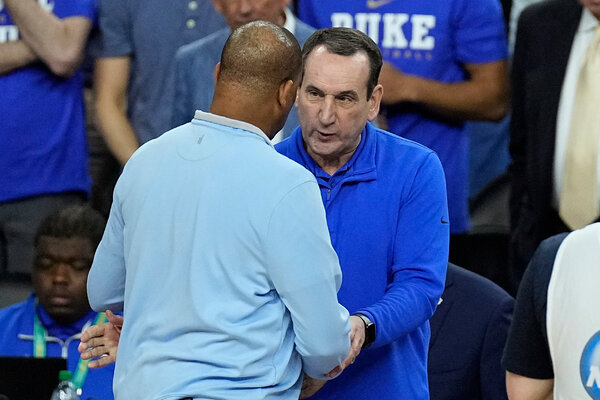 NEW ORLEANS — When Kansas Coach Bill Self sat down in recent days to look at film of his last trip to the Final Four, he could not stomach watching more than 12 minutes. It is easy to imagine his gut churning, his palms getting clammy and his head starting to spin.

“I get tics whenever I think about it,” Self said of the 2018 semifinal in which the highlights may have well ended after Kansas scored the opening basket. The game devolved into a convincing defeat to Villanova, which would go on to win the national championship.

Self and a handful of players quietly took that whipping — their second consecutive loss in the Final Four to Villanova — and made sure it did not happen against on Saturday, surging to an early lead and fending off the Wildcats down the stretch for an 81-65 victory.

Kansas will play the winner of Saturday night’s other semifinal between North Carolina and Duke on Monday night, allowing them to vanquish another memory — losing its most recent championship game, in the same Superdome a decade ago.

The Jayhawks moved on thanks to a near-flawless performance from Ochai Agbaji, their fifth-year senior guard, who scored 21 points and made all six 3-pointers he attempted — including the first shot of the game — and 23 points by center David McCormack. Combined, the two Kansas anchors made 15 of 18 shots.

And they needed to be that good.

Villanova, playing without Justin Moore, who ruptured his Achilles’ tendon last week, tried to shoot its way back from an early 19-point deficit but its guard triumvirate — Collin Gillespie, Brandon Slater and New Orleans native Caleb Daniels — did not quite have enough.

The Wildcats drew within 64-58 on Jermaine Samuels’ 3-point play, but could get no closer. When Christian Braun hit a 3-pointer with the shot clock expiring, it gave Kansas a 71-59 lead and all but spelled the end.

It was hard to imagine a worse start for Villanova.

Kansas scored the first 10 points, Villanova turned the ball over on four consecutive possessions and Agbaji was on fire, making his first four shots, all 3-pointers. When Agbaji sliced through the Villanova defense and dished to McCormack for a rim-rattling dunk, Kansas had thrust its lead to 26-11 a little more than 10 minutes into the game, prompting a timeout by Villanova.

That Agbaji would play such a central role was hard to see coming when he arrived in Lawrence five years ago. He was one of the better players in Kansas City and an excellent student, but he did not even start for his Amateur Athletic Union team, MoKan Elite, and so he came to Lawrence as somebody whom the coaches hoped would be a good teammate and grow into a role player.

Instead, he has morphed into something much more — an athletic wing with a deadly jump shot who was the player of the year in the Big 12, the most competitive conference in the country over the last few seasons, and a first-team All-America.

Agbaji on Saturday night was the fulcrum of a Kansas offense that whirled and cut, the sound of sneakers persistently squeaking on the Superdome floor as the ball zipped around the perimeter, relegating one of the nation’s most determined defenses to ball chasing.

Complementing Agbaji on the perimeter was McCormack, the lumbering senior center who has sometimes found himself at the wrong end of defensive mismatches, but on this night was a force inside against Villanova center Eric Dixon and the Wildcats thin frontcourt.

When McCormack threw down a dunk over Samuels midway through the second half, he let out a roar and celebrated so fiercely — tapping himself on the head — that an official warned him on the way down the court to cool it.

This was only the latest trial of Villanova’s toughness and togetherness this season.

In the waning seconds of the South regional final victory over Houston, Moore, a junior guard, ruptured his Achilles’ tendon. In a flash, the Wildcats had lost their best defender, a vital ballhandler, fearless shotmaker and fierce leader. As the Wildcats celebrated their victory, they did so only after gathering around Moore who had a towel draped over his head on the team’s bench.

Villanova’s tight rotation had already been narrowed by the loss of reserve Jordan Longino, who tore cartilage in his knee during practice before the start of the N.C.A.A. tournament.

If there was some comfort for the Wildcats, it is their familiarity with managing a short-handed roster.

A year ago, they lost Gillespie to a knee injury at the end of the regular season. They regrouped to play well in the N.C.A.A. tournament, advancing to the round of 16 where they led eventual champion Baylor midway through the second half before wilting.

Wright said that on Monday he was watching film and figuring out who would replace Moore on out-of-bounds plays and on the press-break offense when he called Gillespie to ask if he needed to address the team about Moore’s absence.

“No way,” Gillespie told him. “Everybody is good. Don’t worry about it.”

The way Saturday night unfolded, perhaps he should have.