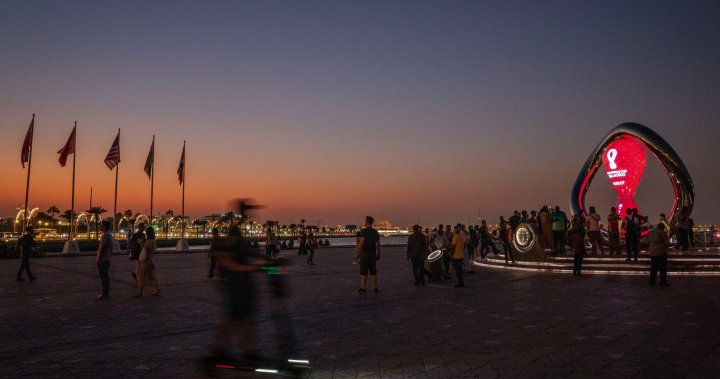 At first, Saskia Nino de Rivera was excited about going to Qatar for a World Cup that would mark a significant professional event for her partner, a sports agent for Mexico soccer players. She even contemplated privately proposing there during a game, and posting photos once they left the country.

But as the lesbian couple learned more about laws on same-sex relations in the conservative Gulf country, the plans no longer sounded like a good idea. Instead, Nino de Rivera proposed at an Amsterdam stadium this summer and opted to skip the World Cup altogether.

“As a lesbian woman, it’s really hard for me to feel and think that we are going to a country where we don’t know what could happen and how we could be safe,” she said. “It was a really hard decision.”

Nino de Rivera’s concerns are shared by many LGBTQ2 soccer fans and their allies worldwide. Some have been mulling whether to attend the tournament, or even watch it on television.

Qatar’s laws against gay sex and treatment of LGBTQ2 people are flashpoints in the run-up to the first World Cup to be held in the Middle East, or in any Arab or Muslim country.

Qatar has said all are welcome, including LGBTQ2 fans, but that visitors should respect the nation’s culture, in which public displays of affection by anyone are frowned on. With his country facing criticism over a number of issues, Qatar’s emir, Sheikh Tamim bin Hamad Al Thani, recently argued it “has been subjected to an unprecedented campaign” that no host country has ever faced.

0:41
Government diplomats must ‘speak out on these abuses’ if attending 2022 FIFA World Cup: Human Rights Watch


An ambassador for the World Cup in Qatar, however, has described homosexuality as a “damage in the mind” in an interview with German public broadcaster ZDF. Aired this week, the comments by former Qatari national team player Khalid Salman highlighted concerns about the conservative country’s treatment of gays and lesbians.

Some LGBTQ2 rights activists are seizing the moment to draw attention, with a heightened sense of urgency, to the conditions of LGBTQ2 citizens and residents in Qatar. They want to raise concerns about how these people may be treated after the tournament ends and the international spotlight fades.

Dario Minden, who is from Germany, said he’s keen on soccer but won’t watch a single minute of the tournament as a show of solidarity with LGBTQ2 people in Qatar. Recently, he jumped at the opportunity to lobby for change.

At a human rights congress hosted by the German soccer federation in Frankfurt, Minden told the Qatari ambassador to Germany that Qatar should abolish its penalties for homosexuality.

“I happen to be a gay football fan and I thought that this is a great opportunity to speak in front of such a high representative, to connect the topic with a face,” Minden said in an interview.

Rasha Younes, LGBTQ rights senior researcher in the Middle East and North Africa at Human Rights Watch, said that while Qatari officials have offered some reassurances for LGBTQ fans, the possibility of stigma and discrimination remained in housing, access to health care and safely reporting potential sexual violence.

At the same time, she argued, “suggestions that Qatar should make an exception for outsiders are implicit reminders that Qatari authorities do not believe that its LGBT residents deserve basic rights or exist,” adding her organization was concerned about conditions for local LGBTQ2 people, including after the tournament.

2:37
Migrant worker rights put in the spotlight ahead of 2022 FIFA World Cup


Qatari law calls for a prison sentence of one to three years for whoever is “instigating” or “seducing” a male to “commit sodomy,” as well as for “inducing or seducing a male or a female in any way to commit illegal or immoral actions.”

In the run-up to the World Cup, Qatari security forces have been accused of mistreating LGBTQ people. In a statement, the Qatari government has denied those allegations: “Qatar does not tolerate discrimination against anyone, and our policies and procedures are underpinned by a commitment to human rights for all.”

Dr. Nasser Mohamed, an openly gay Qatari activist who now lives in the United States, is among those saying that international attention is disproportionately focused on visitors and not enough on LGBTQ people in Qatar. He publicly came out and has been lobbying to expand the conversation before the World Cup.

“Being in a country that has no LGBT visibility, no conversations about what it’s like to be an LGBT person, made me feel like there’s something wrong with me,” he said in an interview. With the current intense public debates, “I feel like there is a moment of urgency to…put something out there now to actually let people know that we’re not OK.”

FIFA World Cup: ‘No plan’ yet for Ottawa to send dignitary amid Qatar rights issues

Josie Nixon of the You Can Play Project, which advocates for LGBTQ people in sports, said the group was part of a coalition of LGBTQ rights organizations that made demands of FIFA and the Qatari organizers. These included repealing laws targeting LGBTQ people, providing “explicit safety guarantees” against harassment, arrest or detention, and working to ensure the long-term safety of LGBTQ people in the region.

“FIFA and Qatar have taken steps to make sure that LGBTQ fans are safe, but is that enough to change the way Qatar views LGBTQ citizens?” said Nixon, who lives in Colorado. “My answer is no.”

Even before the tournament kicks off, questions about what legacy it would leave behind loomed large amid intense international scrutiny over Qatar’s human rights record, including treatment of migrant workers. As the World Cup neared, Qatari officials sounded increasingly frustrated, saying their country’s achievements and progress were being overlooked and that the attacks raise questions about the motive behind them.

“Qatar believes strongly in the power of sport to bring people together and build bridges of cultural understanding,” the Qatari government said in a statement to The Associated Press in response to questions. “The World Cup can help change misconceptions, and we want fans to travel home with a better understanding of our country, culture and region. We believe this tournament … can show that people of different nationalities, religions and backgrounds in fact have more in common than they think.”

4:55
Canada makes return to the World Cup in less than a month!


The statement added that Qatar is a country of “warm hospitality” and will continue to ensure the safety of all “regardless of background.”

FIFA’s top officials have recently urged the teams preparing for the World Cup to focus on soccer and avoid letting the game be dragged into ideological or political battles. The officials did not address or identify any specific issue in their message, which angered some human rights activists.

In soccer-crazy Argentina, Juan Pablo Morino, president of the group Gays Passionate About Soccer said he was dismayed by FIFA’s decision to organize the World Cup in Qatar.

“In the election of a host, basic parameters of coexistence should be met. It cannot be that any country is a candidate,” he said.

In Mexico, Nino de Rivera said she would be supporting her fiancee, who will attend the tournament for work, from afar. That makes her sad.

The decision to sit out the World Cup “has to do with being true to your own values and bringing a lot of money to a country where you’re not welcome because of your sexual orientation,” she said. She was scared that if they went as a couple, they might have been harassed or worse while having dinner or walking back to the hotel.