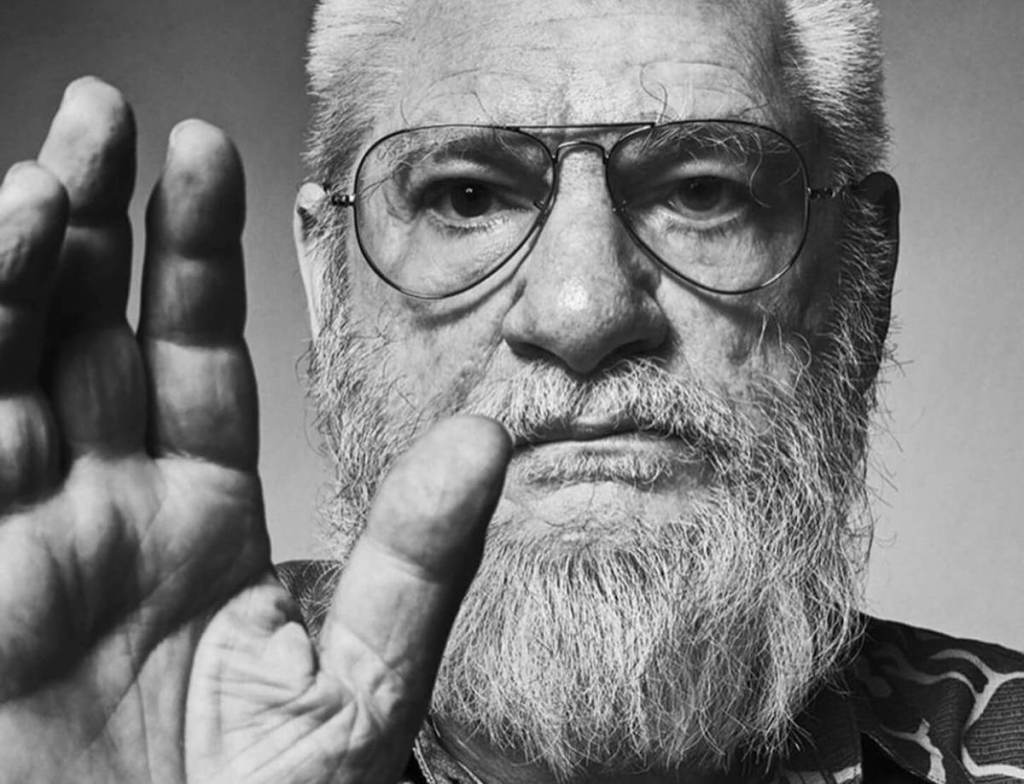 Dan Graham, an unclassifiable artist whose sculptures, performances, and conceptual pieces played on viewers’ perception of themselves, the people around them, and their environments, has died at 79. His four galleries—Lisson Gallery, Marian Goodman Gallery, 303 Gallery, and Regen Projects—said in a statement that he passed away this weekend in New York. A cause of death was not announced.

“His influence over the past half century as a writer, photographer, architect, sculptor, filmmaker and performance artist is widely felt in the contemporary art world,” the statement said.

Long linked as a pioneering artist in the development of Minimalism, Post-Minimalism, and Conceptualism, as well as video as an artistic medium, during the 1960s and ’70s,  Graham claimed no involvement in any movement. Instead, he considered himself an architect or a writer above all else. In a Museum of Modern Art oral history from 2011, he said, “My passion has never been art. It’s always been architecture, tourism, and rock and roll, and rock and roll writing.”

His output was vast and varied. It spanned monumental glass sculptures and small-scaled text pieces, tricky performances about surveillance, and razor-sharp videos about rock ‘n’ roll.

Despite Graham’s disavowal of his status as an artist, he has been influential for generations of artists who have drawn insights from his self-referential text pieces, photography, videos, and sculptures. When Graham was the subject of his first-ever U.S. retrospective in 2009, Whitney Museum curator Chrissie Iles told the New York Times that Graham could be connected to artists like Rirkrit Tiravanija, Tony Oursler, and Wade Guyton, all of whom are 15 years or more his junior. But, Times critic Randy Kennedy wrote, “Their work looks and feels almost nothing like his, or like one another’s, a remarkable testament to the way Mr. Graham’s fascination with perception and with the conventions of art and mass-produced culture have become part of the contemporary art landscape.”

Some of Graham’s most memorable works are his most lo-fi ones from the earliest part of his career. In the mid-’60s, after having briefly tried and failed at being an art dealer, Graham returned to New Jersey, where he had been raised. On the train ride home, he noticed a number of tract houses along the way. These structures became the basis for his first important piece, Homes for America (1966–67), a series of amateurish-looking photographs of tract homes. The piece existed as a feature in the influential Arts magazine, which had intended to publish it near works by Walker Evans. But unlike Evans, whose work Graham did not know at the time, Graham was not a professional photographer, and his shots were in no way polished.

Many of Graham’s other conceptual works evinced a similar deadpan sensibility and were also published by magazines, which he compared to the pods in the 1956 sci-fi movie Invasion of the Body Snatchers, referring to the seemingly innocent way in which publications appear in domestic spaces and infect them. Detumescence (1966), published as a page in a magazine, consisted solely of text from a medical professional explaining what happens to a man’s penis after climax is reached. Schema (1966), which was also intended to be printed in mass media, was composed of text detailing its respective publication’s typography, specifications, and more.

More than simply acting as sly provocations, these works also marked an attempt to disrupt the media’s one-way transmission of information. (He often cited Jean-Luc Godard, the French New Wave filmmaker whose works of the 1960s functioned in a similar capacity, as a major influence in this regard.) These pieces also aligned Graham with Conceptualism, a movement whose progenitors similarly often worked using meta texts that proposed that art did not only exist visually—it also took the form of ideas, too. Graham, who had a tendency to contradict whatever curators, historians, and critics would suggest about him and his work, adamantly denied an affiliation with Conceptualism, however. He pronounced the movement “academic bullshit” in a 2008 interview with musician Kim Gordon.

Dan Graham was born in Urbana, Illinois, on March 31, 1942, and brought up in Winfield, New Jersey. (He was an Aries, and often made sure to mention that in interviews.) His mother was an educational psychologist whose field of work instilled an interest in humans’ understanding of space early on. Graham never received a formal education after high school, though he had a tendency to act like a sponge, soaking up theories by Claude Lévi-Strauss, Margaret Mead, Jean-Paul Sartre, Walter Benjamin, and more in his early years. He had initially set out to become a writer.

In 1964, Graham founded John Daniels Gallery in New York. That gallery was not well-known during its time, but it holds a legendary status within histories of the era because it was where Sol LeWitt had his first show and where a number of Minimalists who later rose to greater fame exhibited early on. But Graham made no sales, and the gallery shuttered a year after its opening.

After his conceptual text pieces, Graham branched out to works that took more expansive forms. While these works often took the format of performances, videos, and installations, the audience was often his medium. “I wanted the spectators to be implicated,” he said in his MoMA oral history.

These works of the late ’60s and early ’70s made time and space seem malleable and strange. Video, at the time a relatively new technology, was something Graham wanted access to, and so he began teaching at the Nova Scotia College of Art, which was then a hotspot for artists working in the medium. There, he produced Roll (1970), a double projection in the mode of Bruce Nauman’s genre-defying works. One image shows the artist rolling down a hill holding a camera, while the other features footage from the camera he was holding. Other works made use of delayed streams and spatial effects to mess with the linear flow of time, something that Graham claimed Minimalism had failed to do.

By the mid-’70s, Graham was making prominent use of mirrors, which he used to reflect back the audience in performances and to distort viewers’ surrounding environments in sculptures. Graham has assigned various meanings to his mirrors over the years., connecting it to Sartre’s Being and Nothingness (1943) and corporate architecture of the ’70s. In Performance/Audience/Mirror (1972), Graham had his audience sit before a mirror and described to his viewers’ movements to them. Then he turned toward his own reflection and narrated how his own body functioned in the space. “First, a person in the audience sees himself ‘objectively’ (‘subjectively’) perceived by himself, next he hears himself described ‘objectively’ (‘subjectively’) in terms of the performer’s perception,” he wrote.

The works for which Graham is best known, his glass pavilions, resemble clear architectural spaces that afford audiences unusual views of the spaces surrounding them. These are made with two-way mirrored glass, which “reflect[s] the sky,” Graham said in a 2014 interview with Artspace. “But then it becomes surveillance, as well—you can see out, but you can’t see in.” One intended as an “urban park” was built atop the roof of the Dia Art Foundation in 1991, and was sited there until the space’s closure in 2004; a curvaceous sculpture related to the pavilions appeared on top of the Metropolitan Museum of Art in 2014. Many more popped up in areas that are not quite considered art spaces—near the Arctic Circle in Norway, for example.

While within the art world Graham is known for artworks like the pavilions, he has also developed a cult following beyond it for one work in particular: Rock My Religion (1984), a 55-minute-long montage that links rock ‘n’ roll to a whole lineage of religious music that begins with the Shakers. Kim Gordon and Thurston Moore provided the soundtrack for the video, which is, in a way, Graham paying homage to the rock music that influenced him.

Graham’s storied career has been widely recognized by various institutions across the world. He appeared in four editions of Documenta, three editions of the Venice Biennale (not counting an inclusion in the Venice Architecture Biennale, a rarity for visual artists), three editions of the Whitney Biennial, and two editions of Skulptur Projekte Münster in Germany. His 2009 U.S. retrospective, “Beyond,” appeared at the Whitney Museum in New York, the Museum of Contemporary Art in Los Angeles, and the Walker Art Center in Minneapolis.

Graham, who was long based in New York, claimed in a 2009 Art in America interview that he had trouble gaining recognition for his work in the city. That had not stopped a legion of contemporary artists from making the journey to his $450-a-month apartment on the Lower East Side to hear from him. He was known to enchant visitors with pithy meditations on the self-seriousness of the art scene of the ’70s and the latest comedies playing in multiplexes near him. He often seemed to take just as much pleasure in reading the writings of Guy Debord as he did in watching a gross-out comedy starring Seth Rogen.