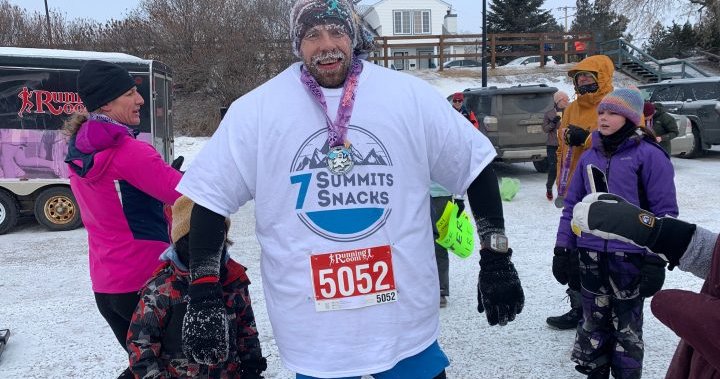 During the Hypothermic Half Marathon, David Eliuk set out to break the Guinness World Record for most shirts worn during a half-marathon.

“It feels great to be done. I had an amazing team behind me.”

According to Eliuk, the old record was 76 shirts.

“Unofficially we are going to call it 90 — so breaking the record by a decent amount — and hopefully, that stands for a long time.”

The unique feat wasn’t without its challenges. Eliuk said about two kilometres into the race, his left arm started to tingle.

“I had a lot of issues with constriction on my arms in the first lap and the crew was able to help me get through that,” Eliuk said.

Eliuk trained for about five months — adding 12 shirts every two weeks to get used to the weight and arm movement restriction.

Why did he do this? To remind people it’s OK to have fun, he said.

“There’s so many things happening in the world right now that are just not great,” Eliuk said.

“If this running down the neighbourhood wearing 100 T-shirts, 90 T-shirts makes someone smile and make somebody’s day better and laugh, then I’ve done my little bit.’

Eliuk’s family was cheering him on Sunday, including his son Henry.

“I think it’s really cool that he’s trying to do something fun during the pandemic,” Henry said.

Eliuk inspired his son to beat a record of his own.

“I love inspiring my kids and for them to be curious about these things and trying to achieve amazing things,” Eliuk said.

While it’s not yet official, Eliuk is letting this win sink in — open to attempting other records down the road.