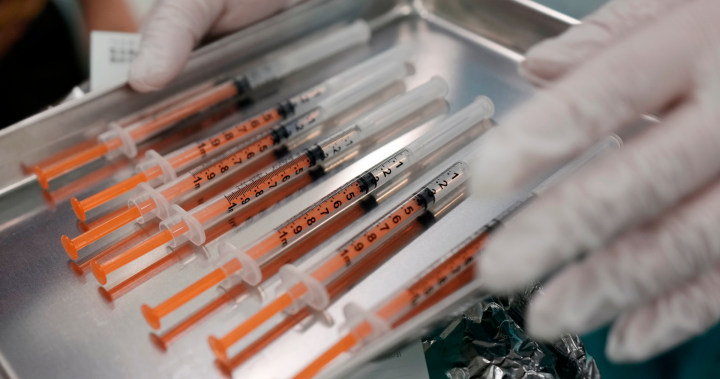 A pair of Hamilton’s COVID-19 vaccine clinics will begin offering walk-in third doses for those aged 5 to 11 starting Monday.

The move comes days after the city’s medical officer health Dr. Elizabeth Richardson said “accessibility” to the shots have been open, with many unfilled appointments targeting the age group.

“Currently, we’re sitting at 38 per cent of children, five to 11 years of age, having received a first dose,” Richardson said.

“We’ve had a significant amount of excess accessibility at open appointments over the last several weeks for children in that age group, so very much encouraging people to come forward.”

The participating clinics are Lime Ridge Mall on the Mountain as well as the Centre on Barton in the city’s east end. More locations are set to be revealed in the coming days and weeks.

Earlier this week, Hamilton’s Centre on Barton COVID-19 vaccine clinic began offering walk-in third doses for those aged 50-plus as of Wednesday.

So far, only about 36 per cent of those in the city under 50 and eligible for a booster shot have actually gotten one.

“We should be able to meet the demand for anybody who wants a third dose to have one by the end of this month,” Richardson said.

The province opened up third doses for Ontarians in mid-December and to date, all individuals eligible for a booster dose have been required to book an appointment.

Hamilton’s health partners administered over 8,700 vaccine doses on Thursday, a decrease of about 900 shots day over day.

The number is on-par with the total doses given out across the city on the same day last week, which was slightly lower at 8,449.

Close to 45,000 doses have been administered over the past seven days, which is up from the estimated 41,000 given out the seven days before.

Over 79.8 per cent of eligible Hamiltonians aged five and up have had a pair of doses while 85 per cent have gotten at least one shot.

About 86 per cent of residents aged 12-plus have had al least two shots, while about 88.8 per cent have had a first dose.

The city is still behind the provincial average, which has 88.3 per cent of those 12-plus with two doses and 91 per cent with a single dose.

More than 91 per cent of those aged 60-plus in the city have had two shots, while more than 50 per cent have had a booster.

Excluding kids aged five to 11, Hamiltonians in the 12-to-24 age group represent the lowest vaccination rates of those eligible in the community at just over 79 per cent having had a pair of doses.

61 institutional COVID-19 outbreaks in Hamilton, 28 in facilities with seniors

As of Friday, Hamilton has 28 institutions with seniors in a COVID-19 outbreak, accounting for 183 of the city’s estimated 450 unresolved cases tied to surges.

Public health has connected the Wellington Nursing Home on Upper Wellington Street to 45 cases  — the largest of all the ongoing outbreaks as of Jan. 7.

The Hamilton-Wentworth Detention Centre is not too far behind with 31 cases, up 13 day over day.

St. Joe’s has six of the surges tied to 65 cases, while Hamilton Health Sciences (HHS) has seven outbreaks affecting 91 people.

Over 7,500 active cases were reported by the city on Friday, but public health notes the number is underestimated due to the province’s recent change in its testing strategy.

Close to 44 per cent of those cases are people aged between 20 and 39.

Hamilton’s seven-day case average has dropped a bit week over week from 722 per day last Friday to 634 as of Jan 7.

Combined, Hamilton’s hospital network has 248 COVD patients including 33 in ICU.

There are close to 900 health-care workers total between St. Joe’s and Hamilton Health Sciences that are now isolating due to a potential COVID exposure.

The city’s positivity rate — representing the number of tests returning from Ontario labs as positive — has ballooned week over week from 8.30 per cent to 31.2 per cent as of Friday.

One more COVID-related death was recorded for Friday, a person over 80.