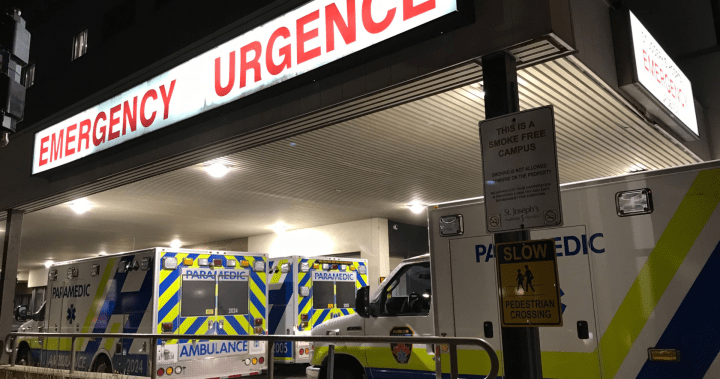 The regional network that manages critical care capacity in a number of communities near the Hamilton-area says the situation continued to worsen last week despite city hospitals reporting a decline in COVID-19 hospitalizations.

The assertion comes as the networks revealed 21 patients needing 24-hour medical care were transferred to other facilities over the last three weeks. That’s up from the 10 reported two weeks ago.

“To ensure available critical care capacity in the region for patients who require it, HNHBB hospitals have undertaken a common approach to identify and, if necessary, direct transfers of critical care patients to other hospitals outside of the region,” the group said in the statement on Friday.

‘Hopefully this is the last time’: Ontario businesses reopen with cautious optimism

St. Joseph’s Healthcare Hamilton has been reporting regional transfers for January and said so far the moves have been confined to HNHBB hospitals, west and central region facilities.

“Since the beginning of the new year, increasing pressures on hospital capacity made it necessary for St. Joe’s to transfer less than five patients to health care facilities elsewhere in Ontario West and Ontario Central,” spokesperson Maria Hayes said in an email.

“The patients require critical care, but we are unable to provide more information for privacy reasons.”

2:06
A near two year timeline of Ontario’s lockdowns and reopenings

Hayes said although no transfers have been made beyond west and central region facilities, patients can be transferred to other regions as well if needed.

Here’s what’s open at 50% capacity in Ontario on Jan. 31 as restrictions ease

Spokesperson Wendy Stewart could not share specific details for privacy reasons but did say the patients transferred were sent to the GTA and London and area hospitals.

Both networks say the decisions on when and where a critical care patient is sent occurs through a “rigorous process” involving clinical experts and hospital leadership.

Despite the strain critical care services, Hamilton’s two hospitals combined reported a decline week over week in hospitalizations moving to 260 total COVID patients than the 281 recorded on Jan. 24.

Overall, 38 people with COVID-19 are in the city’s intensive care units (ICUs) as of Jan. 31, a common number seen since New Year’s Day with the networks averaging 34.7 ICU occupants every day.

HHS facilities have the most ongoing cases, 195 hospitalizations and 22 in ICUs.

Adult ICU occupancy at HHS has also dropped since last Thursday moving from 97 per cent to 84 as of Monday. However, those occupancy for adult acute care patients remains over 100 per cent.

St. Joe’s is reporting an ICU occupancy rate of 96 per cent.

Ontario is reporting 2,983 people in hospital with COVID on Monday with 583 in intensive care units.

Both networks continue to see a drop in the number of staffers isolating for COVID, both HHS and St. Joe’s have about 403 in the protocol. Last Monday, the hospitals reported a combined 609 isolating.

Outbreaks also appear to be subsiding with just nine ongoing surges tied to 43 combined cases, 41 of which involve patients.

Last Monday, both HHS and St. Joe’s had 14 outbreaks tied to a combined 151 patients.

Non-urgent surgeries, put on hold in early January to preserve Ontario’s hospital capacity, will resume this week in tandem with the lifting of public health restrictions on businesses and social gatherings.

HHS says it has begun planning for the resumption of non-urgent/non-emergent care and said in a statement late last week that it will be a “gradual ramp-up” in keeping with current heavy demands that still exist in both critical care and in-patient units.

“We acknowledge that our teams are still managing extraordinary volumes and capacity issues,” hospital execs said in a note to staff.

“Accordingly, we will carefully plan the reintroduction of services, guided by the advice from members of our various task forces and the HHS ethical framework.”

The number of overall institutional COVID-19 outbreaks in Hamilton dropped slightly on the weekend moving to 57 from the 61 reported on Friday.

Just under 1,300 total cases are connected with the surges which includes 867 a part of 26 outbreaks in homes containing seniors.

Just under half of the cases in the homes are with health-care workers, with about 318 in LTCHs.

4,008 people in Ontario hospitals with COVID, 626 in intensive care

The city’s largest outbreak is at the Heritage Green Nursing home, which has 110 cases as of Jan. 31 with 61 tied to residents.

The city has been recording an average of about two deaths per day since Jan. 1.

Eight of the last 13 deaths have been among people over the age of 80.

So far the city has posted 57 COVID-related deaths to its online dashboard since the start of January.