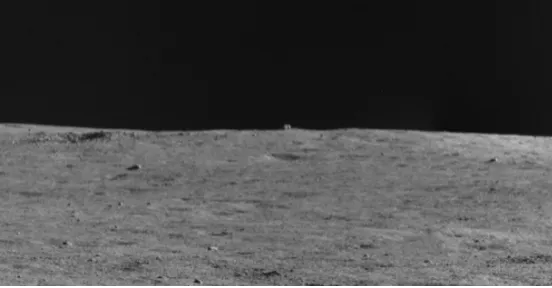 China’s moon rover, Yutu-2, has spotted something strangely geometric on the moon’s surface and is now on its way to check out the mysterious cube captured in photos.

The robotic rover was travelling along the Von Kármán crater on the moon’s far side when it captured photos of a cubic-shaped object about 80 metres in the distance, reports Space.com.

Our Space, a Chinese outreach channel with affiliations to the China National Space Administration, called the unidentified shape a “mystery hut.”

The solar-powered robot was too far away to capture the true nature of the mystery object, but will take the next two to three months — or two to three lunar days — travelling toward the object to get a better look.

Space journalist Andrew Jones, who tracks China’s space programme, tweeted about the rover’s finding late last week, pointing out it’s “hard to discern” from the photo what the object could be, but ruled out an obelisk or aliens. He does wonder if it’s a large boulder that’s been excavated by an impact event.

Ah. We have an update from Yutu-2 on the lunar far side, including an image of a cubic shape on the northern horizon ~80m away from the rover in Von Kármán crater. Referred to as “神秘小屋” (“mystery house”), the next 2-3 lunar days will be spent getting closer to check it out. pic.twitter.com/LWPZoWN05I

In its Yutu-2 diary, Our Space notes there is an impact crater near the cube, so Jones’ theory could be the answer.

Our Space even had a little bit of fun, jokingly asking if it is “a home built by aliens after the crash landing? Or is it the pioneer spacecraft of the predecessors to explore the moon?”

Yutu-2 recently surpassed its 1,000-day milestone on the moon, after its lander touched down on Jan. 2, 2019. Despite the intense temperature swings that occur between day and night on the moon, it’s still working well, says the China Lunar Exploration Program.

The spacecraft often shuts down during the lunar night, which lasts about 14.5 earth days.

1:53
Chinese rover touches down on far side of the moon