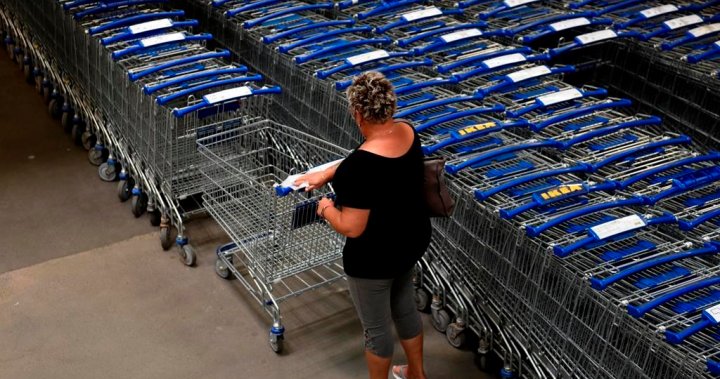 The additional charge is sending the cost of shipping goods within Canada higher, topping 40 per cent for some carriers.

For stores with high online return rates, such as apparel and footwear companies, the increased cost of shipping can be especially challenging.

With inflation squeezing consumers and an ongoing battle for online dollars, she said retailers are reluctant to pass on costs.

“Retail is one of the most competitive industries in Canada, so raising minimum free shipping thresholds or adding surcharges to consumers directly is often done as a last resort,” she said.

“The idea of ever being in equilibrium around fuel prices or containers or what’s happening with worldwide supply chains is long gone,” Indigo Books & Music Inc. president Peter Ruis said in an interview.

“We’re absolutely clear that especially at the moment with inflation and how customers are feeling … we will not want to be raising prices,” Ruis said.

Instead, the company is focused on developing the ability to ship from local stores, rather than from a centralized warehouse, to cut down on shipping costs.

“In October we launch our new website which will have a ship from store facility, which means we can use all of our stores as a warehouse for the online consumer,” Ruis said. “If someone’s in Halifax, we could choose to send them product from the Halifax store rather than from the central (distribution centre) in Toronto or Calgary.”

He added: “In a situation where the fuel charges are really difficult, we can mitigate that by sending stock locally.”

Canadian underwear and apparel brand Knix Wear Inc., which does most of its sales online and offers free return shipping on most orders, said it doesn’t plan to change the qualifying threshold for free shipping.

“We know there are several external factors affecting shipping and costs but we do not want our customers to feel those impacts,” company spokeswoman Emily Scarlett said.

Fuel surcharges on shipments within Canada are subject to weekly adjustments based on a rounded average of the Canadian diesel retail price per litre, James Anderson said in an email.

For packages outside the country, the company bases its fuel surcharge on a rounded average of the U.S. Gulf Coast spot price for a gallon of kerosene-type jet fuel, he said.

The FedEx Express fuel surcharge is currently 41.50 per cent within Canada, and 26.50 per cent on international shipments.

DHL Express said it applies the fuel surcharge to offset fluctuations in fuel prices, which can impact the cost of transportation services _particularly for the company’s aviation fleet.

The fuel surcharge for international shipments is set at 25 per cent for July 2022, according to the company’s website.

Canada Post’s fuel surcharge on domestic services is currently 37 per cent, while its international parcel service is 21.75 per cent, according to its website.