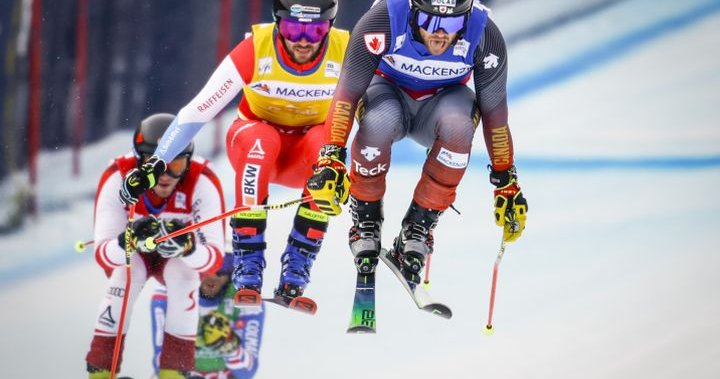 The 33-year-old from Toronto was second Friday at Nakiska ski resort for his first World Cup medal since breaking his leg in a race Dec. 20, 2020.

Saturday’s second World Cup at Nakiska is the host Canadian team’s last tune up race before Beijing’s Winter Olympics next month. The Canadians won’t travel to two races in Sweden next week because of COVID-19 concerns.

The country is deep in ski cross talent, so there’s internal competition at Nakiska for Olympic berths.

Drury says his leg is fully healed and doesn’t slow him down, but he lost training days to rehabilitating it in 2021. His first pass down a ski cross course following the injury was a November training run in China.

“I was about 35 days behind the rest of my team,” Drury said. “I’ve just been trying to build back up to my top speed, build my confidence up on the track, finding balance in my aggression.

“It’s starting to trend in the right direction.”

Germany’s Tobias Mueller was third. Drury was the only Canadian to reach a final Friday.

The top two skiers in each elimination-round heat advance. After handily winning his quarterfinal, Drury outmuscled Bastien Midol of France in a semifinal turn to take second and move onto the four-man final.

“I felt him when he went inside on that last turn to what we call the GS section and I just kind of said to myself ‘no, I’m not backing off,”’ Drury said.

“I didn’t have the best starts today. We kind of knew coming in that there wasn’t going to be a lot of passing opportunities today just because of how quickly it went from turn to turn and how fast it was, but I somehow figured out a couple ways to get around a couple people in key situations.”

Sweden’s Sandra Naeslund took the four-woman final ahead of runner-up Fanny Smith of Switzerland and Daniela Maier of Germany in third.

Seven Canadian women were among the 16 advancing out of Thursday’s qualifying, but their ranks were beset by bad luck Friday.

Olympic gold medallist Marielle Thompson of Whistler, B.C., got hung up on the rollers coming out of the start gate and didn’t make it out of her quarterfinal.

Hoffos and India Sherret of Cranbrook, B.C., banged into each other in the air off a turn, which sent Sherret into the safety netting in their quarterfinal.

Phelan of Mont-Tremblant, Que., an Olympic silver medallist in 2018, and Schmidt both skidded off course in their semifinals.

“That’s ski cross. Anything can happen,” Schmidt said. “You have luck some times. You don’t have luck other times.

“It was really tough racing out here today. Conditions were bumpy.”

The Canadians get another chance on home snow Saturday when Drury expects racing to be even harder.

“The hardest part about a doubleheader is everyone in the field gets to watch video from the race before,” he said. “Everyone on Day 2 is a little more aggressive. Everyone has seen where you can pass and where not.

“I’m just going to do my best and try and figure out the start and get ahead. If I get ahead, I don’t think anyone’s catching me. If not, it’ll be the same mentality of just battle. Take my opportunities when they come and get after it.”

Your questions and my answer | Health Beauty Herbal Ayurveda