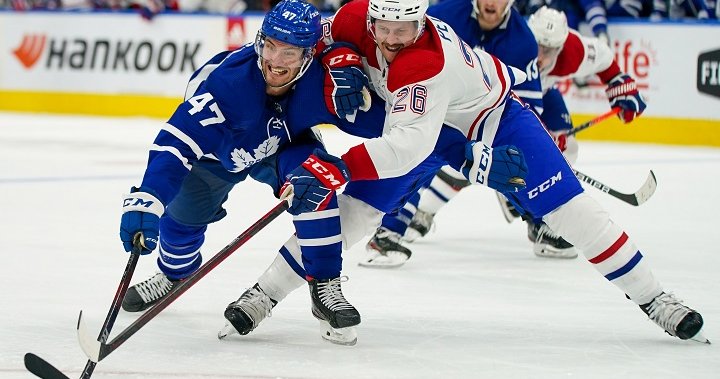 One of the highlights of the season for the Montreal Canadiens was at the Bell Centre a fortnight ago. There was finally a full house for an original six Saturday night match-up, and the fans were in fine form, loving the Canadiens’ 4-2 win over their arch-rival Maple Leafs.

Back in Toronto for the return match, the Leafs got their revenge with a 3-2 win.

A popular refrain when a young player ups their level in the league is to point out that it is a small sample size. Cole Caufield’s scoring sample size is getting big enough to not be dismissed. This might just be who he is under Martin St. Louis, and there is no great slow down in his scoring to come.

Perhaps just a little bit of a slow down is in the cards, because if this is the true pace of the rookie Canadiens winger, then this is one heck of a hockey player. It’s now 17 goals in the last 27 games under St. Louis after Caufield took a backhand pass from Brendan Gallagher, quickly moved it to his forehand, and wired it upstairs. Like he does.

If you extrapolate that 17 in 27 over an 82-game season, Caufield is a 50 goal scorer. Is Cole Caufield actually a 50 goal scorer in the NHL? Consider this as you ponder the answer: if Caufield can count 17 in 27 in his rookie year, what can he count in his fifth NHL season when he has figured out more of the rhythms of the league.

Call of the Wilde: Montreal Canadiens take down New Jersey Devils with 7-4 win

If he is not a 50-goal scorer in the league, surely he is a 40-goal scorer. What a draft pick by Trevor Timmins. He has taken so much heat for not getting it done with a 25 pick or two. All he needed was to draft 15th in what is one of the greatest thefts of the last decade if Caufield’s small sample size stays true.

One piece of good news is Jonathan Drouin had surgery on his right wrist in New York City to repair torn ligaments. Earlier, Drouin was told he needed surgery by one doctor, but he said that he wanted to get a second opinion.

The surgery was performed on Friday. Drouin has not been the same since his first wrist surgery. He can’t get his shot away like he could before. Hopefully, this surgery will take well and he can have two good wrists for the final season of his contract.

Expectation is that he will be ready in the fall to try again to find the form that made him one of the most highly touted juniors in the last 20 years. Drouin has a lot to prove next season, and if he doesn’t, it will be quite interesting to see where the future takes him.

Call of the Wilde!

Back to Saturday night, It was a poor first period for the Canadiens. Firstly, they became the club to move into the history books when Auston Matthews scored his 50th goal in his last 50 games. It’s the first time that a player has managed the feat at any point in a season since 1996 with Mario Lemieux.

What’s worse is on the Matthews goal, Jake Allen suffered an injury. It looked like he stretched out too hard, so the first guess is groin, though it can be any number of pulled muscles with that type of movement.

Sam Montembeault came into the line-up and on the first shot he faced, it was Matthews who scored again. He moved to 51 goals in 50 games and on the season, a total of 58 goals. Only two active players have 60 in a season: Steve Stamkos and Alexander Ovechkin. Matthews has ten games to get two more goals for that plateau as well.

The Canadiens have improved a lot in the last 27 games under Martin St. Louis, but on some nights, you can see they have a bit to go before they are top five in the league like Toronto. At one point in the first period, the shots on goal were 17-3 for Toronto.

This Montreal club still has some talent to acquire, and some growth to go, especially on the blue line where the youth will learn how to handle this type of big energy with more experience. On the positive side, a Martin St. Louis team does not give up after 17-3 shots against; instead, they find their pride and stay fighting.

Call of the Wilde: Montreal Canadiens doubled by Ottawa Senators 6-3

The NCAA hockey tournament started with seven Montréal Canadiens prospects. If you had to pick who would be the only one to make it all the way to the final game, you likely would not have chosen Brett Stapley. The University of Denver is taking on Minnesota State for the championship in Boston.

Stapley is a seventh-round draft choice taken 190th overall. When he was drafted, it certainly didn’t cause much fanfare, of course. However, since then, Stapley has gotten better and better in his four years at Denver.

His senior season, Stapley counted 42 points in 40 games. That doesn’t mean an automatic contract for Stapley, though. He is 23 years of age, and the likelihood that he has a successful pro career is not a lock. It’s 50-50 whether he gets a contract offer from Jeff Gorton and Kent Hughes.

If Stapley doesn’t find a spot in the pros, he sure ends his time in college with some wonderful memories with Denver making it to the Frozen Four final. It was 1-0 Minnesota State over Denver in the third period at the time of publishing.